What every woman needs to know

What is an IUD?

An Intrauterine Device (IUD) is a small object that is placed inside a woman’s uterus (womb) for the purpose of preventing or interrupting pregnancy. IUDs are considered to be long acting reversible methods of contraception (LARC).1

Currently, there are two kinds of IUDs available in the United States: the Copper-T IUD, made from plastic and copper, and the levonorgestrel intrauterine system (IUS), a plastic device that releases hormones. 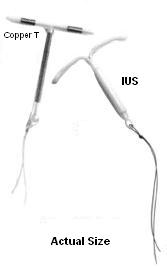 IUDs work against pregnancy in several ways. Some of these effects take place before fertilization, and others take place after the sperm and egg have united to form a new human being.

Both the copper-T and the IUS irritate the inner lining of the womb, causing inflammation.4 This is the same reaction the body has to any foreign object, such as a splinter under the skin. In the reproductive system, inflammation causes some cells to attack and destroy sperm, ova, and any newly formed embryo.

The IUS releases a synthetic hormone (progestin) that has several effects in the female reproductive system. In each normal cycle, the womb builds up tissue and chemicals that help with sperm survival and movement and also support implantation (the process by which a new embryo attaches to the womb to obtain nourishment to sustain life). The hormones released by the IUS (a) make the lining of the womb thinner so that sperm do not survive or move as well and, if fertilization occurs, the new embryo usually cannot implant in the mother’s womb,5 (b) can thicken the cervical mucus, reducing sperm movement and vitality, and (c) cause a small reduction in ovulation (about 15%). The new IUS with lower doses of progestin are unable to stop ovulation.6

Do the IUD and IUS cause abortion?

Using mathematical models, it has been estimated that a woman using the IUD will have from about 0.2 to 1.8 abortions (destruction of a new human life) per year caused specifically by the IUD/IUS.4

What are the risks from using an IUS?

What are the risks from using a Copper-T IUD?

Warning! The IUD does NOT protect against sexually transmitted infections, including AIDS.

Does an IUD have a permanent effect on a woman’s fertility?

The synthetic hormone in the IUS can cause a delay in the return of menstruation and fertility after it is removed.

If perforation or pelvic infection occurs while using the IUD, the uterus or Fallopian tubes may become damaged, thus reducing the possibility of pregnancy.

In cases of perforation of the uterus, a hysterectomy (removal of the uterus) may be required, resulting in permanent sterility.

What are my options?

If you are single, abstinence is the best option and always works!

If you are married, the modern methods of Natural Family Planning (NFP) are the safest, healthiest, and least expensive approaches to family planning.

Where can I learn more about  Natural Family Planning?

The Couple to Couple League

Family of the Americas Foundation