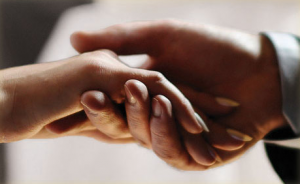 “…what God has joined together, no human being must separate.” Mk 10: 9

“But from the beginning of creation, ‘God made them male and female. For this reason a man shall leave his father and mother [and be joined to his wife], and the two shall become one flesh.’ So they are no longer two but one flesh. Therefore what God has joined together, no human being must separate.” Mk 10:7-9

Jesus spoke these words in response to the Pharisees’ questions about divorce—in particular Moses’ allowance of a decree of divorce. The 40-50% divorce rate in the USA indicates that Jesus’ teaching that “no human being must separate” husband and wife is largely ignored.

“God created mankind in his image; in the image of God he created them; male and female he created them. God blessed them and God said to them: Be fertile and multiply; fill the earth and subdue it.” Gen 1: 27-28

The joining of love and life in marital sexual intercourse—the marriage act—is a second God-ordained joining not intended for Man to separate by contraception.

US Catholics divorce and contracept at about the same rate as non-Catholics. Annulment application is commonly offered in response to divorce. For most Catholics, their teaching on contraception has been nil. It is estimated that 60-90% of annulments world-wide are granted in the USA. Also studies indicate that almost all Catholic couples contracept before and during some part of their marriage.

What the Chart Shows 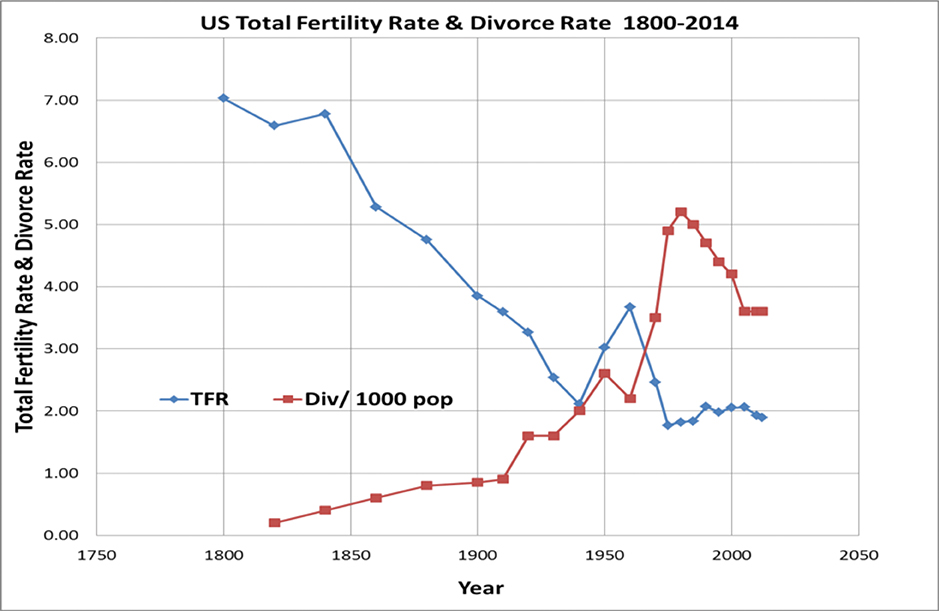 The enclosed Total Fertility & Divorce Rates chart demonstrates a strong correlation between family size and divorce. Why did family size begin a steep decline in the mid-1800s? Andrea Tone, in Devices and Desires, A History of Contraceptives in America, describes how Charles Goodyear’s 1839 invention of rubber vulcanization transformed a small but thriving side-line to sausage making into a lucrative condom manufacturing industry that continues into the 21st Century. Contraceptive use is the only feasible explanation for the rapid decline in Total Fertility Rates (TFRs) during the 19th and 20th Centuries. Note that TFRs dropped by almost half in each Century, and they have hovered a little below 2 during the 21st Century.

The Divorce Rate increased 2.5 times following wide acceptance of the Birth Control Pill in the early 1960s. No-fault divorce laws and legalized abortion were further consequences of over 10 million women being on the BCP and millions more continuing to use barrier and other means to limit child-bearing.

In God’s first words to us, He commanded us to “be fruitful, multiply and fill the earth”—a single command stated three times. He must have thought it pretty important. In humility and trust, He surrendered to His creatures the duty and power to initiate a new human life, while retaining His right to allow that initial effort to succeed. We call that sacred act of initiation “marital sexual intercourse”.

Marriage publicly identifies the family as an institution formed by a man and woman engaging in sexual intercourse, and children that result from their union. Thus marital sexual intercourse is referred to as the “marriage act” or the “procreation act”—recognizing its essential and unique purpose of creating new human life with God. It is these procreative and unitive ends that “God has joined together [and] no human being must separate”.

Why is this so?

If the act which is primarily intended for procreation is counterfeited (neutered) by contraception, the act cannot achieve its intended and natural purposes—neither procreative nor unitive. A holy act has been hollowed out and made intrinsically evil. It should be expected that contraceptive-using-couples will feel dissatisfied, incomplete and expectant of something more. That missing more may be sought in another relationship, pornography, or other addictions. The stage is thus set for divorce.

The cultural chaos caused by divorce is due in large part to the effect of contraception on marriage. Separating the unitive and procreative ends of sexual intercourse redefines and destabilizes marriage. In God’s perfect plan for us, there would be no contraception, the average family would include many children, and divorce would be rare.

Has there ever been a time in history (or a culture) when both contraception and divorce were absent? What was that society like? Can a contraceptive and divorce free society be created? Can we humbly set aside our plan, and accept God’s plan for love, marriage, sex and children?

Conclusions Suggested by the Chart:

1. The “natural” Total Fertility Rate (TFR) may be as high as 7. With limited availability of contraception, the average American woman of the early 1800s birthed 7 children. Is that what God planned for average family size? The corresponding “natural” divorce rate is essentially zero.

2. The vulcanization of rubber by Charles Goodyear in 1839 jump-started the contraceptives industry with condoms and diaphragms. As contraceptives began to be readily available in the mid-1800s, TFRs rapidly declined.

3. The low TFRs during WWII (1941-1945) were followed by a jump in TFRs as millions of soldiers returned to marry and start families in 1945-1960. High divorce rates during and after WWII may be a result of long separations and mental and physical health problems of returning soldiers.

4. The advent of the Birth Control Pill (BCP) in the early 1960s and the universal acceptance of all forms of birth control soon fixed TFRs at about 2 (or less) for the 40+ years from 1970 to 2014. Divorce rates increase as TFRs decrease.

5. Rapid acceptance of the BCP in the 1960s corresponds with divorce rates more than doubling in 10 years.

6. While TFRs have held steady near 2 for the past 40 years, divorce rates have steadily declined to 1960’s levels possibly due to slow economic growth, fewer marriages reducing the pool of potential divorces, and aging couples’ greater tolerance of a less than ideal marriage.

7. Contraceptive use destabilizes and redefines marriage.