What is “emergency contraception”?

Emergency contraception (EC) is the use of pills or devices after sex to try to prevent pregnancy.1 EC is promoted when a woman has been raped, when a couple has chosen to have sex without using any form of contraception, or when there is a suspected contraceptive failure. Types of EC may include pills or the insertion of the Copper-T Intrauterine Device (IUD) up to five days after intercourse. The use of other drugs as emergency contraception is under investigation.2

What is the “Morning After Pill”?

The phrase “Morning After Pill” (MAP) describes a set of contraceptive pills taken after a sexual act, to prevent pregnancy. One type of MAP contains only the synthetic progestin levonorgestrel (LNG), which is the main drug in other commercial contraceptives. Commercial names for the MAP include Plan B One Step, Take Action, Next Choice One Dose, My Way, and others.3 The Food and Drug Administration has approved Plan B One Step for sale without age restrictions. A second type of MAP is the anti-progesterone “Ella”, available with prescription in the United States. A third type of MAP is the “off label” use of combined oral contraceptive pills. A fourth type of EC is the abortion pill Mifepristone (RU 486), used outside the USA.

How does the Morning After Pill work? 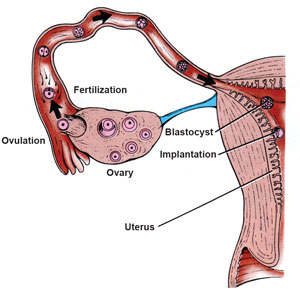 The new baby (blastocyst) migrates from the fallopian tube to the uterus where it implants 5-7 days after conception.

Conception of a new human being is possible only during a few days in the woman’s cycle. Sperm can survive in the woman’s body 3-5 days, and the ovum dies 12-24 hours after ovulation. Fertilization normally occurs in the fallopian tube after ovulation. The new human being (blastocyst) moves from the fallopian tube to the uterus where it implants 5-7 days after conception. A delicate hormonal balance is necessary for the baby’s survival.

Some studies seem to show that Plan B works by changing the cervical mucus or by attacking sperm. More recent studies, however, show that these effects may happen when the drug is taken regularly (like birth control pills), but NOT after one dose (like EC).4,5

Advocates of EC claim that the active ingredient in Plan B works mainly by stopping or delaying ovulation Available studies show that when Plan B was given to women in the fertile part of their cycle, 80% OR MORE of them ovulated, although NONE of them became obviously pregnant (see diagram below).6,7 If sperm and an egg are present in the woman’s body but no obvious pregnancy develops, then abortion is the most likely cause.8 Some studies also show that Plan B disturbs the hormonal balance needed to maintain pregnancy.9,10

What about other types of emergency contraception?

Copper-T IUDs—Copper ions released from an IUD are toxic for sperm and the ovum, decreasing the probability of fertilization.11  Also, the Copper-T IUD lowers the chances of survival of any embryo that may be formed before it reaches the womb. The Copper-T IUD stops the lining of the womb from accepting a newly formed embryo.12 Thus the Copper-T IUD may have a post-fertilization effect, meaning it destroys a young human embryo.

Ella and Mifepristone (RU-486) change the body’s ability to react to some hormones. They can block the action of the hormone progesterone,13 thereby destroying a new human life through chemical abortion. Ella can also delay or block ovulation if taken before ovulation.14

If conception (fertilization) has already taken place, then the only way the IUD and the morning after pill (MAP) can be effective is by destroying the new life. When a woman takes theses pills or when the IUD is inserted, there is currently no way for her or her doctor to know whether or not she has already conceived. A pregnancy test cannot give this information before implantation. Whenever these pills are taken, or a Copper-T IUD is inserted after sexual activity, there is the risk that a new human life will be destroyed.

Remember that
a new life is
destroyed
when implantation
is prevented.

Does this mean that emergency contraception is an abortifacient— that it can cause an abortion?

A new human life begins at conception, also called fertilization. However, in September 1965, the American College of Obstetricians and Gynecologists (ACOG) attempted to redefine “pregnancy” as beginning at the time of implantation, and not at the time of conception. The effectiveness of pills and devices that do not prevent fertilization depends on destruction of a new human life. This should be called an “abortion” in spite of the medical definition from the ACOG.

In a recent study 8 out of 10 women who took the MAP ovulated. This means that if they had sex, some of these 8 women likely became pregnant. None had an obvious pregnancy, so the women who became pregnant probably experienced an early abortion.

How effective is emergency contraception?

How safe is emergency contraception?

A Morning After Pill that contains LNG can cause heavier or lighter menstrual bleeding, nausea, vomiting, abdominal pain, fatigue, headache, dizziness, breast tenderness, delay of menses (up to 7 days), and diarrhea. The use of LNG also increases the risk of ectopic pregnancy.22 The use of Ella has been connected with headache, abdominal or upper abdominal pain, nausea, dysmenorrhea, fatigue, and dizziness.23 Women who use the Copper-T IUD can experience uterine cramps and other undesirable effects such as ectopic pregnancy, septic abortion, pelvic infection, perforation, embedment, anemia, backache, painful periods, pain during intercourse, vaginal discharges, prolonged menstrual flow, menstrual spotting, cramping, and vaginitis.24

One study reported that women may repeatedly use EC due to an exaggerated perception of its effectiveness.25 Another study found that over-the-counter access to EC leads to increased Sexually Transmitted Infections by approximately 12% for women ages 15-44 due to increased risky sexual behavior.26 More time and research are needed to know the long-term effects of emergency contraception on the health and safety of women.

Are there other options?

If you are single, the surest way to avoid pregnancy or a sexually transmitted infection is abstinence, and it always works. If you are married, the modern methods of Natural Family Planning (NFP) are the safest, healthiest, least toxic, and least expensive means for family planning. Victims of rape or sexual abuse need and deserve the best medical care and human support possible. The additional stress and health risks of emergency contraception add further harm. (Pregnancy due to rape is estimated at 5%).27 For the vast majority of these women, emergency contraceptives impose significant health risks with no benefit. If conception has already occurred, then a very early abortion is the only means for emergency contraception to be effective. Abortion carries with it many serious adverse consequences such as increased rates of breast cancer, depression, anxiety, suicidal behaviors, and substance use disorders.28 A far safer approach is to carry the child to term. Adoption is always an option.

Confidential pregnancy assistance services are available throughout the U.S. and Canada by calling Option Line at 800-395-HELP (4357) and Abortion Pill Reversal Network at 877-558-0333.

18. Walsh TL, Frezieres RG. Patterns of emergency contraception use by age and ethnicity from a randomized trial comparing advance provision and information only. Contraception. Aug 2006; 74(2): 110-117.