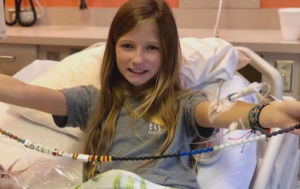 [8]Doctors can’t explain how an 11-year-old girl from Hays County, Texas was cured from an inoperable brain tumor.

The little girl went through weeks of radiation and all her parents, Gena and Scott Doss, could do is pray for a miracle.

“When I first saw Roxli’s MRI scan, it was actually unbelievable,” said Dr. Harrod. “The tumor is undetectable on the MRI scan, which is really unusual.”

“[Doctors] at Dell Children’s, Texas Children’s, at Dana-Farber, at John Hopkins, and MD Anderson, all agreed it was DIPG,” said Scott Doss.

And now with no trace of the tumor, the family is thanking God.

The family tells KVUE they will continue to watch her closely and continue to undergo treatments as a precaution.

Most people ask for assisted suicide because they have given up hope or they fear for their future.

LifeNews.com Note: Alex Schadenberg is the executive director of the Euthanasia Prevention Coalition [11] and you can read his blog [12] here.