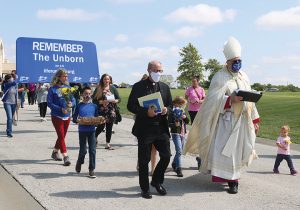 [8]All across the country last weekend, pro-life advocates gathered to pray and remember the unborn babies who have been victims of abortion.

In Kansas City, Kansas, Catholic Archbishop Joseph Naumann led pro-lifers in mourning for the unborn at the Gate of Heaven Cemetery, one of 54 memorial sites for aborted babies in the U.S., according to The Leaven [9], the newspaper of the Archdiocese of Kansas City.

Local pro-life organizations sponsored the event, and Naumann spoke about the value and dignity of every human life, the report states.

In Pennsylvania, another group of pro-lifers placed flowers on a memorial for aborted babies at St. Jerome’s Cemetery in Tamaqua. The Republican Herald reports [10], during the special ceremony, pro-life advocate Cheryl Kiefer shared her testimony about aborting three of her unborn babies.

After her abortions, she said she turned to alcohol to drown out her pain and regret. Kiefer said God eventually changed her life, and now she looks forward to seeing her babies in heaven someday.

“He is here to forgive us and heal us,” she said. “I believe my babies are with God.”

Pro-lifers welcome Kiefer and others who have had abortions to mourn with them during the annual event.

The National Day of Remembrance for Aborted Children began in 2013 on the 25th anniversary of the burial of 1,500 abortion victims in Milwaukee, Wisconsin, according to the Pro-Life Action League. Since then, thousands more aborted babies have been buried in mass graves, including 47 victims of convicted murderer Kermit Gosnell in Philadelphia [11] and 2,411 victims of Indiana abortionist Ulrich Klopfer in South Bend [12].

More than 100 memorial services were scheduled across the country this year.

“The National Day of Remembrance calls upon America to mourn for these children, to reckon with the absence that we’ve experienced because their lives were taken away,” Eric Scheidler, executive director of the Pro-Life Action League, told One News Now [13]. “Their lives were violently and unjustly ended through abortion.”

Scheidler said they welcome mothers of aborted children and fathers who have participated in, coerced or tried to stop the abortion of their child. He said the day is for everyone to “mourn for those children, to take stock of our involvement, and to seek God’s healing and mercy.”

The pro-life groups that lead the nation-wide effort are Citizens for a Pro-Life Society, Priests for Life and the Pro-Life Action League.

The U.S. Supreme Court forced states to legalize abortion on demand in 1973 through Roe v. Wade. Since then, nearly 62 million unborn babies have been killed in abortions.