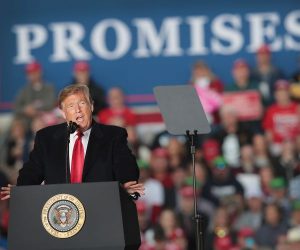 President Trump, in the stirring rallies he has been holding across the country [9] to show voters the tremendous progress we have all made under Republican leadership and the dangers we face from the Democratic Party, has called this an election of common sense. And he names this as his reason for embracing the policies he has been advancing.

There appear to me five immediate ways that common sense would lead us to vote Republican in the midterms of 2018.

1. When you are making progress, you keep going! The president’s rallies provide a handy checklist of tremendous progress towards making America great again. In less than two years, 4.2 million new jobs have been created. Unemployment is at its lowest in 50 years; female unemployment is the lowest in 65 years, and unemployment in other demographics, including the African-American community, are at all-time lows. The GDP is over 4 percent, median income up more than 4 percent, and wages are on the upswing. Consumer confidence has reached an 18-year high. Our military is stronger, a new trade deal with Mexico and Canada has replaced NAFTA, North Korea is no longer shooting off rockets, veterans are receiving better care, taxes are lower, and religious freedom is more secure. And that’s not the half of it.

Common sense would dictate that if you’re getting good results, you have a good thing going. You don’t change course; you don’t, at a point like that, put leadership in the hands of the opposing political party.

2. If you don’t have borders, you don’t have a country. This is as self-evident as saying if you don’t have a front door, you don’t have a house. Even the Vatican has very high walls protecting its boundaries. Yet the Democratic Party is full of advocates of “open borders,” people who are either oblivious to the dangers of just letting anyone walk in to their country (or their house), or who think that the rest of us are oblivious. Strong borders, and a willingness to insist on laws that control who crosses them, have never constituted prejudice against anyone who wants to come in, or a lack of appreciation of the tremendous value and blessing that immigrants bring to our nation. Rather, it’s just, well, common sense.

3. Everyone is innocent until proven guilty. This bedrock principle of our legal system, and of civilized society, was thrown out the window by the Senate Democrats and their allies during the recent Kavanaugh hearings. The lesson here for the midterms is that this was not an aberration, but rather has now become the modus operandi of Democratic opposition to the progress the Republicans are making in transforming the courts. I looked and listened in vain to hear a simple, straightforward answer from the opponents of Kavanaugh to the question, “Isn’t he to be presumed innocent until proven guilty?” but, sadly, their answers lacked the requisite simplicity and common sense.

4. You don’t give matches to an arsonist, and you don’t give political power to an angry mob. This has been one of the president’s best quotes in his rallies, referring to the very disturbing behavior of Democrat-supported left wing groups who pounded and clawed at the doors of the Supreme Court recently, and, following the advice of Democratic members of Congress like Maxine Waters and Cory Booker, got in the face of Trump supporters and drove them out of restaurants. Neither should voters lose sight of the “logic” of Hillary Clinton. She recently declared that you cannot be civil with a political party that opposes what you stand for, and that civility will return only when the Democrats return to power. This means either that what Republicans stand for doesn’t matter, and therefore can be destroyed by Democrats without any reaction, or it is an unintended compliment that Republicans and their allies know how to disagree peacefully, and use the processes America provides for making peaceful change rather than resorting to mob rule. In any case, commonsense dictates not to give matches to arsonists.

5. You don’t kill babies. The arena of my own fulltime advocacy is that of calling for the protection of children in the first nine months of their existence. I never cease to be amazed at the blind spot that the Democratic Party has to the children in the womb. The fact that they are human is common sense. And the duty of any civilized society to protect its youngest children is self-evident. If you analyze the roll call of the all the abortion-related votes in the current 115th Congress as well as in the 114th Congress, you will see that every one of them broke down along party lines. Whether it was about direct protection of the babies in the womb, or the financing of abortion, the Republicans always voted in favor of protecting these children and the Democrats always voted in favor of abortion. The crossover votes in each case were either non-existent or could be counted on one hand. There was even a vote on whether to protect babies born alive after a failed abortion, and the Democrats opposed that too. To lack common sense on something as basic as the protection of children is the most disturbing point of all.

The president is right. The midterms of 2018 really don’t require complex analysis of political trends or a highly nuanced understanding of the many issues confronting our nation and its leaders. It really is an election of common sense. And it is a moment to pray that common sense prevails.

Fr. Frank Pavone is one of the most prominent pro-life leaders in the world. He became a Catholic priest in 1988 under Cardinal John O’Connor in New York. In 1993 he became National Director of Priests for Life [10]. He is also the President of the National Pro-life Religious Council [11], and the National Pastoral Director of the Silent No More Campaign [12] and of Rachel’s Vineyard [13], the world’s largest ministry of healing after abortion. He travels to about four states every week, preaching and teaching against abortion. He broadcasts regularly on television, radio, and internet. He was asked by Mother Teresa to speak in India on abortion, and was asked by then-candidate Donald Trump to serve on his Pro-life and Catholic advisory councils. He has served at the Vatican as an official of the Pontifical Council for the Family, which coordinates the pro-life activities of the Catholic Church. To read more of his reports — Click Here Now [14].