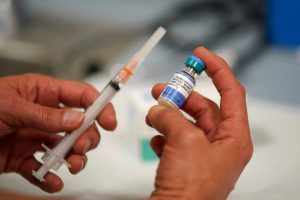 SALT LAKE CITY, UT – APRIL 26: In this photo illustration a one dose bottle of measles, mumps and rubella virus vaccine, made by MERCK, is held up at the Salt Lake County Health Department on April 26, 2019 in Salt Lake City, Utah. (Photo Illustration by George Frey/Getty Images)

WASHINGTON — As part of its push to eliminate or greatly restrict federal funds involved with fetal-tissue research, the Trump administration canceled a medical research contract with the University of California, where fetal cells were infused with mouse immune systems.

The June 5 decision [9] from the Department of Health and Human Services is the latest example of the administration pledging to find “adequate alternatives” to research that has depended on fetal tissue and to make sure “efforts to develop such alternatives are funded and accelerated.”

“Promoting the dignity of human life from conception to natural death is one of the very top priorities of President Trump’s administration,” the decision  stated.

The announcement may give hope for Catholics that the time has come to push for the development or distribution of ethical vaccines whose source cells did not involve the taking of a human life by abortion.

Most vaccines are derived from ethically derived sources, such as animal or insect cell lines, and not from unborn children whose tissues were harvested following elective abortions. But a number of vaccines Americans rely on today, such as the Mumps, Measles, Rubella (MMR) vaccine, are derived from cell lines whose origins go back to the tissues of unborn children aborted decades ago.

In Kentucky, Jerome Kunkel [10], a Catholic high-school senior at Our Lady of the Sacred Heart/Assumption Academy in Walton, refused a chicken pox vaccine for this reason, citing his objections to abortion.

He sued the Northern Kentucky Health Department after it barred him from going to school for several months due to concerns over possible contagion from his lack of a chicken pox vaccination. Kunkel came down with chicken pox in May and since returned to class.

The Catholic Church opposes using fetal tissue derived from abortion for medical research and vaccine development. However, the Church also recognizes that in the absence of ethically sourced alternatives, parents and individuals may use those vaccines until an alternative is available, explained Jozef Zalot, staff ethicist at the Philadelphia-based National Catholic Bioethics Center.

A 2005 instruction from the Pontifical Academy for Life stated [11] that people who have no access to ethically sourced vaccines would be “right to abstain from using these vaccines if it can be done without causing children, and indirectly the population as a whole, to undergo significant risks to their health.”

The Vatican’s Pontifical Academy for Life explained that there is “proportional reason” to use such vaccines “on a temporary basis” to avoid considerable dangers to public health, particularly in the case of diseases such as rubella (German measles), which is fatal to unborn children. It said “the burden of this important battle cannot and must not fall on innocent children and on the health situation of the population — especially with regard to pregnant women,” but this unjust situation of forcing parents or individuals to violate their consciences through passive material cooperation to avoid worse evils “must be eliminated as soon as possible” by production of ethically derived alternatives.

Zalot explained that while Catholics have a moral responsibility to communicate their demand for ethical alternatives to vaccines derived from fetal tissue, the burden of responsibility increases for those in positions of power and authority. He pointed to leaders of Catholic health care systems that have contracts for hundreds of millions of dollars with pharmaceutical companies that provide such vaccines as one example.

Catholic health care systems, Zalot said, “have some clout, and because of that, I would say their moral responsibility to call for ethically sourced vaccines is greater than [that of] your typical John Q. Public.”

Dr. Barbara Golder, the editor in chief of The Linacre Quarterly and a member of the Catholic Medical Association, said that because the vaccine issue is one of moral law and not spiritual matters, Catholics need to make sure the discussion on ethical alternatives to vaccines derived from fetal tissue does not get confined to the Catholic or religious world, but is part of the general conversation.

However, she said Catholics should arm their advocacy with awareness about the alternatives in existence and make sure their allies in the pro-life movement are informed about them. Golder said there is also more at stake than the ethical source of the vaccine.

“It is unreasonable to put a patient in the position of choosing to violate his conscience for an essential medical procedure, in this case, vaccination,” Golder said.

Golder, however, cautioned that refusing to take vaccines at all is “counterproductive.”

“The rising incidence of vaccine refusal is leading in some places to an elimination of exemptions altogether, which undermines the argument for religious conscience in general,” she said.

Conversations about ethical alternatives could build to grassroots-level engagement that could “involve medical societies, large practices or other community groups.”

She said Catholics — and other people of goodwill — should be informed about ethical vaccines and “ask for them by name when the time comes” to one’s physician, pharmacist or health department. She recommended rewarding practices that provide ethical vaccines and protesting when “alternative vaccines are not available because the hospital, practice or insurance company has elected not to cover them.”

Golder suggested that Catholic physicians, organizations and institutions should become intentional about getting behind this effort. Universities might also have the heft to raise funds to support ethical vaccine development.

But she said it is important for Catholics to speak up and organize to generate “a growing sense of demand that can’t be ignored” so lawmakers and policymakers can act on the development of ethical alternatives.

“We have a responsive administration just now — it makes sense to take advantage of it,” she said.

Some in Congress have echoed similar sentiments in welcoming the Trump administration’s HHS decision.

“Ethical scientific practices are paramount to discovery, but they should never include the harvesting of developing baby hearts, eyes, livers and brains following elective abortions,” U.S. Rep. Vicky Hartzler, R-Mo., said in a statement.

The Trump administration’s decision to close the federal spigots on fetal-tissue research could help vaccine development stay focused on vaccines that are not only ethically sourced, but far more effective in the long run.

Tara Sander Lee, a senior fellow and director of life sciences at the Washington-based Charlotte Lozier Institute, told the Register that the new Ebola [12] and shingles vaccines, engineered with Vero monkey cell line and engineered hamster cells respectively, have proven more effective than their fetal-tissue based alternatives. Lee said the new Ebola vaccine proved to be 97% effective, and Shingrex (the new vaccine for shingles) showed “greater than 90% effectiveness.”

Lee said scientific research is demonstrating that the new vaccines from animal cells are just as effective, if not more so, than the ones derived from fetal cells. She noted that none of the vaccines currently in use today by Americans are affected by the decision to close off fetal-tissue research.

“The vast majority of vaccines are already being produced with ethical alternatives [to fetal tissue],” she said, such as monkey kidneys, insect cells or Chinese hamster cells.

Scientists in the past have used fetal cell lines because fetal cells replicate much faster than adult tissues when it comes to cultivating vaccines. But Lee said they were not the exclusive source — vaccines such as for polio now use animal cells.

Lee also pointed out that there are more ethical alternatives that have been developed, but they are not available in the U.S.

“There is an ethical version for MMR [Measles, Mumps and Rubella], but it is only available in Japan,” she said. Japan’s rubella vaccine is derived from quail egg and rabbit cell lines.

However, she said companies like Merck are reluctant to reformulate vaccines or get the Food and Drug Administration to approve distribution of ethical vaccines when they see no financial incentive to do so.

Stopping this practice of fetal tissue-based research now, with renewed pressure from the administration, Lee said, would encourage scientists to focus their research on non-fetal-tissue-based alternatives that make more effective vaccines in the long run.

“There’s no need for them to continue to use these fetal cell lines from abortions that took place back in the ’60s. There’s just no need,” she said.

“The newer, most advanced way is using ethical vaccines.”