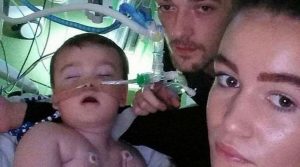 [9]LIVERPOOL, England (ChurchMilitant.com [10]) – Troubling revelations are emerging about the last hours of Alfie Evans, the U.K. toddler who died after a protracted legal battle with Alder Hey Hospital.

According to Benedetta Frigerio, writing in Italian journal La Nuova Bussola Quotidiana, Alfie — suffering from an undiagnosed brain condition — was showing promising vital signs only two hours before death, but took a downturn after a cocktail of unknown drugs was administered by a hospital nurse.

Two hours before dying, the oxygen saturation was about 98 and Alfie’s [heart]beats were about 160, so much so that Thomas was convinced that they would let him go home soon (as the hospital administration told him on Friday afternoon). Before dying, while Thomas had gone out for a moment, leaving Kate half-awake and another family member in the room, a nurse entered and explained that he would give the baby four drugs (no one knows what) to treat him. After about 30 minutes the saturation dropped to 15. Two hours later Alfie was dead.

Although some have contradicted [11] the account, Frigerio insists the account is accurate. She also claims the ventilator, on which Alfie had been relying for many months, was abruptly removed, causing major stress to his body.

“Being that his lungs were used to being dilated mechanically, the doctors would have to ‘wean him’ so as not to provoke his immediate death,” Frigerio wrote, “which, however, did not happen … .”

She reports that he immediately contracted “a lung infection” after the breathing tubes were removed, prompting his father Thomas to plead for antibiotics — denied by Alder Hey.

The account details the father’s frantic attempts to get oxygen and water to his child, repeatedly denied by the hospital until Thomas pointed out that the end-of-life plan approved by the courts nowhere included an order to deprive Alfie of oxygen or nutrition.

Alfie went without oxygen or water for nine hours before the hospital relented, and for a full 36 hours before being given milk — an exceptionally long time for a 23-month-old, whose bodily needs require food every 3–4 hours.

“Yes, Alfie was left without food for 36 hours, a very long time for such a small child, whose heart had already sustained a huge effort after the violent removal of ventilation without weaning,” Frigerio wrote.

Bruno Dalla Dallapiccola, scientific director of the Vatican-run Bambino Gesù Hospital, which was working to get Alfie transferred to their care, commented at the time that “little Alfie will not be able to last long without the supply of nutritional substances through a drip. Without the nutritional intake, in fact, survival can vary from a few hours to a few days.”

And Italian geneticist Angelo Selicorni remarked two days after Alfie’s breathing tubes were removed, “Detached from the machines the child has [resisted] for hours with no intention of dying,” which “raises some doubts about the ‘terminality’ of his state.”

Other reports reveal Alfie’s undiagnosed brain condition did not appear until after he was admitted to Alder Hey Hospital. David Catron writes in The American Spectator [12] that the toddler’s “initial diagnosis involved a fairly common condition: ‘viral bronchiolitis and a possible prolonged febrile convulsion.’ The still-undiagnosed brain disease that allegedly killed Alfie didn’t appear until after he entered this dangerous hospital.”

Viral bronchiolitis [13] is a common ailment among babies and toddlers, and involves cold-like symptoms, including stuffy nose and congestion, coughing and a fever. With basic care most children recover quickly.

She ends with a final lament:

This is what Alfie’s martyrdom did, as well as converting many hearts: It forced us to unite against a monster, to look at the brutality of a eugenics system disguised as democracy. A system with unlimited power over the person and considered a civil religion by English politics and justice. A power that crushes so many other fragile lives and spreads a utilitarian mentality that one must begin to fight if one does not want to do the same end.