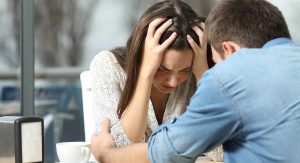 [9]Abortion advocates call abortion “reproductive freedom” but instead of finding freedom, women who experience abortion can find themselves weighed down by mental health disorders, including depression. Research consistently points to the negative effects of abortion on women’s mental health — and personal stories from women corroborate these studies.

A study published in July of 2016 [10] — using data was collected from 8,005 women in the United States who were followed over a period of 13 years — associated abortion with an increased risk [11] of mental health disorders and substance abuse in late adolescence and early adulthood. Dr. Donald Sullins analyzed the data and found that “abortion was consistently associated with increased risk of mental health disorders. Overall risk was elevated 45%.” This research confirmed 2005 study [12] findings from Norway which showed that compared to women who have suffered miscarriages, women who have had abortions have “significantly higher” Hospital Anxiety and Depression Scale anxiety scores even five years later. In addition, a 2008 New Zealand survey [13] of over 500 women found that women who had an abortion had a 30% increased risk of developing mental health disorders such as anxiety and depression.

Women who have suffered the effects of abortion trauma often suffer in silence, shamed by the abortion industry into believing abortion is a “right” they should applaud. However, there are women who have come forward with their heartbreaking stories showing that abortion did not empower them.

On the Netflix dating show “Love is Blind,” contestant Amber Pike revealed [16] the trauma she suffered from abortion. “After the fact, [my boyfriend and I] were just talking. I’m telling him, like, I’m trying to explain what I’m going through, like, I”m having a really hard time getting out of bed in the morning. I don’t eat. I’m not really sleeping. […] I can’t survive that again. It would destroy me.”

In a post-show interview with ET, Pike discussed her financial debt. “I had not been paying on my student loans, as previously mentioned. After my abortion, I had fallen into depression and dropped out of school. My mental health was more of a priority for me and I was slowly building my life together when I got the opportunity to be on this show.”

Still, Pike received criticism for speaking about abortion in a negative light.

TLC band member Chilli revealed [17] in 2010 that her past abortion still weighs on her. “It messed me up,” she said during an interview. “I don’t know; It just, it broke my spirit. […] I feel like I became kind of like not my strong self anymore. […] And I would break down and I would just cry because I wasn’t a mommy. I cried almost every day for almost nine years and then I was caught up, I had to have a baby.”

Allison Duhon shared her abortion experience [18], saying it was both physically and emotionally painful. “I remember going numb for months after my abortion,” she wrote. “I remember the trust issues I had with everyone. I remember feeling extremely overprotective of my daughter because I thought I didn’t deserve a healthy child. I remember the pain when I found out my son had autism and thoughts of it being a punishment.” She said she felt “unforgivable.”

“I still cry for my baby,” she explained. “[…] I have to live forever with the excruciating reality that I ended my baby’s life. All my ‘right’ did was cause me a lifetime of pain. There was no empowerment in that.”

Another woman shared her experience [19] with abortion after becoming pregnant from rape. On the website AbortionChangesYou.com, she wrote, “There are no words that can explain this depressing, and anxiety feeling I feel. Deep inside it kills me everyday knowing what I did was very stupid. I don’t think I could ever forgive myself. Not only does it haunt me but it’s very traumatizing knowing I did it. Having this happen not only did it affect my feelings, but it affected my life in so many ways…. I do regret what I did. If I could only go back to the day I would have never done it.”

In a horrific story [20] out of Belgium, Julie Lambotte aborted her daughter because of a Down syndrome diagnosis and afterward suffered such grief that she killed two of her three born children. She drowned her 22-month-old daughter and stabbed her nine-year-old and seven-year-old children. The nine-year-old survived. Lambotte told authorities she did it because she “missed her little girl.”

The denial of the abortion industry

Abortion is a traumatic experience for many women, and also for many men, who have said [23] that abortion “left deep scars” and that they felt “an extra weight pulling [them] down.” Another man admitted [24] that after his girlfriend’s abortion, “I didn’t know how I was going to survive; I wasn’t going to jump off a bridge, but I probably would have drank myself to death. I’ve thought about what happened every day for the last 32 years.”