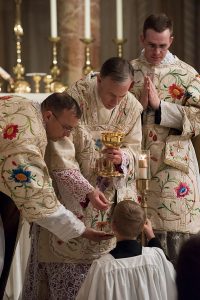 WASHINGTON — The extraordinary form of the Mass is drawing young people with its sense of reverence and transcendence, Portland Archbishop Alexander Sample said during an April 28 homily in Washington, D.C.

“It has clearly been demonstrated that young persons, too, have discovered this liturgical form, felt its attraction, and found it a form of encounter with the mystery of the most holy Eucharist particularly suited to them,” Archbishop Sample said, quoting a 2007 letter from Pope Benedict XVI to the world’s bishops.

The archbishop made the remarks during his homily at the Basilica of the National Shrine of the Immaculate Conception here, where he was celebrating a pontifical high Mass to commemorate the 10th anniversary of Pope Benedict’s XVIs apostolic letter “Summorum Pontificum.” Archbishop Sample thanked Pope Benedict in his homily for allowing the older form of the Latin Mass to flourish in the new millennium.

“Let us thank the Lord for Pope Benedict’s gift to us — the greater celebration and availability of the usus antiquior [older use] of our common heritage in the Roman rite,” said the archbishop.

Close to 3,000 worshippers attended the Mass, including pilgrims from all over the country. It was broadcast worldwide on EWTN. Young people were in attendance, including the traditional young adult group Juventutem. The archbishop called the young people present a promising sign for the church in modern times.

“I have met a good number of you personally,” Archbishop Sample said to the assembled young adults. “You are a sign — a great sign — of encouragement and hope for the church tossed about these days on the troubled waters of secularism and relativism. As they say, you ‘get it.’”

Young people’s attraction should make church leaders question what is drawing them to the older form of the Mass, the archbishop said. Some priests and bishops, he explained, wonder what it is about the extraordinary form that attracts young people who didn’t grow up with it.

“That is exactly the question you should be asking,” Archbishop Sample said. “What is it that this form of the Roman rite provides for them that their own experience growing up with the ordinary form did not provide?”

The archbishop made it clear that he was not questioning the legitimacy or benefits of the reforms called for by the Second Vatican Council, but rather that their implementations had not always “borne good fruit.”

“Certainly, through liturgical abuses, other aberrations or simply a poor ars celebrandi [art of celebration], the ordinary form of the Roman rite has too often been disfigured and has been experienced as a rupture with our liturgical past,” he said.

Still, he said, quoting Pope Benedict, “There is no contradiction between the two editions of the Roman Missal.”

Both the extraordinary and ordinary forms serve to enrich each other, said Archbishop Sample. “There must be further liturgical growth and development along the lines of a hermeneutic of continuity with the past and any experience of rupture must come to an end,” he said.

After the Mass, Archbishop Sample spent time with many of the attendees, interacting and taking photos with them.

John Mayer, a member of St. Mary Parish in Mount Angel, made the six-hour drive from Franciscan University of Steubenville in Ohio, where he is studying, to attend the Mass and was able to meet with the archbishop. Being there, he said, reminded him that the sacred liturgy is something that can unify Catholics from all walks of life.

“Tradition in the liturgy unites people of all ages,” he said. “It was amazing to see so many people flock to Our Lady’s national shrine in our nation’s capital for this Mass, tied together by this ancient practice of the Roman rite.”