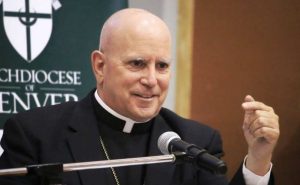 DENVER, Colorado, February 5, 2018 (LifeSiteNews [8]) – As the 50th anniversary of Humanae Vitae approaches, the “liberating truth” of Church teaching on human sexuality must be proclaimed to the “increasingly confused” world, Archbishop Samuel Aquila of Denver wrote in a new pastoral letter.

In his pastoral letter, titled The Splendor of Love [9], Aquila wrote that although contraception has wrecked much of the culture and family life, not all is lost and there are great opportunities for people in every state of life to live and share Catholic teaching.

Catholics must have a “strong commitment” to defend authentic love, Aquila said, noting that Fatima visionary Sister Lucia said the final battle between God and Satan will be over “marriage and family”:

Indeed, Sr. Lucia, one of the visionaries from Our Lady’s apparition at Fatima, related that a “decisive battle between the kingdom of Christ and Satan will be over marriage and the family.” The family is the foundation of society, and when it is undermined, society itself is threatened with collapse. Therefore, it is crucial to reaffirm our commitment to the truth, goodness, and beauty of Christ’s teaching on marriage and sexuality.

Priests should “address” the 50th anniversary of Humanae Vitae in their parishes, wrote Aquila, urging them, “do not be afraid to proclaim the truth of God’s plan for human love with gentle clarity and charity.”

“Pope Saint John Paul II has deepened our understanding of the great gift of human sexuality, which requires nothing less from us than a complete gift of self,” Aquila explained. “In his reflections on the theology of the body, he teaches us that ‘The human body includes right from the beginning … the capacity of expressing love, that love in which the person becomes a gift – and by means of this gift – fulfills the meaning of his being and existence.’”

Aquila cited as another positive development Pope Emeritus Benedict XVI’s writings on marriage and how the love between husband and wife is a reflection of the love between God and His Church and the emphasis of Pope Francis on “the importance of fostering a culture of encounter within the family, so that the deeply social character of marriage is supported and spreads to society at large.”

Aquila cited chapters 3, 4, and 5 of the current pontiff’s controversial exhortation Amoris Laetitia. One of the portions of the document he quoted referenced St. John Paul II’s Familiaris Consortio.

“Unfortunately, Blessed Paul VI’s prophecies” about the effects of contraception “have all come true,” the archbishop wrote. He explained:

While advocates of contraception predicted that divorce rates and abortions would decrease with its use, they skyrocketed. Women have also greatly suffered from objectification, which is found in advertising and movies, but also takes on more extreme forms like pornography and sex trafficking. The Holy Father’s expectation that governments would impose contraception on people most recently came to fruition in the Obama administration’s Health and Human Services contraception mandate, but has also appeared in American and European government programs that provide contraception in developing countries.

While the 1968 reception of Humanae Vitae was mixed, the fulfillment of Blessed Paul VI’s prophetic wisdom is undeniable and points to the truth of the teaching contained in Humanae Vitae. Furthermore, those communities of faith which have gone the way of the world in their teaching on human sexuality have not filled their churches but only emptied them. As Jesus made clear in the Gospel, apart from him and his life-giving teachings, we cannot bear fruit.

Other “unique challenges” have arisen, “of which Blessed Paul VI could not have even dreamed,” Aquila lamented. “Rejecting the true nature of the sexual act has not led to increased happiness and fulfillment but to a distortion of the relationship between men and women. The effects of the sexual revolution have devastated our culture: large numbers of abortions, a sharp rise in STDs, divorce rates hovering near 50 percent, birth rates falling below replacement level, and a decline in people getting married.”

The prevalence of pornography has cheapened sex and led to “a decline in a rightly ordered sex drive, with a loss of libido and even a movement towards intercourse with robots, as reported in the media.”

Aquila observed that artificial contraception has had a negative impact on the planet.

Catholic Church has the ‘antidote’ for today’s sexual brokenness

Citing the first book of the Bible, Genesis, Aquila told his flock that God created humans “male and female.”

“Our dignity comes from being made in his image and likeness,” he wrote. “God, the source of all life and love, planned from the beginning that the love between a man and a woman should image his own love and bring forth new life in the context of a family. The blessing of children was given to man and woman before their fall from grace, and it was not lost because of their sin.”

Family allows us a “glimpse” of “the joy of eternity” while on Earth. The family shows the reality of the two sexes and created in God’s image and loves new life into existence, Aquila explained, quoting homilies from Pope Benedict and Pope Francis.

Humanae Vitae and Theology of the Body are “vitally important teachings” that “convey these truths in a way that is both bold and pastorally aware of the challenges men and women encounter in the modern world.”

Family allows us a “glimpse” of “the joy of eternity” while on Earth.

They offer the “antidote” to “the widespread false ideas of freedom and the purpose of sexuality that so many are suffering from today.”

He emphasized the importance of husbands and wives loving each other unconditionally. Marriage is “exclusive until death, reflecting God’s fidelity.”

Within the last couple years, I met a couple who was living together and had conceived a child but also wanted to get married in the Church. Their situation was further complicated by the fact that the man had been married previously and had children from those marriages. The woman wanted to regularize their situation with the Church. He began the annulment process, their child was born, and they went through marriage preparation classes and NFP classes. The couple was so convicted by what they learned in NFP classes that they decided they should live as brother and sister for several months until I happily officiated their sacrament of marriage. Their love was profoundly deepened by encountering Jesus and his plan for sexuality and the family. Not only were they transformed, but their extended family and their friends heard about their experience too.

Children are “esteemed as marriage’s greatest gift,” not a burden and infertile couples can still have fruitful love “when they seek to serve the community around them.”

“Through marriage, the spouses are joined in their flesh, but also in their affections and spirit (fully human), in all the dimensions of their life (total), in their past and future (faithful and exclusive), and in the possibility of receiving the gift of a new life (fruitful),” the archbishop wrote. “Genuine married love has these four features.”

“Because God designed sex to have both a unitive and procreative dimension, man cannot separate them without causing real damage,” wrote Aquila. “Sex, too, is a part of ‘what God has joined together.’ It is a blessing! Like the wings of an eagle, these two meanings can only subsist together. If we try to separate them, we will lose both.”

He then outlined how the attempted sterilization of sex has led to procreation without sex:

That contraception attacks the procreative aspect of sex is readily apparent from its design. What is less apparent, though, is how it harms the unitive dimension of sex.

Saint John Paul II observed that our bodies were designed by God so that they speak a language. In the one-flesh union of husband and wife, that language communicates the total gift of self, including their fertility, without any limits or restrictions. But contraception introduces a falsehood into the language of the body. While the spouses indicate with their bodies that they are totally giving themselves, contracepted sex withholds one’s fertility and the chance to become a potential parent. Blessed Paul VI did not reject contraception because it is artificial but because it damages the conjugal act of the spouses, which lies at the heart of their intimacy and is the sanctuary of life. This makes contraceptive acts “repugnant to the nature of man and of woman” and contrary to God’s plan, as Humanae Vitae states.

Blessed Paul VI’s teaching also helps us understand the link between contraception and in vitro fertilization, that is, between sex without babies and producing babies without sex. While contraception involves removing the procreative dimension, in vitro fertilization jettisons the unitive dimension of sexual intimacy. Instead of conceiving a child in an act of love, the couple produces a child in a lab, which violates the child’s inherent dignity.

The archbishop ended his pastoral letter with a call to action, imploring Catholics to share the beauty of the Church’s teaching.

Rather than being “a burden and a source of repression,” it helps people “overcome the many burdens and wounds that follow from our broken families and sexuality.”

“Our bodies were designed by God so that they speak a language.”

“Every Catholic has a mission to live and share the good news of God’s plan for human sexuality,” he declared. “This requires courage to stand against the prevailing cultural winds, but Jesus calls us to nothing less. Only living in the truth will give us true freedom, true love, and true happiness.”

Evangelizing the culture about the wisdom and truth of the Church’s teachings includes taking “a stand against the gender ideology that is sweeping through our country. Pointing people to the teaching of Jesus is not confrontational, but an act of love, helping them to find true happiness.”

Aquila offered suggestions for people in various states of life and professions to witness to the truth about human sexuality.

As children’s “primary educators,” parents have a special role in this regard, he said. They should guide their children to avoid pornography and casual sex and be prepared to equip them to “respond when dangerous situations present themselves.”

“Unfortunately, and sadly, our children are exposed at a young age to many confusing distortions of human sexuality,” he noted.

The archbishop said parents have told him about their four-year-olds coming “home from public schools where teachers have told them that they can be whatever gender they want and that people of the same sex can marry each other. Innocence is harmed and confusion is instilled by such teachings.”

So, “having conversations early, without destroying their innocence, will be important so that children know how to respond when dangerous situations present themselves,” he wrote.

Aquila offered inspiration for doctors and nurses, lawyers and politicians, those in media, teachers and catechists, NFP instructors, and engaged couples to continue living the Church’s teachings on sexuality.

“Jesus is the source of true love” and “the one who heals us of our sexual wounds,” he concluded. “Humanae Vitae serves as a great light in the midst of a dark and confused world when it comes to human sexual intimacy. We ask for the prayers of Blessed Paul VI as we look to his guidance for handing on and living according to the teachings of Christ in the world today.”