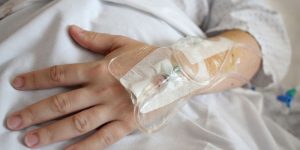 A neuroscientist has found that at least 20 percent of people thought to be in a vegetative state are completely aware of what’s happening around them and to them, but they are unable to respond or move. This means that people thought to be in comas or a ‘vegetative state’ are suffering horrible abuses – being starved and murdered like Terri Schiavo [8] – all while being completely aware of what’s being done to them.

Dr. Adrian Owen, the author of Into the Gray Zone, is a neuroscientist who has been studying how people who are thought to be unaware — often because they cannot answer commands such as “squeeze my hand” — are actually very aware. He asked the question, “could somebody command follow with their brain?”

By scanning the brains of conscious individuals and asking them yes or no questions, he took note of the areas of their brains that were activated with blood flow. Rather than answer yes or no, these healthy individuals were asked to think of playing a game of tennis if the answer to the question was yes and to think of moving through their own home if the answer was no. Each of those thoughts uses a different part of the brain and doctors could watch which part became activated when asking the questions.

Then Owen tried this with hundreds of people thought to be unresponsive and vegetative. What he found was astonishing. An astounding one in five people who were unable to physically respond to command prompts in the past were able to respond to them with their brains, proving that they were not unresponsive or unaware as previously believed.

“What we’re doing is returning the ability to communicate to some patients who seem to have lost that forever,” said Owen. “[…] I can still remember exactly what it felt like the first time we saw a patient that we thought was in a vegetative state activate their brain in the scanner. The patient’s name was Kate. Nobody would have predicted that we would have seen brain activity in response to asking a patient to do something and when we first saw it it was absolutely astonishing. Before we made that discovery, nobody bothered to look at any of these patients.”

What he discovered will change the way doctors and family members treat people who are living like Terri Schiavo did. Rather than pass them off as people who are unable to live or unworthy of living and assuming these people would rather die and then starving them to death, doctors will actually be able to ask people how they feel, if they are in pain, and what they want for their lives. They will no longer be locked inside their minds, forced to watch as well-meaning doctors and family members make life or death decisions for them. They will no longer have to sit in pain unable to express it. And the lives of people around the world who are currently written off as “vegetative” will be opened to a whole new way of living. Because that’s what they have always been – living human beings worthy of the best that medical care and love can give them.