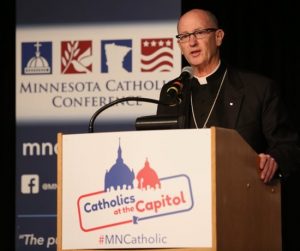 Bishop James Conley of Lincoln, Nebraska has said there is “uncertainty and confusion” within the Church over moral teaching, including “at a very high level” of the hierarchy.

While praising Pope Francis, the bishop also discussed the role of the papacy, saying that even popes “cannot overturn what has been infallibly taught”.

Bishop Conley’s remarks came in an interview with Professor Robert George of Princeton University, which appears as a chapter in a new book [10], Mind, Heart, and Soul: Intellectuals and the Path to Rome.

The bishop was asked about the divisions within the Church. He replied that “there seem to be some voices within the Church, some at a very high level, that are calling into question some fundamental truths about the human person”. Bishop Conley, who chairs the US bishops’ Subcommittee for the Promotion and Defense of Marriage, said he was especially referring to truths about marriage and sexuality.

“These truths have long been taught by the Church,” Bishop Conley told Professor George, “and were strongly reaffirmed by Pope John Paul and Pope Benedict. Questions concerning the nature and function of conscience, sin and the moral act, intrinsic evil, and the natural law.”

Bishop Conley said that “some voices” were “very disturbing. And some of them are very important voices – theologians and even bishops, archbishops, and cardinals”. But despite these “deepening divisions”, the bishop said he was not “shaken”. “I have confidence that the Holy Spirit will eventually sort it all out and not let the Church go off the rails.”

Bishop Conley said he thought Pope Francis upheld the Church’s teachings. The bishop also considered “what the faithful Catholic would be bound by conscience to do if, God forbid, his or her properly formed conscience were to come into conflict with something a pope says. It could be Pope Francis or any pope.”

Under such circumstances, the bishop argued, it would be necessary to “go with the sensus fidelium” – “the belief of the Church through the ages, yesterday, today, and forever”. Bishop Conley distinguished between the sensus fidelium – “the Church’s firm, constant, and true teaching” – and modern dissent about, for instance, contraception.

Bishop Conley said that there were “rare” times in history when a pope has said “something that contradicts or is logically inconsistent with the firm and constant teaching of the Church on a matter of faith or morals”. If this happens, he said, it is important to remember that “the pope cannot overturn what has been infallibly taught, whether by the papal magisterium itself or by an ecumenical council or by the ordinary universal magisterium.” Popes are “not dictators”, he said, and “the faith of the Church does not lie in a pope”.

Bishop Conley said that Blessed John Henry Newman could help Catholics to “understand the office of Peter, especially in the present pontificate”. While Newman “had a very healthy respect, obedience, and admiration for the papacy”, he also “knew that not every utterance that came out of a pope’s mouth is necessarily authentic Christian doctrine.” Bishop Conley said this awareness made Newman unpopular with powerful figures, and may have prevented Newman from being made a bishop.