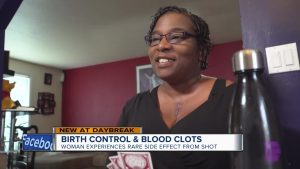 [7](Ivanhoe Newswire) – When people get new prescriptions, they very often don’t look at the list of side effects. One woman in Seattle started taking the birth control shot, Depo-Provera not knowing all the side effects. She became one of the less-than-one-percent who developed life-changing, life-threatening blood clots in her lungs.

Marilyn Wightman thought losing weight would ease her sudden mysterious shortness of breath in 2009. It didn’t. Then, she fainted on the stairs.

“The first question my doctor asked was, ‘Are you taking Depo-Provera?’ I’m like, ‘Yeah.’ And he’s like, ‘Oh, that’s it,’” said Wightman.

He put her on blood thinners, but she was in and out of the hospital until last year when her doctors told her that without surgery, she had a ten percent chance of living five years.

Michael Mulligan, MD, Cardiothoracic Surgery, UW Medicine shared, “In a very small fraction, however, patients develop a response to the clot, where the clot breaks down, but then you start to develop scar-like plugs that obstruct the vessels and make it harder and harder for the blood to be pumped through the lungs.”

In a six-hour procedure that left a scar, Dr. Mulligan removed 15 clots mixed with scar tissue from Marilyn’s lungs. First, he had to raise her oxygen level, lower her temperature and metabolism, stop her heart and drain her blood.

“You work very quickly to expediently tease out these clots that are multi-branched without puncturing the vessel, which is wafer thin,” continued Dr. Mulligan.

Marilyn says she wouldn’t have taken Depo-Provera if her doctor had told her about the blood clot risk.

Dr. Mulligan says as long as Marilyn stays on her blood thinners, her clots should not return. It shouldn’t be long until she has her normal life back again.