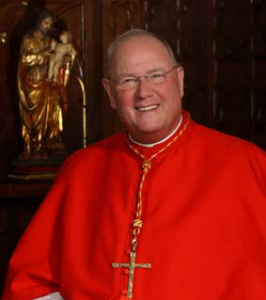 “Not to us, Lord, not to us, but to your name be the glory!” I gratefully accept this prestigious Wilberforce Award, if you agree to certain conditions, okay?
We New Yorkers are tough negotiators, as you know, so, listen carefully to these conditions: Ready?
Condition #1: that receiving this award be an occasion, like every event in life should be, for me to praise God, from whom all blessings flow, and His Son, our Lord and Savior, Jesus Christ, whose Resurrection we radiantly confess this paschaltide. “Not to us, Lord, not to us, but to your name be the glory!”
So far so good with the conditions . . . ?
Condition #2: that this be awarded not to one Timothy Dolan, but to the Catholic bishops of the United States. The gracious people who choose the recipient of this award have already noted that, through this thoughtful event, they wish to affirm “advocacy for life, marriage, the rights of conscience, and religious freedom.” Those principles, of course, are hardly mine alone, but have been a constant platform of my brother bishops. So, I’ll accept this honor, on condition #2, if I can do so on behalf of all the bishops in the United States.
Condition #3 . . . I told you I drive a hard bargain . . . is that I can use this occasion to extol the extraordinarily warm friendship and effective alliance that now characterizes the Catholic Church and Evangelicals in this beloved country we hail as our earthly home.
No way could a cardinal of the holy Roman Church have received such an honor from such a revered group, made up mostly of Evangelical Christians, in the past! No way! Today, though, thank God, Evangelicals and Catholics are together, co-workers in the vineyard, especially in bringing the light of the Gospel to a culture often in the dark on noble issues such as the defense of innocent, vulnerable life; the protection of marriage as revealed in God’s Word, instilled in reason and Natural Law, antecedent to any Church or government; and the advocacy of our first and most cherished freedom.
Actually, I confess a sin to you: plagiarism! We Catholics have stolen your dynamic emphasis on evangelicalism! Blessed John Paul II, Benedict XVI, and our new Holy Father have insisted that a new evangelization is the definition of today’s Catholicism, and George Weigel has posited that only a rediscovered evangelical Catholicism, the title of his new book, can bring about the renewal of the Church longed for by the Second Vatican Council.
So, condition #3 is that you’ll shout your Amen to this providential new bond between Catholics and Evangelicals, so evident in our company this enjoyable evening.
Last condition: that you’ll join me in a grateful prayer for two giants, now, as we Irish say, “gone to the Lord,” whose presence is almost tangible this morning: Chuck Colson and Richard Neuhaus:
Requiescant in pace!
Alright, these are my conditions . . . take ‘em or leave ‘me.
You accept them?
Good! Then I gratefully accept the 2013 William Wilberforce Award!

The human project is all about babies!