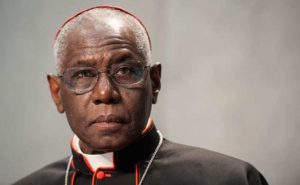 NEW YORK, April 24, 2017 (LifeSiteNews [8]) — Cardinal Robert Sarah warned that the Church’s unity is being threatened by influential leaders within the Church who “insist” that national churches have the “capacity to decide for themselves” on doctrinal and moral matters.

“Without a common faith, the Church is threatened by confusion and then, progressively, she can slide into dispersion and schism,” he said.

“Today there is a grave risk of the fragmentation of the Church, of breaking up the Mystical Body of Christ by insisting on the national identities of the Churches and thus on their capacity to decide for themselves, above all in the so-crucial domain of doctrine and morals,” he added.

Catholics profess every Sunday in the Nicene Creed that the Church is “one, holy, Catholic, and Apostolic.” These are often called the four “marks” of the one true Church.

Sarah, who comes from Guinea, made the comments when asked in an April 18 interview with the charitable organization Aid to the Church in Need about the relationship between the “African Church” and the “Universal Church.”

The Cardinal, who is the Prefect of the Congregation for Divine Worship, said that, strictly speaking, there is no such reality as the “African Church.”

“The Universal Church is not a sort of federation of local churches,” he said. “The Universal Church is symbolized and represented by the Church of Rome, with the Pope at its head, the successor of Saint Peter and the head of the apostolic college; hence it is she who has given birth to all the local churches and she who sustains them in the unity of faith and love.”

Sarah’s remarks will be seen by some as opposing a push by Pope Francis to give bishops’ conferences in individual countries more power, even to settle doctrinal and moral disputes.

In his 2013 Exhortation Evangelii Gaudium, Pope Francis called [9] for a “conversion of the papacy” that would help him “exercise” the Petrine ministry. He criticized in the same document “excessive centralization” of power in the office of Peter, suggesting that bishops’ conferences should be empowered with “genuine doctrinal authority.”

Francis also wrote about a decentralized Church in his 2016 Exhortation Amoris Laetitia. He wrote: “I would make it clear that not all discussions of doctrinal, moral or pastoral issues need to be settled by interventions of the magisterium…Each country or region, moreover, can seek solutions better suited to its culture and sensitive to its traditions and local needs.”

According to Archbishop Stanislaw Gadecki, president of the Polish bishops’ conference, the Pope told Polish bishops last year [10] that a decentralized Church would be able to interpret papal encyclicals and to solve contentious issues, such as giving Communion to civilly divorced and remarried Catholics.

In the interview with Aid to the Church in Need, Cardinal Sarah said that the Church will grow throughout the world only if it is united by “our common faith and our fidelity to Christ and his Gospel, in union with the Pope.”

“As Pope Benedict XVI tells us: ‘It is clear that a Church does not grow by becoming individualised, by separating on a national level, by closing herself off within a specific cultural context, by giving herself an entirely cultural or national scope; instead the Church needs to have unity of faith, unity of doctrine, unity of moral teaching. She needs the primacy of the Pope, and his mission to confirm the faith of his brethren,’” he said.

Later in the interview, Sarah said the Church would be “gravely mistaken” to think that social justice issues such as combatting poverty and helping migrants were her real mission.

“The Church is gravely mistaken as to the nature of the real crisis if she thinks that her essential mission is to offer solutions to all the political problems relating to justice, peace, poverty, the reception of migrants, etc. while neglecting evangelisation,” he said.

The Cardinal said that while the Church “cannot disassociate herself from the human problems,” she will ultimately “fail in her mission” if she forgets her real purpose. Sarah then quoted Yahya Pallavicini, an Italian and former Catholic who converted to Islam, to drive home his point: “If the Church, with the obsession she has today with the values of justice, social rights and the struggle against poverty, ends up as a result by forgetting her contemplative soul, she will fail in her mission and she will be abandoned by a great many of her faithful, owing to the fact that they will no longer recognize in her what constitutes her specific mission.”