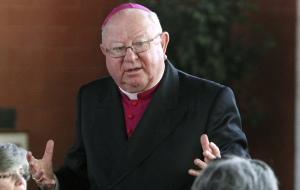 Less than a week before Americans cast their votes for president, Catholic bishops are urging their congregants to educate themselves about the candidates’ positions on abortion.

The next president could make a huge impact on the future of abortion in the U.S. through his or her nominees to the U.S. Supreme Court and other policies. And Democratic candidate Hillary Clinton specifically is touting a radical pro-abortion agenda that would force Americans to pay for abortions with their tax dollars.

On Sunday, Catholic Bishop William Murphy, head of the Diocese of Rockville Centre in Long Island, said in a letter at Masses that support for abortion “should disqualify any and every such candidate from receiving our vote,” Newsday reports.

Murphy encouraged Catholics not to participate in the “division,” “mean spiritedness” and “intolerance” surrounding the presidential election. He urged them to make serious, educated decisions about who they choose as our nation’s next leaders, and he emphasized that abortion is the most “crucial” issue of all.

Many issues are very important in our society today. But none of them can eclipse the centrality of human life, especially innocent human life in the womb or at the end of life. Above all and over all, the number one issue more fundamental and crucial than any other is abortion – that is the direct taking of innocent life, which is financed by government funds — the diversion of our tax dollars to abortionists like Planned Parenthood as well as government insistence that we Catholics like the Little Sisters of the Poor, violate our consciences to advance such programs.

Murphy did not name names, but Clinton’s vice presidential running mate, Tim Kaine, is a Catholic who supports abortions while claiming to be “personally opposed.” Kaine has flip-flopped several times on whether he will support Clinton’s plan to repeal the Hyde Amendment and force taxpayers to fund abortions.

In an interview with CNN in July, Kaine said: “On Hyde my position is the same I support the Hyde amendment. I haven’t changed that. As the vice president I have to get comfortable with the notion that I can have my personal views but I’m going to support the president of the United States and I will.”

As a U.S. Senator, Kaine has voted against the pro-life position every chance he got. Kaine took his most extreme pro-abortion action yet with his recent co-sponsorship of the so-called “Women’s Health Protection Act” (S.217), known to pro-lifers as the “Abortion Without Limits Until Birth Act.”

Every year, more than 1 million unborn babies are killed in legal abortions in the U.S., and the nation’s largest abortion provider, Planned Parenthood, gets half a billion of our tax dollars. Pro-lifers of all faiths and no faith should weigh these facts heavily before casting their vote next Tuesday.