‘Momma, all I want to be is a saint,’ Kara Jackson has told her mother. The family has visited 40 states already, so that Kara can fulfill her dream. They consider each trip a pilgrimage. 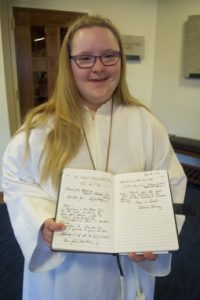 DENVER — On July 1, Kara Jackson crossed the 40th state off her list.

The 18-year-old helped serve Mass at Immaculate Heart of Mary Catholic Church in Northglenn, Colo. Dressed in her own vestments and with a big smile on her face, Jackson served with the same passion she began her journey with in 2013.

This all started because “God told me to,” Jackson told CNA. She said God came to her in a dream one night, telling her to begin the quest of helping serve Mass in all 50 states.

Her mother questioned this mission, at first.

“I didn’t think it was a good idea,” Christina Jackson said. “It was a crazy idea.” The thought of traveling to unknown areas, without financial support, and Kara’s heath complications made her mother hesitant.

But Kara was persistent. Christina and her husband, Rick, took the idea to their local priests in Middletown, Ohio, for their opinion. The late Msgr. Paul Metzger encouraged Kara because he had traveled to every state celebrating Mass. Father John Civille, their pastor, told Kara he would be her personal chaplain in Alaska and Hawaii.

With their support, Kara’s mother looked to the closest state, Indiana, to “test the waters.” Kara, having a strong devotion to the Blessed Mother, suggested stopping at St. Mary Catholic Church in Richmond.

The family said a prayer and sent a letter to the parish. That Friday, at 3pm, the pastor of the parish called back welcoming Kara. The evening before Divine Mercy Sunday, she stood with Father Kevin Morris and served Mass in her second state.

Since then, Kara and her parents have traveled across the nation during school breaks and family vacations.

“God leads us where we’re supposed to go,” Christina said. The family never has a specific parish in mind. Sometimes they end up at a small church in a strong Protestant area or a parish that has more than 12,000 parishioners, like Immaculate Heart of Mary in Colorado.

“We’ve seen it all,” the family says.

The family tells stories of churches with expansion plans and others where the pastor’s dog also attended Mass. They recalled the time Kara served with Archbishop Joseph Kurtz, president of the U.S. Conference of Catholic Bishops, in her sixth state of Kentucky. They even said their journey impacted the life of a hotel clerk, bringing him back to God.

“I don’t think of ourselves has evangelists,” Christina said, “but we really are evangelizing our faith.”

The family considers each trip a pilgrimage. Kara prays for the priests and their parishes before Mass begins. Regardless of where they travel, they say God is always with them.

Seeing the universal Church and all the Godly encounters “gives me great hope, and it has strengthened my faith,” Christina said.

Kara’s notebook filled with messages from every priest she has met documents her journey. One priest wrote a message inviting Kara to serve Mass at his home parish in Ireland. She hopes to make the trip for her 21st birthday.

“It’s emotional to see this,” Christina said, with tears in her eyes.

After struggling with infertility for many years, Christina became pregnant. When doctors told Christina and Rick their daughter had Down syndrome, they said she would never lift her head or talk. The doctors even suggested “adopting her out.”

“We brought her home,” Christina said, and have been blessed ever since.

Kara wanted to take altar-serving lessons when she was 9 years old. Her parents said she was focused and attentive the entire time. She watched daily Mass on EWTN to learn how to ring the bells.

While traveling, Kara has never gotten sick consuming Communion hosts with gluten, though she has Celiac disease.

The family will stop in six more states on this leg of their trip, leaving only Arizona, New Mexico, Hawaii and Alaska to come. Though they would love to complete their journey in the Year of Mercy, they said they will finish “when the money comes in.”

The family said people have suggested their story be turned into a book or movie. Either way, Kara said she would like to become an actress and writer one day.

Starting in August, she will attend the “Project 101 Program” for students with special needs at Butler Tech University.