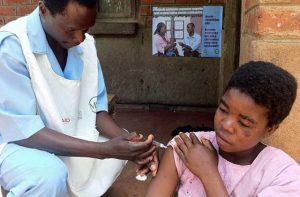 A dialogue of discomfort in the face of an epidemic:

A. What could be more important to a developing country than highly effective contraception for its women?

A. That is equally important, but not more important.

B. We agree. But what if the most effective method in such a country seems to be increasing the risk of HIV?

A. Well, none of the evidence for that so far is very strong. We must do some research that will give us a definitive answer to this question.

That, very simplistically, is the conversation that has been going on for at least a decade between the international population control establishment (A) and the HIV-AIDS prevention establishment (B) – a conversation that resulted in a World Health Organisation press release [9] in June headlined, “New study finds no link between HIV infection and contraceptive methods”.

The definitive research has been done and the main finding is greatly reassuring to the WHO and the sexual and reproductive health NGOs providing contraceptive services in southern and south-eastern Africa. This is the region of the world where the HIV epidemic is now concentrated, especially among young women – the population which is also deemed to be most in need of highly effective contraception.

For 30 years, as the AIDS epidemic took hold in many countries, evidence has been accumulating that women on hormonal contraceptives, in particular the injection best known as Depo-Provera, were more likely to become infected with HIV than those not using modern contraception. Targeted studies over the last decade showed increased risk levels of 50 and 100 percent.

This was disappointing to the WHO and others because Depo-Provera – a synthetic progesterone shot lasting three months and usually injected into muscle tissue in the upper arm (also named DMPA-IM) — and a similar injectable were regarded as the most effective method for women living far from family planning clinics (or any regular health service) and in traditional communities where birth control was suspect.

Did this highly effective method of preventing too many births in fact pose a special risk? And if so, how much of a risk?

To answer these questions a clinical randomised trial was designed with the title, Evidence for Contraceptive Options and HIV Outcomes (ECHO). Its main purpose was to compare HIV infection rates among women using DMPA-IM and two other methods: the Levonorgestrel implant (also known as Jadelle), and a (non-hormonal) copper-bearing IUD.

Sexually active young women (ages 16 to 35) who wanted effective contraception were recruited in 12 community settings (nine sites in South Africa, and one each in Eswatini, Kenya and Zambia) with high HIV prevalence, they had to be HIV negative and not have used any of the methods during the previous six months. After screening, 7829 women were enrolled in the trial and randomly assigned to one of the three methods.

The women were followed for 12 to 18 months and received ongoing health services, including counselling on HIV prevention and care, screening and treatment for sexually transmitted infections. To remain in the trial they had to contribute at least one HIV test. Retention rates were over 90 percent.

When the results were reported in The Lancet Online [10] in June there was good news and bad news.

The good news: “We did not find a substantial difference in HIV risk among the methods evaluated, and all methods were safe and highly effective.”

The bad news: “HIV incidence was high in this population of women seeking pregnancy prevention, emphasising the need for integration of HIV prevention within contraceptive services for African women.”

The take-home message: “These results support continued and increased access to these three contraceptive methods.”

In other words: Shame about all the HIV – we need to do something about that – but it’s nothing, or nothing much to do with the contraceptives we like so much.

In the WHO press release, a member of the ECHO Management Committee said that the results were both “reassuring” and “sobering”:

“After decades of uncertainty, we finally have robust scientific evidence about the potential relationship between hormonal contraception and the risk of HIV from a rigorous, randomised clinical trial,” said Professor Helen Rees, Executive Director of the Wits Reproductive Health and HIV Institute at the University of Witwatersrand in Johannesburg. “The results on this question are reassuring, but our findings are also sobering, because they confirm unacceptably high HIV incidence among young African women.”

At the end of August, WHO issued an updated guidance [9] on the contraceptives in question that means they can be used without restriction.

So, all methods safe? Full steam ahead?

Not everyone in the conversation about contraception and HIV is equally reassured. Those involved in HIV prevention and advocacy, in fact, find it very sobering.

Responding to the WHO’s reclassification of DMPA-IM, the New York based Global Advocacy for HIV Prevention (AVAC) said [11] it was “gravely concerned that this guidance will be used to justify a ‘business as usual’ approach.” The Civil Society Advocacy Working Group on contraception and HIV went further [12], saying that, “The ECHO results are not ‘good news’.”

To understand why requires listening carefully to ECHO, to three notes in particular.

1. The number of women who became infected with HIV during the trial – despite counselling and treatment – was 397, an annual rate of 3.8 percent (4 percent in South Africa) that the authors of the Lancet report describe as “alarmingly high”. The WHO requires a preventive drug regime known as PReP for rates above 3 percent.

Under these circumstances, as the advocacy groups cited above said, any increased risk associated with method use is unacceptable. However, the trial was geared to detect a 50 percent increased risk (or hazard ratio) and could not reliably detect ratios below 30 percent.

2. ECHO only compared three methods to one another, not the absolute risk of using a method compared to using no hormonal or other “highly effective” form of contraception, as most previous studies have done.

Dr Jokin de Irala, who holds the Chair of Preventive Medicine and Public Health at the University of Navarre in Spain, told MercatorNet that he agrees with the ECHO authors that, given the design of the trial, having a placebo group would have been unethical, but a comparison with HIV rates in the areas from which the women came would have been useful. As it is, “the only valid conclusion from the trial is that the three groups compared have similar rates of HIV.” Given the high rate of infection inthe trial, he adds, the ECHO finding that “all methods are safe misses some criteria of safety.”

STIs – the other epidemic

In truth, it is hard to see how anyone can feel reassured by these results from a region with what AVAC calls a “soaring epidemic [of HIV] among young women,” (who can also, by the way, infect new partners.) Among those in the ECHO trial there were high rates of other infections as well: at enrolment 18 percent had chlamydia and by the end of the trial, despite treatment, gonorrhoea stood at 5 percent. Some had herpes. It is well known that these other STIs increase the risk of HIV in the long run.

WHO officials quoted by the Kenyan paper, The Nation, said the infection figures in ECHO were “a wake-up call”, that “STIs have been forgotten” and that family planning clinics should be offering testing. Ironically, it’s long-acting contraceptives like DMPA, and even more, the implant and the IUD, that keep women away from clinics and their other services.

At the same time, as Dr de Irala points out, these “very effective” methods might lead young women to take more risks with their sexual behaviour – what is known as risk compensation. The ECHO study authors themselves noted “post-randomisation differences in self-reported HIV risktaking behaviours between groups.”

Biological reasons are also in play for young women. It is thought that hormonal contraception reduces the immunology of the vagina and cervix, which in younger adolescents is immature. A scientific report in Nature [13] in January suggested the mechanisms by which this happens with DMPA-IM.

Anything but behaviour change

Both the population control and HIV-AIDS prevention establishments agree that there is an urgent need for “integration” of their respective services and training of providers. AVAC and others insist that injectables are not suitable for all women and that there must be a greater choice of contraceptives for them, as well as PReP for those most at risk of HIV. How they will achieve all this, and who will continue to fork out the funds required is not clear. Some are pinning their hopes on a magic pill that will prevent babies and HIV at the same time.

The last thing they will consider, apparently, is behaviour change. In the 1990s the Ugandan population living with AIDS fell from 15 percent to 5-6 percent through the presidential-led ABC campaign [14]: abstain, be faithful to one partner, or if you can’t, use condoms. This strategy has been used in other African countries also with some success, where it is more consistent with traditional values.

But Western elites underestimate the peoples of the developing world, and in their continued hurry to bring down birthrates that are already falling – and are just where they should be [15] in Africa – they undermine local cultures and make whatever is faulty in them worse. Much of this is done in the name of “empowering” women, who, in southern Africa [16] at least, are now the population most vulnerable to HIV, and from an early age.

The trouble with rich elites is that when they intervene in other cultures, they only look for echoes of themselves. This is why they cannot really help African women, as the plight of those in the ECHO study demonstrates.