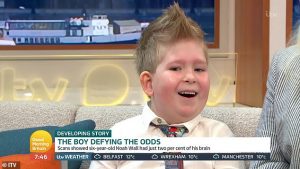 While still in his mother’s womb, the British boy was diagnosed with a long list of life-threatening ailments, including hydrocephalus and chromosomal abnormalities.

“We wanted to give Noah the chance of life,” her husband, Rob Wall, said.

Today, Noah is 6 years old and defying doctors’ expectations. His parents said Noah can talk, and he is learning to walk, surf and ski.

His brain, which at birth was just 2 percent of the size it should have been, has grown to 80 percent of its full size – stunning doctors, according to the report.

“It’s a very emotive subject. Some people say you can’t grow a brain,” Rob Wall said. “Other people say it must have always been there. But if it was and squashed up it would have been so severely damaged he would have been very mentally and physically disabled.”

His wife added: “Before he was born they gave me the option of a termination five times. We got taken into a room and they drew a circle saying ‘this brain will only be half a brain.’”

Noah was diagnosed with hydrocephalus, chromosomal abnormalities, spina bifida and other problems just three months into the pregnancy, his mother said.

Even after they chose life, she said they did not know if Noah would be born alive. The parents remembered the hope that they felt when Noah came into the world screaming,

The Walls said Noah still has medical problems and will need more surgeries, but he is doing so much better than everyone predicted.

“Every time we see the doctors they just shake their head. They’re just amazed at what he can do,” his mother said.

His story also is one of many reasons why abortions are wrong. There always is a chance that a child may survive, heal, grow and live a happy, fulfilling life.

It’s true that not every child with a serious or fatal disability will have the same miraculous recovery as Noah. But these children are just as valuable, whether they live for a few minutes or days or years outside the womb. Children with disabilities deserve the utmost care and compassion. But that compassion never should include the violent ending of a child’s life in an abortion.