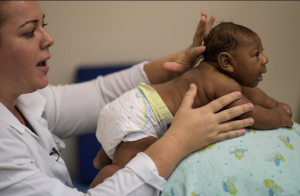 New evidence about the Zika virus and the potential link to defects in unborn babies came out this week.

A new Centers for Disease Control report [7] found about 10 percent of pregnant women who showed signs of the Zika virus had unborn babies with neurological defects linked to the virus.

The CDC tracked more than 1,200 cases involving pregnant women in the U.S. who showed signs of the virus. However, the cases with laboratory-confirmed evidence of Zika were much smaller.

The CDC confirmed 250 cases of a likely Zika infection with laboratory testing, and 10 percent, or 24 unborn babies, in those cases had birth defects.

Almost all of the cases in the CDC report involved women who contracted the virus outside the United States.

Here in Texas, at the end of March, 181 pregnant women had shown signs of a possible Zika infection — 67 of those babies were born.

According to the Department of State Health Services, seven babies were born with birth defects that could be Zika-related.

Three of those seven are confirmed cases of the virus.

That’s about 10 percent of those babies have shown signs of possible Zika infection which is on par with the national average.

Abortion has become a major issue related to the Zika virus because of the possible link to birth defects. Abortion advocates have been using the virus as an excuse to push for more abortions on babies with disabilities [9]. Some pro-abortion groups even have been scaring women into aborting their unborn babies without knowing if they have Zika [9] or if their unborn baby has a disability.

The most common defect linked to Zika is microcephaly, a brain disorder that causes babies’ heads and brains to be abnormally small. The condition has a range of severity. Some people who have microcephaly require daily care, while others live independently and have jobs.

Some have speculated that other factors may be responsible for the disabilities, rather than the virus. Some research suggests [10] the virus may not be to blame for the uptick in birth defects in certain areas of South America affected by Zika; however, research is on-going.

The Associated Press previously reported on various research estimating between 1 percent and 15 percent of pregnant women who contracted Zika in the first trimester had babies with birth defects.

Scientists also are working to develop a vaccine for Zika. In Mexico, university researchers developed a 3D printed valve to help treat unborn babies who develop microcephaly [11], one of the birth defects linked to the virus.

However, some research efforts were blocked by Planned Parenthood supporters in the U.S. House and Senate last year. The pro-abortion legislators blocked an aid bill for Zika prevention and research [12] because it did not give money to a few Planned Parenthood facilities in Puerto Rico.

The abortion chain has been heavily involved in Zika-related politics in the U.S. Last summer, Planned Parenthood sent staffers to knock on women’s doors in Miami, Florida to talk about the Zika virus, according to the Miami Herald [13]. They also gave pregnant women “Zika kits” and informational fliers.

Last spring, a Planned Parenthood activist said women who are pregnant and contract the virus ought to be able to abort their potentially disabled babies [14]. The abortion activists called killing such babies a “human right.”