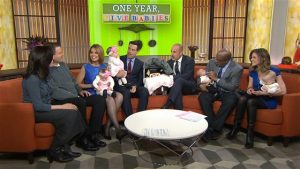 [8]They prayed for babies, and boy, did they get them: Five children in less than a year, providing a crash course in parenthood for a couple who couldn’t be happier.

Sarah and Andy Justice of Tulsa, Okla., wanted a family but had trouble conceiving, so they adopted triplets. But soon after, Sarah found out she was pregnant with twins.

“I was shocked and a bit overwhelmed because I got to thinking, added it up and I’m like, wow, if they go to term we’re about five babies in eight months. But we were really excited because it was something we’ve been dreaming of and longing for for years,” Sarah told the TODAY anchors, who had their hands full cradling the babies. Some were a little fussy during their national television debut.

The couple had been struggling with infertility for years when they turned to adoption. Just after they arranged to adopt the triplets last year, Sarah’s doctor discovered she was having twins.

The couple didn’t want to give up the triplets and officials told them they could still get all three if they didn’t back out, Tulsa World reported [9].

Now, their life revolves around their five kids, with lots of help from their family and their church. They get about three hours of sleep each night, though not necessarily in a row, Andy noted.

“My husband says all we do is babies, everything else in life has pretty much stopped,” Sarah said. “But it was something we’ve wanted so badly that we love it. It’s not to say it’s not a lot of work and we’re not tired a lot but it’s great. We just really love having these children.”