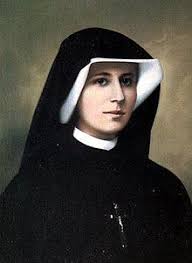 [8]This is what tuberculosis can do to you: Attack the lungs, kill tissue, and spread to the brain and the bones. Coughing becomes a given — sometimes mucus, sometimes blood. Breathing can become difficult. You may wheeze and feel chest pains and sweat excessively. You may become fatigued and feverish and lose weight such that you become a mere fragment of your former physical self.

Eighty years ago, on Oct. 5, 1938, St. Maria Faustina Kowalska, the great apostle of Divine Mercy, died at the age of 33 from complications from tuberculosis and other ailments, which included internal hemorrhaging.

Here is how Sr. Stella Kozlowska described the once-attractive Faustina just days before her death, as explained in Ewa K. Czaczkowska’s Faustina: The Mystic & Her Message [9] (Marian Press): “Her face was gaunt, and its shape had changed. Her skin was yellow, and her eyes were huge and sunken … .”

Other sisters later said they found it painful to even look at her. Yet they reported that, all the while, Faustina remained stoic, even cheerful and smiling.

“Sister dear, you are not afraid of death?” Sr. Crescentia asked her, according to Maria Tarnawska in her now-out-of-print Marian Press book, Sister Faustina Kowalska — Her Life and Mission.

“Why should I be?” Faustina responded from her deathbed. “All my sins and imperfections will be consumed like straw in the fire of the Divine Mercy.”

On the day of her death, Faustina, in agony, announced, “Today Jesus is going to take me with Him,” writes Czaczkowska. Faustina said so, not only with confidence, but with longing. The sisters gathered around her for one last time and prayed for her as her mind began to dim. The future saint took her last breath at 10:45 p.m. In her last moments, she lay quiet and peaceful.

Her pursuit of mystical union

Saint Faustina’s now-famous Diary gives us a fuller picture of her state of mind as she approached death. As her physical pain and exhaustion grew in intensity, so, too, did her mystical union with Christ.

She details a three-day retreat less than four months before her death (see Diary, 1753-1779).

During the retreat (led by Christ Himself), He assured her of the sanctification and salvation available through the Sacraments, particularly the Holy Eucharist and Confession. He taught her to totally abandon herself to His will; to put her “self-love in the last place”; shun gossip “like the plague”; act kindly to those who sought to cause her harm; hide in His Heart whenever confronted by temptation and discouragement; trust He is always with her; pray for the sick and dying; and to always be adorned by the virtues of humility, purity of intention, and love.

But He also minces no words with regards to the sufferings ahead. He says He will “not delude” her “with prospects of peace,” and tells her that her “body and soul will often be in the midst of fire.”

“Although you will not feel My presence on some occasions,” Christ says, “I will always be with you. Do not fear; My grace will be with You” (1767).

Jesus directs His words as much to Faustina as to us. Her recording of the retreat reads like a crash course geared to all who seek holiness.

By then, she could no longer live a normal community life. Still, strengthened through the Holy Eucharist, she taught herself to put her sufferings to divine use, to transform them into a daily oblation for the salvation of souls.

Though undated, Faustina’s final Diary entry is believed to have been in mid-June 1938. She no longer had the strength to continue. But by then, what else could she say? Save for a final Confession and Last Rites, she was fully prepared to die. In her final Diary entry, she writes:

Today, the Majesty of God is surrounding me. There is no way that I can help myself to prepare better. I am thoroughly enwrapped in God. My soul is being inflamed by His love. I only know that I love and am loved. That is enough for me. I am trying my best to be faithful throughout the day to the Holy Spirit and to fulfill His demands. I am trying my best for interior silence to be able to hear His voice … (1828).

As it was for a saint, so it is for ourselves: When we keep our eyes fixed on Jesus’ Merciful Heart, we should rest assured that someday, like Faustina, we will rest in peace.