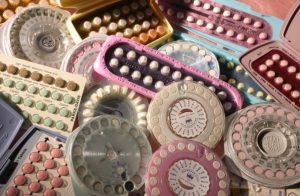 [7]In a study published in the journal The Linacre Quarterly [8], Dr. Lynn  Keenan and collaborators did a systematic review the literature to determine  the risk of objectively confirmed Venous Thrombosis with the use of Hormonal contraceptives  in healthy women compared to nonusers.

The authors searched 1962 publications and identified 15 publications that fit the criteria and were  included.

The researchers found the following results.

1.Users of oral contraception with levonorgesterol had increased risk of VT by a range of 2.79–4.07.

6. The risk of fatal VT was increased in women aged fifteen to twenty-four by 18.8-fold.

The authors of the study concluded  “current hormonal contraceptives carry a three- to nine fold risk of VT compared to nonusers. Third-generation contraceptives are about twice the risk of the other generations. Combined HC vaginal rings and transdermal patches carry a six- to eightfold risk. Obesity can double the risk compared to normal weight. Use during the first year carries the greatest risk, especially in women under age thirty, where the risk increases thirteenfold.”

Informed consent is needed to provide women with information on the medical risks of oral contraceptives. Women should be made aware of these risks when choosing family planning. Abstinence or fertility awareness-based methods are licit, safe, and effective options for women.