How many Holy Innocents were killed by King Herod? [8] 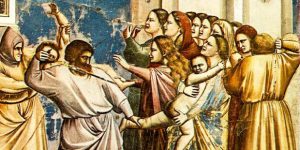 Ever since the 5th century the Church has commemorated a separate day in memory of the children killed by King Herod after Jesus’ birth. Matthew is the only one to record the event and the details surrounding it are slim.

Then Herod, when he saw that he had been tricked by the wise men, was in a furious rage, and he sent and killed all the male children in Bethlehem and in all that region who were two years old or under, according to the time which he had ascertained from the wise men. – Matthew 2:16

This type of senseless action was typical of Herod, a deranged ruler who also killed his wife and two sons during his lifetime. Herod’s immediate response to those who opposed him was to eliminate them.

The biblical episode is usually labeled a “massacre,” to emphasize the ruthless spilling of innocent blood. It was a terrible act, though it pales in comparison to the modern day killing of innocent children throughout the world.

According to the Catholic Encyclopedia, [9] “The Greek Liturgy asserts that Herod killed 14,000 boys (ton hagion id chiliadon Nepion), the Syrians speak of 64,000, [and] many medieval authors of 144,000.” However, this number of children is greater than the entire population of Bethlehem at the time of Jesus’ birth.

Professor William F. Albright [10] “estimates that the population of Bethlehem at the time of Jesus’ birth to be about 300 people. The number of male children, two years old or younger, would be about six or seven.” Other scholars [9] claim the number was between 10 – 20 male children in Bethlehem and the surrounding area.

This low number of deaths is the likely explanation for why there exist no secular historical accounts of the massacre. Simply put, a handful of children killed by a local ruler was not “noteworthy” enough.

Regardless of how many children were killed, their deaths were a horrible atrocity, and Jesus could have been part of that number if Joseph had not been warned to flee beforehand.

The Church’s commemoration of the event reminds us of the sanctity of all human life. In the end it doesn’t matter how many children were killed. The Church honors their memory whether it was 100 children or a single child that was killed.

All life is precious, especially any innocent child killed at the beginning of life.