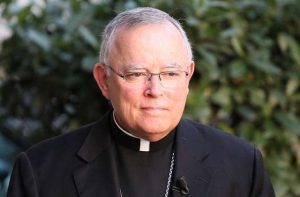 Baltimore, Md., Nov 16, 2016 / 05:05 pm (CNA/EWTN News).- Infidelity, divorce, sexual violence, pornography, hook-up culture – all things that have both increased en masse in society over the last few decades, and have seared pain into the lives of individual men and women.

So how do we even begin to address the problem? By people – especially the youth – choosing to live in true, authentic and virtuous community with one another, says Archbishop Chaput.

“We’re getting a culture that’s just hugely preoccupied with sexuality, and being restrained sexually is not considered a virtue anymore, apparently. I think that’s very hurtful to everyone,” Archbishop Charles Chaput of Philadelphia, who chairs the U.S. bishops’ working group on Amoris laetitia, told CNA on Monday.

The archbishop, who in a lecture in September noted a marked increase in the number and kind of sexual sins he had heard in the confessional throughout his priesthood, told CNA that young Catholics need virtuous relationships to live chastely in the midst of a promiscuous culture.

“I think it’s really important for us to encourage young people to form communities of young people, peers, who can give them support in the face of this culture of cheapening human relationships,” he insisted.

The exhortation was the fruit of two synods on the family, which sparked controversy amid speculation over whether there would be a change in the Church’s practice that the divorced-and-remarried may not receive Communion.

Since Amoris laetitia was published, some of its vague language has inspired conflicting interpretations. Some have seen it as a break with the Church’s teaching tradition, others as not changing the Church’s teaching. Still others consider it a progression toward a new pastoral praxis, or that it need not be interpreted at all.

For his part, Archbishop Chaput noted in pastoral guidelines for his archdiocese that in putting Amoris laetitia into practice, “the Holy Father himself states clearly that neither Church teaching nor the canonical discipline concerning marriage has changed.”

Francis’ exhortation “should therefore be read in continuity with the great treasury of wisdom handed on by the Fathers and Doctors of the Church … and previous magisterial documents,” he said.

In his Sept. 15 Tocqueville Lecture at the University of Notre Dame, Archbishop Chaput had insisted that the task of rebuilding society comes from personal conversion, not politics. Even if presidential candidates might be unpopular and controversial, he noted, they came from a flawed culture and were nominated by the citizens.

As evidence of this cultural decline, he noted that over recent decades the number of sexual sins he heard in the Sacrament of Confession has increased, as well as their “scope,” “novelty,” “violence,” and “compulsiveness”:

“As a priest, what’s most striking to me about the last five decades is the huge spike in people – both men and women — confessing promiscuity, infidelity, sexual violence and sexual confusion as an ordinary part of life, and the massive role of pornography in wrecking marriages, families and even the vocations of clergy and religious.”

Even more women are now viewing pornography, he said.

All these sins “create human wreckage,” he added, and on a mass scale they bring about “a dysfunctional culture.” Thus, “as families and religious faith break down, the power of the state grows.”

However, given that President-elect Trump has said lewd and degrading things about women, how can the Church begin rebuilding the culture after this election season?

It starts with community, the archbishop said. “I don’t think anybody can be chaste alone, so you need to pick a spouse who helps you to be that way.”

These virtuous communities are “really what the Church should be,” he added. “It should be a community of people who think like Jesus and want to act like He calls us to act.”

“So in some ways, that’s the foundational purpose of the Church, to provide us companions in virtue and worship, and care for the poor. We’re supposed to be companions that call one another to all those things that are essentially part of being a Christian,” he added.

The government has a role in protecting this culture, he said, but has abandoned its duty to protect children and families from the effects of pornography by allowing it in the name of “personal freedom.”

Archbishop Chaput also discussed with CNA how Catholics should react to the recent presidential election – with both “gratitude” and “concern,” he said.

“One, gratitude to God for the opportunities it’s going to give us to protect the Church on religious freedom issues,” he said, noting anticipated changes to the HHS birth control mandate. “And also on the life issues, it seems like there’s openness to supporting the Church’s position on life that wasn’t present before.”

However, serious concerns persist on issues such as immigration, he added, with “the possible deportation of people that will undermine family life in a very serious way.”

“There are a lot of people in my diocese who are very much afraid because of the things they’re imagining that’s going to happen. And that can be hugely disruptive and destructive of the life of families,” he explained.

“Fear is not a good way to live your life. And intense fear for children is especially disruptive. So I think sometimes because of our excitement about the pro-life positive news, we can be naïve about the dangers that exist.”

Ultimately, Catholics should be open to working with the Trump administration on areas of agreement with Church teaching, but must also be vigilant for other areas of policy that oppose Catholic social teaching.

“I think it’s really important to do our best to give the new administration the chance to develop its plan and support it in the good things that it proposes, and to express our concerns about the things that are worrisome,” he said.

“But it’s important for us to pray for government officials. The Scriptures call us to do that.”