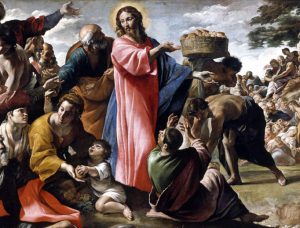 [9]For the past four weeks, the Church has read from John 6, Jesus’ teaching about Communion, the Eucharist. She wraps that extended study today.

For the past four weeks, we explored the meaning of communion as it relates to giving of human life, illuminated by the teaching of Humanae vitae. We discussed the person of the spouse and of the child, and what love demands in order to create and sustain a communion of persons between myself and them.

Two closing thoughts on this catechesis of communion.

John F. Kippley, the great American pioneer of the natural family planning movement, has written about the relation of marriage, parenthood and the Eucharist. (If you have not read it, see his Sex and the Marriage Covenant). Some might be deterred by his frank association of the relationship of the Eucharist—communion between God and the Christian—and marriage—the communion between man and woman in sexual intercourse.

But there are two important points to draw from that association.

The Church is not devaluing sex. The Church is demanding that we accept the nobility of what God has given us.

As Jesus wraps up His laying out the truths of the Eucharist, today’s Gospel treats us to the reaction. His audience announces, “This saying is hard; who can accept it?” And the result is that “many returned to their former way of life.”

Isn’t the same true of Humanae vitae? Yes, that “saying is hard; who can accept it?” Life is so complicated; children cost so much; times have changed; the world is different. And many “returned to their former way of life.”

The difference is that John does not say Jesus’ “disciples” who “returned to their former way of life” were just “dissenting” Christians. It doesn’t say that they recognized that Jesus’ Eucharistic Teaching was a matter of whether it was acceptable to their “conscience.” And John does not say that, even though Jesus laid down a clear marker of what His Teaching meant, the “Holy Spirit” was creating a new “sensus fidelium” among those other “disciples,” so that they were just “Christians” with a “different” take on the Eucharist. No—they “went away” to “a former way of life,” which is not the life of a follower of Jesus.

Note that their “consciences” too must have told them that Jesus was nuts in saying “this is my body, this is my blood.” And perhaps some, in good conscience, said He’s off His rocker and left. In that, they did right—they did not violate their conscience. But, at the same time, we know in faith the objective truth: their choice in conscience is objectively wrong, and so their conscience is in error.

So why do we equivocate when today’s “disciples” want to pretend that being Catholic but rejecting Humanae vitae is compatible? Yes, conscience is sacred, but not infallible. Conscience still must account to the Truth (not just “my” truth).

My guess is that some of those who turned away thought about what Jesus said and consciously rejected it. But my guess is also that most of those in that crowd simply did not understand Him and were not about to take the time to try. Life is, after all, so complicated, the world has changed, times are different, people are busy …. And, so, they went off, with nary a thought about returning to “their former way of life.”

How many of those who have heard cursorily that “the Church is against birth control” don’t even bother to inquire what Humanae vitae really teaches—and why—but simply go off, with nary a thought about returning to “their former way of life?” After all, times have changed, life is so complicated, people are busy, kids are costly ….

Likewise, Jesus did not adjust His Teaching. He did not dial back its demands. He did not propose a “gradualism” of the Real Presence. He’s pretty clear. Watching the masses depart, Jesus does not offer a watered down Eucharistic-lite teaching to His disciples. He puts the question to them: “Do you also want to leave?” Because, in the Father’s house, doors are not locked from the inside.

Like today, Jesus first reports “just the facts.” Today—that the crowd turned away. In the Synoptics—“who do people say I am?” to which Jesus gets the report, “John,” “Elijah,” “some prophet.”

But then the questions turn existential: now what about you? Because what you say (“who do you say I am?”) or what you do (“do you also want to leave?”) is an existential turning point: are we going to go on together or not? There’s no compulsion, but there’s also no compromise.

And, like in the Synoptic Gospels, Peter answers. “You are the Christ!” “Where else can we go?” And the Gospel is clear about the other 11: they follow Peter. They don’t say, “Well, this guy tends to be precipitous in his declarations, we’re kind of with you, we’ll see.”

And Peter—especially through Paul VI—also answered an existential dilemma for modern Catholics. Are we like the other 11? Or do we turn and go? Because, contrary to some modern theologians, there is no “fifth column” among the other Apostles.

That’s not to say they understood it all, even less that they wouldn’t fail. Peter himself is proof of that. But they did commit themselves to a “way of life” that others did not, because “you are the Christ, where else shall we go?”

What should that teach today’s Catholic, for whom the teaching about communion of persons in Humanae vitae is also, undoubtedly, “hard?”