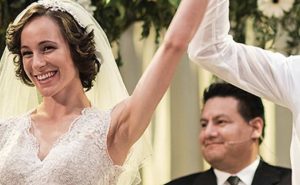 AUMSVILLE, Oregon, October 11, 2017 (LifeSiteNews [7]) — Assisted suicide advocates call their cause “death with dignity,” but they never saw the likes of Esther Ybarra.

Stricken with Stage 4 cancer just as life was blossoming at age 19, Esther exemplified what a true “death with dignity” is.

She died in July after two years of degenerating from a 5-foot-10, 175-pound college scholarship athlete and female athlete of the year to a frail and broken 100-pound hospital patient struggling to breathe. But those she left behind say Esther was the strongest person they’ve ever known, whose enduring, ultimate trial-tested faith in Jesus Christ changed their lives.

Esther had always been athletic and competitive. The oldest of seven, she loved gymnastics, dancing, and kicking. Ron and Teresa Suelzle told World Magazine [8] that at two years old their daughter used cabinet drawers to climb up to the bathroom sink to brush her teeth.

“I’m capable,” the toddler with the beaming smile told her dad.

As she grew and joined extracurricular sports, Esther was driven to compete. On the ceiling above her bed she taped, “Pain is weakness leaving the body.” “No excuses.” “If I want to WIN, I will work harder.”

Finishing high school at the peak of health and athletic prowess, Esther even as a high school junior could squat 225 pounds and bench-press 155. Corban University gave her a scholarship to play volleyball.

Though she was raised in a Christian home, at one point the star athlete felt so strong that she didn’t need God anymore. That would soon change.

Two months into college, Esther’s life was turned upside down. When her back unexpectedly gave out, a biopsy near her fractured vertebra proved malignant. She was diagnosed with Stage 4 Alveolar Rhabdomyosarcoma, a deadly soft tissue cancer.

Everything changed at that moment. For the better.

While her homemaker mom later recalled “My head was swimming” at her daughter’s hopeless diagnosis and her high school teacher dad “felt like we had hit bottom,” Esther paused, then shook her doctors’ hands.

“I want to thank you for telling me,” Esther said. “That must have been difficult for you.”

For the next two years, Esther became the Rock of Gibraltar. It is astounding how one woman’s faith can unite and sustain an entire family — even an entire community. When Esther faced the gravest diagnosis known to man, she calmly thanked her doctors. When her boyfriend broke up with her, she never lost faith in Jesus. When she lost her hair to chemotherapy, she never blamed God.

Sure, she asked, “Why?” And there were plenty of tears. Esther was not a stranger to anxiety or fear, either. But by having lost it all, she somehow gained something.  Something priceless.

“God took away everything that was important to me,” Esther explained. “He took away my ability to play volleyball, work out, go to school, and my hair. All I have left is God, my family, and my friends. And I’ve never been better.”

There was a period of remission. The whole family clung to fragile hope as Esther’s cancer treatment seemed to help. During that time, Esther met Jacob Ybarra, a track and field athlete at Corban.

When he took her out on Valentine’s Day, Esther was bald as a cue ball. She was also, understandably, somewhat guarded.

“She was a scared girl with a really, really strong shell,” Jacob told World’s Sophia Lee [8]. “She acted like she was real tough and can do everything by herself, but she really needed help.”

Eventually, Jacob and Esther fell in love. When he asked her to marry him, Esther thought her life had turned around.

But not long after Jacob and Esther’s engagement, they got the crushing news that new cancer had formed and grown in her lungs.

Defying conventional wisdom, the two lovebirds wed in October 2016. Lee, who spent an entire day with the family recently, explained that when one was weak, the other provided strength.

“At times, Jacob returned home to find Esther in tears because she couldn’t finish the housework, and he taught her it was OK to rest. Other times, he came home to find his wife deep in prayer, and he sought to enjoy such intimacy with God as well,” Lee wrote [8].

“Esther’s greatest strength was her relationship with Jesus,” Jacob summarized [8]. “Jesus was the only reason she could still sing, still fight.”

The couple became unexpectedly pregnant, but at three months along Esther hemorrhaged, and tiny, perfectly-formed Thaddeus was stillborn.

Cancer treatments no longer helped as Esther grew dramatically worse. The fluid building up in her lungs made it progressively harder to breathe. Jacob helped ease the fluid buildup.

Oregon legalized assisted suicide in 1997, and if anybody qualified, it was Esther. But instead of killing herself, even when in great pain, Esther sang.

One of her favorite hymns to sing was “What a Friend We Have in Jesus,” and she didn’t care if others heard her. Hospital staff described her as the most joyful person in the room.

So often Esther would listen to someone’s troubles, lying on her deathbed herself, wiping away their tears and offering to pray for them. And any time she could, Esther would talk about Jesus with doctors, nurses, aides, and just about anyone.

“They were concerned about saving her life, but she was trying to save their souls,” Jacob told [8] Lee.

Instead of killing herself, Esther saved souls. Of that, her family and relatives testify.

“She fully trusted what was supposed to happen, and that was the most beautiful thing I had ever seen,” her cousin, Kim Klaus, shared [8].

“She learned how to be instead of always doing,” her sister, Elizabeth, 20, said.

“Just by the way she lived, giving up everything for Christ, she really inspired me,” sister Marilyn, 13, said.

On July 24, 2017, Esther opened her eyes for the last time, in the loving presence of her family. After an all-too-brief goodbye glance, she was gone.

Last month, a “Celebration of Life” was held in Esther’s honor. Six hundred people gave thanks to God for the life and for the death of Esther Ybarra. Many gave testimony of the spiritual paradigm shift they experienced just by knowing the woman who truly “died with dignity.”

There’s more in Lee’s beautiful account [8] of how Jacob and the family are now coping, but one lesson — among many — stands out.

Esther’s tragic plight has a lot in common with others who ultimately decide to kill themselves, with society’s legal blessing. Another vivacious woman stricken with cancer way too young, Brittany Maynard, became the poster-child for assisted suicide in 2014.

Lee points out that both Esther and Brittany may have had a common tragedy, but their responses were as different as life and death.

Brittany aggressively decided to fight for the right to kill herself, considering suicide as her “death with dignity,” and the state government blessed her death wish. She justified it as best for her family, because her suffering would be a “nightmare” for them. She sought to avoid “fear and uncertainty” by taking her own life.

In contrast, Esther sought to live what time she had left “to the glory of God.” While death has no dignity, Esther prized the days and used them to draw closer to Christ and to her family. In her suffering, she comforted those around her. She truly lived the hymn, “I Surrender All,” submitting her unknown future to her Lord.

As a result, Esther’s death, though tragically sad, inspired her family and countless others to see what truly matters in life. And as a result, her death brought eternal life to those around her.

“Her legacy is not one of despair,” one person said at Esther’s memorial. Instead, Esther’s awesome example encouraged all who came near her to “choose joy every day.”

“For the joy set before Him, He endured the Cross, despising the shame, and is now seated at the Right Hand of God the Father.” (Hebrews 12)