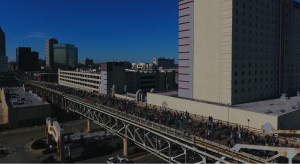 A cool, crisp morning did not stop thousands of pro-life advocates from flooding the streets of Shreveport, Louisiana in the second of three similar weekend events in the Pelican State, KSLA-12 News [8] of Shreveport reported.

“We want to fight for the silent, the ones that can’t speak for themselves,” said Mary Britt, who supported the Louisiana Life March North.

The Shreveport event follows a similar event in Baton Rouge the weekend before, and there will be a third and final pro-life march in Alexandria this weekend. Some estimated the march drew as many as 9,000 pro-lifers to the streets to march in defense of unborn babies’ right to life.

However, abortion supporters also showed up at the event.

“The funny thing is that there are no babies involved in abortion,” stated Debbie Hollis, Vice President for Louisiana’s National Organization for Women, according to KSLA. “The fetus is not even viable until 24 weeks gestation. And we do have a ban at 20 weeks here in Louisiana. So, no one’s killing babies.”

But Hollis’s pro-abortion semantics hide the truth. Whether called a fetus or a baby, the human being in the womb is a totally unique, living human being who deserves a right to life.

A Journal of American Medical Association Pediatrics [9] study demonstrates how premature babies born at 22 to 23 weeks LMP (20 weeks post-fertilization) are surviving at a greater rate than ever before. These very premature babies, when provided “active” care, survived 67 percent of the time until hospital discharge after active care, and 85 percent of them survived without severe complications.

“With intensive medical care, some babies born this week might be able to survive,” said the Mayo Clinic of babies born at 23 weeks.

Yet, babies at this stage still can be legally aborted for any reason in many states across the U.S.

“Women do die when they don’t have access to safe, legal abortion,” Hollis continued. “We all know the horror stories that our grandmothers told us before the ’70s.”

This also is a manipulation of the truth. Though the birth process has been the same since the beginning, standards of prenatal care and hygiene have improved since the days of our grandparents and great-grandparents. Blood loss and infection, childbed fever, and postpartum hemorrhage were more common causes of death in generations of yesteryear.

This isn’t to say that some women may not die during childbirth, with a rate of 24 deaths per 100,000 live births, up from 19 deaths out of 100,000 for the years 2000-2014, according to Time Magazine [12] citing the medical journal, Obstetrics & Gynecology. However, the report continues in stating that the World Health Organization determined half of these deaths to be preventable.

In the case of abortion, a life is lost 100 percent of the time: that of the child.

“There’s just absolutely no need in it,” said Betsy Henderson who supported the pro-life march. “There’s other places a baby could go. There’s women that are hurting and they want to have babies.”