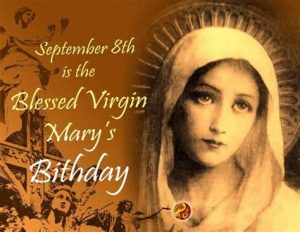 [7]Happy birthday, Blessed Mother! We love you dearly! This article was written by Fr John A Hardon  S.J encouraging us to model our faith in the faith of Mary.

Faith after the Example of Mary

There is no human person in the annals of history whose faith was deeper or more precious in the eyes of God than that of His Mother, Mary. As we read the Gospels, we see something of what this means.

At the Annunciation, Mary believed that she was being invited to become the Mother of the Most High. When the angel explained to her how she would conceive the Redeemer, without losing her virginity, she made an act of faith, “Be it done to me according to your word.” She believed what the angel had told her, “Nothing is impossible with God.” When she conceived her Son, she believed that she was carrying her Creator in her womb. No mother’s faith before or since has ever been greater. In fact no woman’s faith can be Mary’s equal. When we say in the Hail Mary, “Blessed art thou among women,” we are affirming the fact that Mary was so blessed by God because she so deeply believed in the God whom she carried for nine months before His birth. This, we may say, is what the women of the world today most need to be blessed with by their Lord: something of the faith of the Blessed Virgin Mary, the Mother of our Creator.

At the Visitation, she believed what Elizabeth told her when she addressed Mary as “the Mother of my Lord.” She believed what Elizabeth told her when the unborn John the Baptist stirred with joy in his mother’s womb. Why did he stir with joy? Because Mary began to exercise her mediation of grace from Jesus whom she was carrying in her womb. Mary’s words in Elizabeth’s ears, as the Church believes, sanctified John and enabled him to be born without sin.

Mary believed every word that she said in the Magnificat:

At Bethlehem, Mary believed what the shepherds told her about the angels announcing the birth of the Savior. She believed that God does give His peace to those who do His will.

At the Presentation Mary believed that her Son would be contradicted, opposed, and finally crucified. She believed that her own soul would be pierced by a sword. She expected suffering. She knew that to accept Christ means to embrace the cross.

At Cana Mary believed that Jesus could work the miracle of changing water into wine. That is why, after apparently being rebuffed by Him, she told the servants to “do whatever He tells you.” Jesus worked the miracle that His Mother asked Him to perform.

On Calvary Mary believed that the dying Man on the cross was God. She believed that Jesus would rise from the dead. Her faith never wavered. That is why over the centuries Saturday remains Mary’s Day or, as it is also called, Faith Day.

Our Faith Modeled on the Faith of Mary

There is nothing more needed in the Pro-life Movement than a deep faith in the providence of God. There is nothing which pro-life apostles need more than a share in the faith that Mary had when she saw the Author of Life murdered by His own creatures.

What does it mean to model our faith on that of Our Lady? We must believe without comprehending. We must believe against all human odds. We must believe that God has an all-wise purpose in permitting the anti-life crimes in the world today. We must trust that He will bring good, even greater good, out of greater evil. We must trust in God’s providence, that where crime is so abundant there God’s loving mercy will be even more abundant.

Let us be clear, however. Christ is giving us this grace to believe the incomprehensible and to accept the humanly unbearable. But we must cooperate with this grace, even as Mary did. The heart of this cooperation is knowing what Christ wants and then doing it. That was Mary’s message to the servants at Cana. They did what Christ told them to do. Then, as the poet tells us, the water looked at its Maker and blushed.

Like Our Lady we should expect miracles. The highest miracle is not moving mountains. It is moving human wills from self-idolatry to submission to the will of God. This is the moral miracle that we should expect if we hope to convert a society in which innocent people are murdered, and the murderers become leaders in the modern world.

Prayer through Mary to her Divine Son

We commonly speak of praying to Mary. This is correct provided we understand what this means. What do we mean? We mean that because Mary is the Mother of Jesus, and Jesus is God; therefore whatever she asks of her divine Son, He will grant her. But we must ask. We must keep asking. We must keep asking confidently, trusting that our prayers will be heard.

That is why the Memorare is such an important prayer in Catholic Church and, I would say, indispensable in the Pro-life Movement. We tell Our Lady that “never was it known that anyone who fled to thy protection, implored thy help, or sought thy intercession was left unaided.” That is why we continue, “Inspired by this confidence, we fly unto thee, O Virgin of Virgins, our Mother, to thee we come, before thee we stand, sinful and sorrowful. O Mother of the Word incarnate, despise not our petitions, but in thy mercy hear and answer us. Amen.”

Mary’s power of intercession with her divine Son is beyond human calculation. It is no wonder, then, that most of world-famous shrines are dedicated to Our Lady. Centuries of Christian experience have taught the people that Mary is the wonder-worker used by her divine Son to do what only God can perform. Only God can change a culture that destroys human life into a culture that respects even the life of an unborn child. But Mary must be invoked by us so that she, in turn, may intercede with her Son to change hearts of stone into hearts of selfless love.

I wish to make two recommendations to those engaged in the Pro-life Movement. Following the example of Mary, they must grow in their faith; and they must cultivate a deep loving devotion to the Mother of God.

Growth in the Faith.

Thank God there are people from various faith traditions in the Pro-life Movement. There are Orthodox Jews and Evangelicals; there are Mormons and Southern Baptists; there are Anglicans and Eastern Orthodox Christians. But the leadership in the pro-life cause must come from believing, practicing, and instructed Catholics. Why do we say this? We must say this because the Catholic Church has the fullness of God’s revealed truth. Let us be honest. One reason for the rise of the anti-life forces throughout the world is that Catholics have not been as humbly believing, faithfully practicing, and well instructed in their faith as they should be. Concretely, this means that we must grow in our faith by becoming more Marylike in our belief.

All of the foregoing are indispensable for lasting programs in the Pro-life Movement.

The Pro-life Movement will grow in the measure that we Catholics practice devotion to the Blessed Virgin Mary, Mother of God. Why? Because in the Pro-life Movement we are not struggling with mere flesh and blood but with the powers of darkness–in high places, which means with the devil and his human legions on earth.

In every major crisis over the centuries, the Church has appealed to Mary to overcome the forces of evil. That is why we absolutely must develop an extraordinary devotion to the Blessed Virgin Mary. The daily Rosary must become an essential part of our daily life. The daily Angelus, morning, noon, and night, should also become part of our daily living. A picture or statue of Our Lady should be an integral part of every Catholic household. Enrollment in a confraternity of the Blessed Virgin Mary and wearing a medal of the Blessed Virgin should become normal for every professed Catholic. Spiritual reading about Our Lady should become part of the mental diet of those, like us, who believe that Mary is the Mother of our God. Saturdays are not just ordinary days. For almost two thousand years, Saturday has been called Mary Day and Faith Day. Why? Because she alone of all the followers of Christ never wavered in her faith in His Resurrection from the dead. From childhood, my widowed mother and I never ate meat on Saturday. It was the least, I was told, that we can do to show our love for the Mother of Jesus.

It is surely not coincidental that the five hundred million Moslems throughout the world have a great love for Mary, the Mother of Jesus. In our day, the Moslems are almost unique in the non-christian world for their opposition to the pro-death movement which has reached a peak in the Beijing Conference which is now meeting, ironically, under the auspices of the United Nations.

May I suggest the following prayer to our Blessed Mother. You compose your own prayer, but this is what I recommend:

“Mary, Mother of God and our Mother, obtain for us from your divine Son something of His great love for human life, which He received from you and began in your womb. Help us to exert ourselves to the limit to safeguard the sanctity of all human life, whether born or unborn, whether helpless or strong. Ask Jesus, the Light of Life, to enlighten the leaders of nations that human life is to be loved, because that is why we are conceived–to serve God by loving others here on earth and be happy with Him and with our families, for all eternity. Amen.”