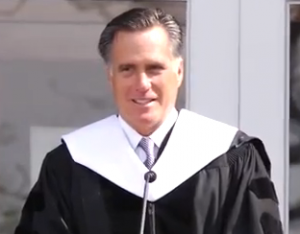 [9] BUENA VISTA — With a word of thanks to Southern Virginia University students who pitched in on his presidential campaign, Mitt Romney invited the school’s 145th class to dive wholeheartedly into life to raise families and serve God.

“Hundreds of you gave up vacation time to help a candidate for president, for which I owe you deeply. Thank you so much,” he said.

But he didn’t come to talk politics to the small college where most share his Mormon faith.

In only his second public speech since losing the election, Romney set his theme by quoting a verse from the Gospel of Luke when Jesus advised fishermen who had failed to catch anything to head farther out and launch their boat into deeper waters to set his theme.

“You only live one life. Don’t spend it in safe, shallow water. Launch into the deep. If you meet a person you love, get married. Have a quiver full of kids if you can. Give more to your occupation than is expected of you. Serve God by serving his children.”

It wasn’t all serious. Romney joked about how the American dream has changed from owning a home to getting the kids out of the home you own, and about how when he was young, he wondered if he would like children, because “they cried, they were intrusive, and stuff was always coming out of their noses.”

But he went ahead and raised five sons with his wife, Ann.

He told the roughly 120 graduates that to marry and to have children are paths to an abundant, happy life. He told a story about how Ann won applause from a hard-charging group of Harvard Business School students when she described her choice of career as a full-time mother.

“Live for purposes greater than yourself. Lose yourself in the service of others,” he said. “The promise is this: Launch out into the deep, and your nets will be filled.”

He told the graduates of the college about what he called another launch into the deep — the missionary work that so many young Mormons embark on when they finish school. It is a time many Mormons say was the hardest in their lives, but also the best, he said.

“Mission years are the best years because they are the hardest years,” Romney said. “They are living life to the fullest, beyond oneself, beyond comfort. Serving God takes us into the deep waters of life.”

But Romney continued with some words of caution.

“I don’t think God cares whether you get rich … life on this Earth is about learning to live and work in a place where God does not make everything work out for good people,” he said. “The best advice I know is to give those worldly things your best but never your all.”

And he reminded the students that serving God is something all can do, telling a story a friend had told him about seeing 85-year-old Russell Nelson , one of the 12 members of the Mormons’ governing body, shoveling a neighboring widow’s walk after a snow.

Romney shook hands with each graduate after they received their diplomas.

“They gave me the courage to try new things,” he said.

“We were all rooting for him [Romney],” said graduate Kelsey Beck , who came from Idaho to attend the college. “It’s great to have him come.”