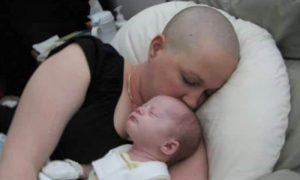 [8]Almost 11 years ago, Sarah Wickline Hull received some of the worst possible news that a pregnant mother could hear: She had aggressive cancer, and both she and her unborn baby could die.

Wickline Hull said her doctors encouraged her to have an abortion, but she refused.

Today, she is cancer free and her daughter is a happy, healthy 10-year-old.

In a Facebook post in January [9], Wickline Hull shared her story as the debate about legalized late-term abortions erupted again in the United States.

“People are talking about the medical necessity of abortion to save the mother’s life. I was one of those mothers,” she wrote.

She struggled with infertility for years before becoming pregnant with her daughter. Then, at 20 weeks, Wickline Hull was diagnosed with an aggressive form of cancer that was cutting off her airway.

“I will never forget when the first doctor, an oncologist, mentioned abortion,” she said.

Immediately, she rejected the idea of aborting her unborn daughter, saying, “I knew I would rather die and give birth.”

A second doctor also urged her to consider abortion after listing a number of problems that her baby may have.

“I stood my ground and refused,” she remembered. “He said, ‘That is ok. The baby will probably spontaneously abort anyway.’”

Eventually, Wickline Hull said she found doctors who supported her decision to choose life for her baby. At 34 weeks of pregnancy, she gave birth to a healthy baby girl.

“I will be celebrating 10 years cancer free in May,” she said. “I have a healthy, beautiful, bright, precious 10 year old daughter who is a living reminder that doctors do not know everything.”

Wickline Hull’s courageous story is one of many. LifeNews has reported numerous stories about mothers who chose life [10] for their unborn babies after being diagnosed with cancer [11]. Most of the mothers survived the cancer, while a few sacrificed their lives for their babies.

New research provides growing hope for mothers in these difficult situations. In 2012, a collection of stories from The Lancet [12] found pregnant women do not need to have an abortion to get treatment for cancer. Similarly, a 2015 study in the New England  [13]Journal of Medicine [13] found chemotherapy may not impair unborn babies’ general development.