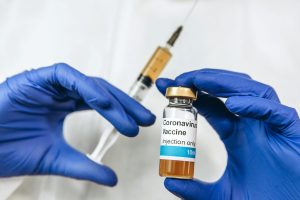 The race is on to develop a vaccine for Covid-19. More than 140 vaccines [10] are being tested around the world, according to the World Health Organisation. In Australia alone at least half a dozen vaccines are being trialled.

At the same time, the WHO and various experts keep warning us that, even with a vaccine [11], the coronavirus will remain a threat and that we must adapt our habits accordingly. Among other things, they are worried about community take-up of anti-Covid vaccines as they become available – whenever that is.

Mistrust of vaccination has grown in recent years. In his bizarre announcement of a bid for the US presidency, rapper Kanye West appealed to anti-vaccine sentiment [12], saying vaccines are “a mark of the beast” and are among the things that “make God mad”.

A recent YouGov survey found that one in six UK respondents indicated they “definitely” or “probably would not” get vaccinated if a coronavirus vaccine became available. A further sixth of respondents to the survey were unsure what they would do. “Worryingly, this means up to a third of UK people could turn down a coronavirus vaccine,” writes [13] an Australian academic.

She continues: “But there are many reasons why people might reject vaccines. Research has found that people with a fear of needles [14], low tolerance to perceived impingement of freedoms [15] or belief in conspiracy theories [16] are more likely to have anti-vaccine attitudes.”

One reason she does not mention is that some essential vaccines have been developed from the cells of aborted foetuses. This is not the only or even the main reason for the “anti-vaxxer” movement, although it may be the reason for Kanye West’s attack.

The link between abortion and some vaccines is real

For years, opponents of abortion were dismissed as crazy scaremongers for advancing this objection to vaccines. But in 2013 their concerns were acknowledged [17] by the editors of the leading science journal, Nature, following a scandal over another cell line, HeLa, derived from the cancerous cervical cells of a woman named Henrietta Lacks in 1951.

The journal helpfully provided a history of the fetal cell line WI-38 [18], which has been the focus of contention for decades.

From this article we learn that in 1962 a Swedish woman had a legal abortion at four months because she did not want another child. The lungs of the fetus were removed and sent to the Wistar Institute for Anatomy and Biology in Philadelphia where they were processed and cultured by Leonard Hayflick. WI-38 was distributed to drug companies and researchers around the world and used to create vaccines for rubella, rabies, adenovirus, polio, measles, chickenpox and shingles.

The leading issue with both HeLa and WI-38, as far as Nature’s editors were concerned, was the absence of the women’s consent, which was certainly unethical. However, pro-life objections concern primarily the injustice of abortion and the question of moral complicity in a particular abortion through acquiring foetal tissue, using it to make a product, and administering or receiving vaccines derived from it.

Are some of vaccines now in development on that list of morally questionable therapies?

And just what does that mean for people with a conscientious objection to abortion?

According to a briefing paper [19] put out by the Anscombe Bioethics Centre (Oxford) in April, the answer to the first question is, yes. The author, Helen Watt, says:

“One such cell-line used in COVID-19 vaccine research (including a project of the University of Oxford5) is the HEK 293 cell-line modified from tissue taken from the kidney of an unborn child aborted probably in 1972, while another is the PER C6 cell-line from the retinal tissue of an 18-week baby aborted in 1985.”

Even people who do not object to abortion in general, Watt points out, may object to a late-term abortion like that used for the PER C6 cell line. In any case drug companies and researchers are aware by now of such objections and should take them into account.

In the US, new research using fetal tissue is effectively banned. In June last year the Health and Human Services Department (HHS) issued a statement which includes the following principle: “Promoting the dignity of human life from conception to natural death is one of the very top priorities of President Trump’s administration.”

However, this is keeping a leading researcher, Kim Hasenkrug [20], from using “humanised” mice to test potential therapies. These mice have human-like lungs with tissue derived from aborted human fetuses.

Democrats in the House of Representatives have attacked the ban. In a letter to Health and Human Services Secretary Alex Azar in April, they wrote [21]: “Because of your restrictions, NIH is unable to utilize human fetal tissue to develop animal models of COVID-19 that can test potential vaccines and treatments to decelerate or even end this global health crisis. This inaction may ultimately put Americans further at risk of disease or death from COVID-19. “

Republicans in the House [22] and Senate [23] rubbished these claims, pointing to the dozens of Covid-19 treatments already being investigated [24] without the use of fetal cells. In the Anscombe briefing Helen Watt mentions such ethically uncontentious sources as insects [25], tobacco plants [26], and hamster ovaries [25]. One Australian trial is adapting the BCG vaccine [27], which was designed to protect against tuberculosis and has been around for 100 years – well before permissive attitudes to abortion made fetal tissue possible as a medium.

Chances are, then, that vaccines will be available which are not tainted by abortion. But what if you are a conscientious objector and your government decides to buy the one that is? This a question particularly in welfare states like New Zealand where governments fund the bulk of healthcare; and particularly, should a government try to make vaccination compulsory [28].

The Anscombe briefing is very helpful here, providing an ethical framework for those involved in any way with the provision or reception of such vaccines and aware of their origin.

It begins by pointing out: “There is a chain of actions from the original abortion and harvesting of fetal tissue, to the creation of a fetal cell-line, to its use in the creation of a vaccine, to the vaccine’s marketing and purchase, and offer to and use by members of the public. Is complicity involved at every stage, and if so, to what extent?”

The original act is ‘deeply immoral’

The original collection, involving arrangements between the scientist and the abortionist (with possibly an agent in between) for the cells of a particular baby, is deeply immoral. The scientist’s needs will dictate the precise way in which the abortion is done (as described, for example, in the 2015 undercover videos [29] of an interview with a Planned Parenthood medical director) and using a go-between cannot sanitise his actions.

Such arrangements could encourage more abortions. They could make a woman who is ambivalent feel better about going ahead, because something good might come of it, and yet create subsequent conflicts for her.

“After the event, the knowledge that tissue was taken from her child with her consent will complicate her thoughts and feelings about the abortion: any grief, pain and guilt she experiences may be even harder to process and resolve.”

What if the cells were created long ago?

More morally complex is the use of cell lines already created, perhaps long ago.

“The more pairs of hands that separate us from the original wrongdoers, and the less we are part of an organised system, the less scandalous the messages we send out and the more likely it is that our actions are defensible. However, these actions are, conversely, less likely to be defensible if the wrongs in question, as with abortion and foetal tissue harvesting, not only continue to the present day, but continue with some degree of social sanction.”

It may be possible that a scientist does not know the provenance of a particular cell line. However, it is difficult to plead ignorance once a controversy about it has developed (and the pro-life movement can be counted on to create that controversy). Using the cells under these circumstances is a serious moral issue and can convey approval and encourage continuing fetal tissue experiment.

Conversely, there is an opportunity (and a moral obligation) to discontinue use and promote alternative research: “One scientist [30] who formerly used an embryonic stem cell-line obtained from another institution led his laboratory colleagues to conclude that the end (scientific discoveries from embryonic stem cell research) must justify the means (destruction of IVF embryos).”

Though objections to fetal tissue research are not limited to religious people, religious people tend to be more sensitive to the morality. A 1995 Vatican document, Dignitatis Personae (The Dignity of Persons), is the most authoritative statement of the Catholic Church’s position. It says that scientists have a duty to refuse the use of illicitly-produced material “even when there is no close connection between the researcher and the actions of those who performed the artificial fertilization or the abortion”.

This duty, it claims, “springs from the necessity to remove oneself, within the area of one’s own research, from a gravely unjust legal situation and to affirm with clarity the value of human life.”

However, the document states that “within this general picture there exist differing degrees of responsibility. Grave reasons may be morally proportionate to justify the use of such “biological material”, reasons relating to the health of children, for example.

“Thus, … danger to the health of children could permit parents to use a vaccine which was developed using cell lines of illicit origin, while keeping in mind that everyone has the duty to make known their disagreement and to ask that their healthcare system make other types of vaccines available. Moreover, in organizations where cell lines of illicit origin are being utilized, the responsibility of those who make the decision to use them is not the same as that of those who have no voice in such a decision.”

Watt discusses protesting a morally fraught vaccine by refusing to use it:

“Boycotting a COVID-19 vaccine in the absence of an alternative is a serious action that should be carefully considered, because of its potentially grave risks both for the person and for others. These risks will in turn depend on such factors as the person’s state of health and family and work circumstances and the presence of the virus (or immunity to the virus) in the community in which he or she lives.

This is especially applicable to Covid-19. But, if truly ethical alternatives for vaccination against this virus are available, those who can access them “without excessive difficulty” have a moral duty to do so, “as a witness to the value of human life and life-respecting research.”

“If an alternative is not reasonably available, some will decide, under protest, that they have grave reasons (in the words of Dignitas Personae) to accept a vaccine out of concern for their own health and the health of others they may infect. Such individuals should make their views on use of foetal cell-lines known to the health authorities, as Dignitas Personae urges, in the hope of raising awareness and helping to change the brutal culture in which abortion products are so widely used.”

In other words, boycotting unethical vaccines is a matter for the individual conscience, and “some will feel, whether rightly or wrongly, called to a boycott even if no alternative vaccine is available to them.”

However, governments should seek to fund research on vaccines that do not depend on the killing of human beings, and to purchase them.

That is something for pro-life people everywhere to add to discussions about Covid-19 research, in the hope that, in the words of Helen Watt, “morally uncontentious vaccines will be made widely available to all peoples of the world, both to fight the COVID-19 pandemic and to combat other threats to life and health.”