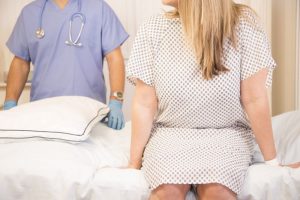 [9]In discussing female contraception, the general assumption is that you’re talking about the Pill. But new findings released by the Centers for Disease Control and Prevention (CDC) show that another method has surpassed oral contraceptives in popularity: female sterilization.

According to the data [10], which was released Wednesday and gathered between 2015 and 2017, nearly 65 percent of the 5,500 women aged 15 to 49 who participated in the survey said they had used some form of contraception in the month before they were interviewed. The most common methods used were female sterilization (18.6 percent), oral contraceptives (12.6 percent), long-acting reversible contraceptives [11] (LARCs), such as intrauterine contraceptives (10.3 percent), and male condoms (8.7 percent).

The last time the survey was conducted (between 2011 and 2015), only 14 percent of women reported they were relying on female sterilization, i.e. tubal ligation, a surgical procedure in which the fallopian tubes are closed to prevent future pregnancies. Today, more women are opting for this method, the older they get. About 4 percent of women between the ages of 20 and 29 choose this method, compared to nearly 22 percent of 30- to 39-year-olds, and 39 percent of 40- to 49-year-olds. The researchers also found that rates of female sterilization declined and the use of the Pill increased with higher education.

Jessica Shepherd [15], M.D., a minimally invasive gynecologist in Texas, tells Yahoo Lifestyle that the numbers are “shocking, given that this is a permanent procedure.”

The procedure comes with some risks. One is an increased risk of ectopic pregnancy (where the fetus develops outside the uterus), which can be life-threatening for a woman, Wider says. “Other side effects include cramping and bleeding,” she adds. Given that this also involves surgery, there are risks of complications, including chronic pain and even death, Christine Greves, MD, a board-certified ob-gyn at the Winnie Palmer Hospital for Women and Babies, tells Yahoo Lifestyle. “Some people also complain that their periods aren’t as nicely controlled after a tubal ligation, but they often were using a hormonal method of birth control beforehand, which makes your periods a lot better,” Greves says.

Clearly, this isn’t a hugely popular choice among younger women, but it’s an important one for some. Life coach and hypnotherapist Bri Seeley [16] tells Yahoo Lifestyle that she’s “known pretty much my entire life that I don’t want to be a mom. I feel like it’s just part of who I am.” After being on birth control for years, Seeley asked her doctor about getting a tubal ligation when she was 24, and her request was denied. Even though she repeatedly asked, her doctor wouldn’t even give her a referral to have someone perform the procedure on her until she was 30, which Seeley says was hard to take.

“It was frustrating because I know myself. To have someone tell me that I don’t know myself well enough to make this decision was super-frustrating,” Seeley tells Yahoo Lifestyle. Seeley ended up finding a doctor herself and had the procedure done six years ago [17]. “I went from being worried about getting pregnant all the time to now it’s something that hasn’t crossed my mind over the last six years other than ‘Thank God,’” she says. “I’ve seen female friends have to fight to get birth control, and I always think, ‘Thank God I don’t.’”

“I’ve seen this quite a bit for women in their 20s who have had children earlier in life — after their third or fourth child, they may ask for a tubal ligation,” Greves says. But Greves says she’s also seen women like Seeley who know they don’t want to have children and request a tubal ligation. Shepherd has too. “Some people will say, ‘I do not want kids ever,’ but we always go back to the LARC when they say that, because we want to give them the option to change their mind,” she says. Research has shown that there is a high percentage of women who regret having had the procedure done if they decided to do it before they were 30, she says, and doctors are well aware of that. “You’ll have people who say, ‘I’m so sure that I don’t want kids anymore,’ and later get into a relationship or get married and regret their decision,” Shepherd says.