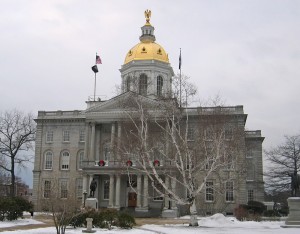 [8]Concord, NH (LifeNews.com [9]) — The New Hampshire House of Representatives defeat a bill on Wednesday that would have made the state the fourth to legalize assisted suicide. Oregon, Washington and Montana already allow the practice and the New Hampshire bill would have targeted the elderly and terminally ill as well.

The House voted 242-113 against the measure, which would have allowed physicians to dispense lethal drugs to patients to use to kill themselves.

The vote came after a majority of the members of the House Judiciary Committee recommended [10] the state House kill the bill. Some lawmakers wanted to send the legislation back to the panel for more study but a majority decided to defeat the measure.

Alex Schadenberg, the head of the Euthanasia Prevention Coalition, told LifeNews.com today that Margaret Dore and members of the coalition worked hard to defeat the legislation.

“This vote proves that assisted suicide is a recipe for elder abuse and Choice is a Lie,” he said.

The language of the bill could have turned the Granite State into a suicide haven because the measure, HB 304 [11] by Representative Charles Weed, would not only have allowed assisted suicide but would have gone further by making it so a terminally ill patient need not be actually suffering serious symptoms to qualify for assisted suicide.

Rep. Nancy Elliott, a member of the committee opposed to assisted suicide, told AP after the committee vote, “It’s not the function of government to encourage suicide in the young or the old. It’s a prescription for elder abuse.”

Supporters of assisted suicide opposed the bill because it did not take into account current laws and needed more safeguards before moving forward. They promised to bring back another bill with them.

Bioethics attorney Wesley J. Smith criticized the bill when it was introduced and said it would make it so a terminally ill patient need not be actually suffering serious symptoms to qualify for assisted suicide.

“Assisted suicide advocates are cultural imperialists who, as they pretend they only want a ‘limited’ change in law and culture, actually seek to widen and expand the euthanasia/assisted suicide license through the use of loose definitions and broadly worded ‘restrictions,” he said.

The Weed measure said a “qualified patient” for assisted suicide “means a capable adult who us a resident of New Hampshire or is a patient regularly treated in a New Hampshire health care facility.”

That opens the door to residents of new England states to drive to New Hampshire to kill themselves under the law.

“This would generally spread assisted suicide access to citizens of Massachusetts, Vermont and Maine,” Smith explained. “But it also at means people from all over the country could easily qualify for assisted suicide by traveling to New Hampshire for treatment, then obtain the prescription, and go home.”

“Usually, state laws and proposals require that patients asking for assisted suicide be residents,” he noted.

Kevin Smith of the conservative Cornerstone Policy Research and Bob Dunn, spokesman for the Catholic Diocese of Manchester, also strongly opposed the bill.