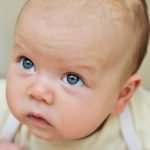 A newly-born baby boy was rescued by a Catholic church employee on Wednesday shortly before mass at the Cathedral of St. Paul in St. Paul, Minnesota, Fox9 News reports.

“I am profoundly grateful that this beautiful baby is healthy and safe and whomever dropped him off at the Cathedral felt that this was a safe place where he would receive the care he needs and deserves as a child of God.” Father John Ubel, leader of the cathedral, told local media.

The baby had been wrapped in a green fleece blanket and left in a plastic laundry basket in a hallway of the church, Fox9 News reported. His faint cries alerted a church employee to investigate the basket. The baby was subsequently transferred to the local children’s hospital, and will be released to country child welfare officials following his hospitalization.

While waiting for the police to arrive at the church, the child was christened “Nathan John” by the local congregation and baptized, according to the report.

Unfortunately, there is no database or organization tracking the number of babies surrendered via Safe Haven laws, according to Fusion. These laws allow parents who feel they cannot care for a newborn to leave the baby at a police station, fire house or hospital without fear of recourse.

However, grassroots activists and other volunteers estimate 3,000 babies have been saved since the inception of the law in Texas in 1999, which has since been ratified in varying forms in each of the remaining 49 states.

Indiana recently developed the concept of “baby boxes” where mothers can anonymously drop off their newborn children in approved locations at local fire stations as an extension of the already existing Safe Haven laws, according to NBC News. The boxes include protection from the climate and the surroundings, and allow the mother the opportunity to uphold the law without having direct conversation with emergency, hospital or law enforcement personnel.

The St. Paul Police state that no crime was committed in leaving the child at the cathedral, despite it not being a traditional drop off site under Minnesota’s Safe Haven laws, according to Fox9 News.

Furthermore, the St. Paul Police used the situation to remind and encourage parents to call 911 or go to the local hospital if there are any concerns with the ability to care for the welfare of their children.