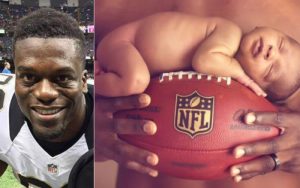 As a husband and father of seven children (two currently in the womb), the NFL star explained that men should “step up and lead,” which could “eradicate” many of the abortions occurring today.

He added that abortion is “the ultimate form of sexism against women.”

Check out the powerful interview below:

“I look in the mirror and encourage myself as a husband and father…If men stood up…a lot of this would be eradicated.”

Watson explained that “men are in a role of leadership in many areas. Men are protectors—we are providers. Many women would not be seeking abortions if the men involved in their lives were doing what they’re supposed to be doing.

“My message to men is a lot of times, me looking in the mirror and encouraging myself as a father, as a husband, to do what it takes to stand in the gap, to step out, and to lead, because manhood is really falling by the wayside.

“The crazy thing is that abortion itself is really the ultimate form of sexism against women. And if men were standing up doing what they were supposed to do, much of this would be eradicated.”

Watson also presented a similar message at the 2017 March for Life:

What do you think of Watson’s message?