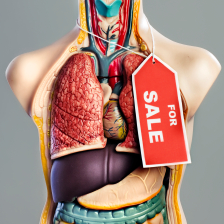 [7]Recent news reports of responses in persons declared “brain dead” should have alerted everyone that “brain death” is not true death. These observed responses prevented the organ transplantation protocols from going further. Zack Dunlap later reported how he could hear discussions of his death, but he could not respond at that time. Val Thomas had flat brain waves for 17 hours before her response was observed. While these might be of only passing interest to many, it ought to be of grave concern to every citizen of the United States of America, and the rest of the world.

We are continually bombarded with ads to be an organ donor. We are told that we are giving the “gift of life” in organ donation. We are led to believe that organs are taken for transplantation after true death, i.e., after the heart and circulation stops and there is no known way to restore them. We are seldom, if ever, made aware that after true death the heart, liver, and other vital organs are not suitable for transplantation.

True death is when the soul separates from the body. Certainly when the person is living, the soul has not separated from the body. The heart, liver and other vital organs are suitable for transplantation only when there is circulation and respiration albeit supported by a ventilator. After true death the ventilator cannot support circulation and respiration. After true death vital organs cannot be transplanted from a corpse.

The Federal Government is much involved with obtaining organs for transplantation. During the Clinton Presidency the Secretary of Health issued an edict that when death is imminent all medical records must be sent to the Organ Procurement Organization (OPO) to determine suitability for transplantation. The secretary’s edict has been updated and placed into Statute within the HIPAA Regulations (The Health Insurance Portability and Accountability Act of 1996). While many believe that HIPAA Regulations protect your privacy, there is a list of 14 reasons why the Federal Government can obtain and use your medical information without your permission. Organ donation is one of them.

If the OPO determines that your organs are suitable, a “designated requestor” is sent to the hospital to seek permission from relatives, close friends or a government official. This is done under the Uniform Anatomical Gift Act (UAGA) that was passed in all 50 States in 1968. The Revised UAGA of 2006 has already been placed into Statute in 30 states, and has been introduced in 10 more states just this year. This current Revised Act makes everyone a “prospective donor,” meaning it is presumed that you intend to be an organ donor unless you have signed a refusal.

Whenever attempts are made to add or delete words from an existing statute, someone has a reason for doing so. Previously the UAGA required you to be “of sound mind” to be an organ donor. That requirement has been removed. A person who gives any sort of medical or legal consent to anything ought to be “of sound mind” in order for the consent to be valid. So, why drop “sound mind” from the existing statute? Could it be that the drafters of the Revised UAGA are concerned that a person under the influence of sedatives, or with a brain injury, might not be considered to be of sound mind, yet they still want to be able to get his/her signature or verbal consent to organ donation?

The revised UAGA empowers 15 ½ year old persons (in some states, 14 year old persons) to sign to be an organ donor when they apply for a learner’s permit to drive. This is a time when a teenager might be easily intimidated. Parents can override a minor child’s refusal to be a donor prior to age 18. What is the purpose of permitting a child to sign or refuse to give an anatomical gift if it can be overridden? What does it mean “if a parent is reasonably available?” Do you think the search for a parent will be as diligent when a child has consented to be a donor as the search for a parent of a child who has refused to be a donor?

The Revised UAGA’s Section 8 recognizes that some decisions of a donor are inherently ambiguous, making it appropriate to adopt rules that favor the making of anatomical gifts. Thus, the Revised Act clarifies to facilitate and insure that suitable organs are obtained. For example, a donor’s revocation of a gift of a body part is not to be construed as a refusal for others to make gifts of other body parts. Likewise, a donor’s gift of one part is not to be construed as a refusal that would bar others from making gifts of other parts from that same patient, absent an express, contrary intent. Section 8 is designed to firmly state the rule that a donor’s autonomous decision regarding the making of an anatomical gift is to be honored and implemented and is not subject to change by others. Section 8 not only continues the policy of making lifetime donations irrevocable but also is restated to take away from families the power, right, or authority to consent to, amend, or revoke anatomical donations made by donors during their lifetimes (even though alert, fully informed relatives might make a different decision).

The Revised UAGA sets forth a prioritized list of classes of persons who can make an anatomical gift of a decedent’s body or body part if the decedent was neither a donor nor had signed a refusal. The list is more expansive than under previous versions of this Act. It includes persons acting as agents at the decedent’s death, “adult grandchildren, and close friends.” It goes through a descending class of persons to give permission, proceeding from one class to the next by going through those “reasonably available.” As stated in the revised Act, “Reasonably available means able to be contacted by a procurement organization without undue effort.” Undue effort is not defined; could it mean not getting a response to a telephone call is sufficient to go to the next class of persons?

The revised Act has language that does not protect the life of the prospective donor and does not benefit ordinary citizens. For instance, does this bill not discriminate by looking so hard at facilitating the obtaining of organs for transplantation, that it overrides the fully and explicitly informed consent of the donor? Then there is the word “surviving” used to describe the “decedent’s” relatives who can make an anatomical gift on behalf of the “decedent” after the so-called “decedent’s” so-called “death.” This is ludicrous, since a dead relative, to state the obvious, could not be “reasonably available.”

In the Revised Act, what are “measures necessary to ensure the medical suitability of an organ for transplantation or therapy”? I am concerned about this because the bill states that “unless the donor’s declaration (living will) expressly provides for the contrary,” the proposed law “prohibits” these measures from being withheld or withdrawn from a prospective donor. A “prospective donor,” according to this bill, may be someone who is “near death” and yet the organ procurement medical team can initiate measures that may actually do harm to the still living potential donor — such as increasing fluids to a head-injured patient, administering heparin and Regitine, etc., in order to “ensure the medical suitability of an organ.” It is absolutely appalling to think that once a person is identified as a potential donor, organs for transplant become more important than the person to whom they belong!

The Revised Act states that a revocation of an anatomical gift “does not equal a refusal.” So, if you change your mind, you not only have to revoke your prior anatomical gift, but also issue a formal refusal. Isn’t this close to an opt-out or presumed consent system? Such a system presumes fulfillment of all legal requirements for consent to take organs unless a person has opted out by a formal witnessed documentation of refusal. Eight European countries have such a presumed consent, opt-out system. Such a bill has been introduced in Delaware; it has not been acted upon as yet.

In some States the Revised Act requires that “The anatomical gift must be renewed upon renewal of each [driver’s] license . . . but when a license expires and is not renewed, the anatomical gift does not expire.”

Organs for transplantation are primarily obtained from those declared “brain dead.” This is labeled as DBD. These are patients who have disease or injury to their brain manifested by altered functioning of their brain. They typically have a beating heart, normal blood pressure, respiration supported by a ventilator, and they move and squirm when cut into without first being administered a paralyzing drug or an anesthetic.

The Harvard Criteria (on brain death) was published in 1968. Thirty more disparate sets of criteria were published by 1978; there have been many more published since. There is no general agreement or consensus as to which set of criteria to use to declare a person “brain dead.” Consequently, a person could be dead by one set, but not fulfill other sets, thus they are living! Every set includes an Apnea Test. This test is done by taking away the life-supporting ventilator for up to 10 minutes. This is medical strangulation. The patient can only get worse with this test. This test is commonly done without requesting permission. If this isn’t enough to draw attention, when a patient does not fulfill any of these differing brain related criteria, but the desire is to get the organs, a Do-Not-Resuscitate order (DNR) is obtained. Then the ventilator, i.e., life support, is removed. When the patient is without a pulse (but not without a heart beat) for 2-5 minutes, this becomes the signal to take the organs. This is labeled Death by Cardiac Death (DCD).

Yes, much is being done to get your organs. For an organ to be suitable for transplantation, it must be healthy and it must come from a living person. Please wake up! Organ excision does not benefit the person from whom the organs are taken, it causes their death!

Dr. Byrne is past-President of the Catholic Medical Association (USA), formerly Clinical Professor of Pediatrics at Creighton University School of Medicine in Omaha, NE, and at St. Louis University School of Medicine in St. Louis, MO. He is author and producer of the film “Continuum of Life” and author of the books “Life, Life Support and Death,” “Beyond Brain Death,” and “Brain Death Is Not Death.”

Dr. Byrne has presented testimony on “life issues” to eight state legislatures beginning in 1967. He opposed Dr. Kevorkian on the television program “Cross-Fire.” He has been interviewed on Good Morning America, public television in Japan and participated in the British Broadcasting Corporation Documentary “Are the Donors Really Dead?” Dr. Byrne has authored articles against euthanasia, abortion, and “brain death” in medical journals, law literature and lay press.

Paul was married to Shirley for forty-eight years until she entered her eternal reward on Christmas 2005. They are the proud parents of twelve children and grandparents of twenty-six grandchildren.