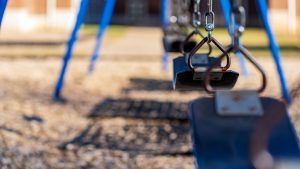 [9]Many millennials and gen-z-ers never had the experience of “going out to play” in generally safe neighborhoods without constant parental supervision. High divorce rates and the rising influence of the Internet deprived them of this particularly formative part of their childhoods. Their schools reinforced the idea of constant supervision by an education philosophy that is long on ideology and short on truth.

Not only do the newer generations have difficulty going out to play but they have fewer playmates. Fewer couples are having children. Statista [10] relates that 49.5 million families in the U.S have no children under the age of eighteen, 14 million have a single child, 12.8 million have two children, and only 7 million have three or more. While these figures do not reflect homes where children are grown, the trend is undeniable. Children are vanishing in America.

The fertility rate in the United States has been on a steady decline since 2007. It is now at an all-time low. According to a report from the Centers for Disease Control’s National Vital Statistics System [11], “The general fertility rate was 59.0 births per 1,000 women aged 15–44, down 2% from 2017 and another record low for the United States.”

The Hill [12] presented the overall picture as it rolled out over time. “[T]he TFR (Total Fertility Rate) hovered above 3.0 in the early twentieth century; declined to replacement levels of about 2.1 in the 1940s; reached a peak of 3.7 in the post-World War II baby boom; and then declined rapidly to relatively stable low levels in the seventies. Declines in fertility have accelerated since 2010 — raising questions about the economic and public policy implications if this latest trend continues.” The Washington Post [13] pegs the current fertility rate at 1.73.

Reasons for the Decline

The reasons for this decline are well-known. Contraception is more common and available everywhere. Couples wait longer to get married, and then delay childbearing until they consider themselves more financially secure. The costs of raising children – especially daycare and education – continue to rise faster than the general cost of living. Many couples simply decide never to have children.

The influence of culture and government also contributes to this trend. Many schools and other public agencies promote contraception and abortion among the young. Such efforts are often done in tandem with Planned Parenthood. Under Obamacare, contraception drugs are mandated for all health insurance packages. The United Nation’s World Health Organization actively promotes abortion and contraception worldwide. Much of the environmental movement [14] favors fewer people since the mere existence of humanity is the source of the coming global collapse.

This depopulation trend has massive social and economic consequences.

Children and the Family

Neighborhoods that once crawled with children are now relatively quiet. Rather than neighborhood games of tag, baseball, or other games, which could go on for hours, the now-common “playdate” is more likely to be indoors and have a set end time. The playdate is tailored to the dwindling number of children that now must play by appointment only.

The playdate is a poor substitute for the neighborhood. The limits on the parents’ time make these occasions relatively rare, which makes forming lasting friendships more difficult. The pool of children is limited and thus makes it more difficult to develop social skills with groups that should develop naturally.

When the playdate has to be called off or postponed, the most available alternative is “screen time.” That screen might be attached to a television, a computer or a video game, which is a poor replacement for human interaction.

Can A Shrinking Society Support Itself?

Most couples who delay or limit childbirth cite economic reasons. They may not realize that a shrinking society carries severe economic costs.

Euromonitor International [15] reported on the global impact of an aging consumer base. Its study is ominously titled Developed Cities with Lower Birth Rates Forecast to Register Slower Real GDP Growth by 2030. The report finds that “While new opportunities will certainly arise in light of a growing elderly demographic,… continuously low birth rates will inevitably lead to a drop in total consumption in the future as overall population will begin to decrease.”

Euromonitor also reported on the negative impact of a decreased number of workers. “The shrinkage of the working-age (15-64) population is the single biggest danger for the economic health of cities. This age category is the main supplier of productive labour for businesses, which means the working-aged are also the taxpayers and the care providers for the age-dependent.”

Boston College’s Center for Retirement Research [16] also described this impact in March 2019. “[L]ower fertility has serious consequences:  a smaller future workforce will result in slower overall economic growth and higher tax burdens to support pay-as-you-go programs such as Social Security.  According to the 2018 Social Security Trustees Report, a total fertility rate of 1.8 children per woman instead of 2.0 would increase the program’s 75-year deficit by 0.41 percent of taxable payrolls or a present value of almost $2 trillion.”

Eventually, the Social Security System may collapse or be restructured as a taxpayer-subsidized welfare program. Of course, there will be fewer taxpayers.

European and Asian Situations Are Even Worse

While American population trends are troubling, the situation is far worse in Western Europe and parts of Asia. Figures compiled by The World Bank [17] find that no European Union nation hits the population replacing 2.0 fertility rates. Malta’s rate is lowest at 1.2. Cypress, Italy and Spain are at 1.3. France is the highest at 1.9.

Japan has not replenished its population since 1975 and currently sits at slightly under 1.4, according to the website Macrotrends [18]. Even the liberal New York Times [19] acknowledges that China’s low birth rate has “undesirable side effects” stemming from its tyrannical thirty-five year “One Child Policy” that was slightly changed in 2015. “It upended traditional structures for supporting older adults and led to a widening imbalance in the number of men and women, one that could sow social unrest.”

Indeed, the present generations are too selfish to reproduce.  Like most selfish behavior, it is short-sighted. Individuals and families think they are short-term advantages to having small families. However, these “advantages” will come to haunt them as they age and the smaller generations that follow struggle to keep society running.