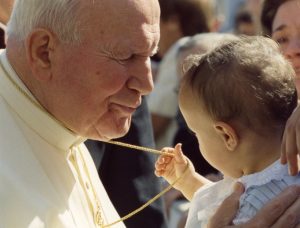 [8]Pope John Paul II was born Karol Wojtyla, a man from a small town in Poland who lost all of his immediate family — mother, older brother, an infant sister and father — by the time he was 20 years old. Shortly thereafter, he vowed a life of celibacy as a Catholic priest. And yet Wojtyla would go on to be remembered as the “Pope of the Family [9].”

Twenty-five years ago next week, on Feb. 2, 1994, Pope John Paul II penned his “Letter to Families, [10]” the subject of which was spurred by the United Nations’ declaration that 1994 would be the “Year of the Family.”

At the time, U.S. divorce rates were higher — about 4.6 per 1,000 people, compared with 2.9 in 2017. But marriage rates were also higher: 9.1 compared with 6.9 for those same years. Legalized same-sex “marriage” was still considered a taboo political idea and would remain so for more than a decade. And Bruce Jenner still went by Bruce Jenner.

But even though it was written 25 years ago, many Catholics in family-life ministries believe that the Church is only beginning to see the fruits of John Paul II’s message to families.

Although he was a celibate priest, Father Wojtyla became very close to a circle of young people whom he pastored while serving as chaplain to university students in Krakow. As they married and had children, Father Wojtyla offered spiritual and pastoral guidance to their families that would inform his work well into his years as Pope John Paul II.

“He was able to support these young families, to help them live the faith at a time when communist society was really trying to undermine the family,” said Jared Staudt [11], who is the director of formation for the Archdiocese of Denver, where he also leads “Building Family Culture” retreats for families.

When the Communist Party ruled Poland, family work and school schedules were arranged in such a way that they spent as little time together as possible. The state, and not the family, was, according to the government, the ultimate good and end of society.

“So he was in this battle for family life very directly in Communist Poland,” he said of Father Wojtyla.

Much of what Father Wojtyla came to know about the sanctity and importance of marriage and family life can be found in his 1994 “Letter to Families.”

Man, Woman and Child: The Family as Vocation

John Paul II wrote prolifically on the family, but this letter is one of his more personal and concise works, detailing much of his thought on marriage and family.

He was known for elevating the idea of the vocation of marriage and family life to a level that had not yet been articulated in the Catholic Church.

“What John Paul did is he truly identified the family as the pathway to holiness,” Bollman said. “In this letter, it’s the family that’s placed at the heart of the great struggle between good and evil, between life and death, between love and all that’s opposed to love.”

In his letter, John Paul II wrote that men and women, particularly in their roles as fathers and mothers in the family, are key to building up a “civilization of love,” in which families are able to give and receive love at individual and societal levels.

Bollman said that by telling families that they were at the heart of the Church, it called them to holiness in a way that hadn’t yet been articulated.

“The vast majority of people become holy as a husband and father and wife and mother, not in spite of that,” Bollman said. John Paul II’s teachings on the family are at the foundation of Bollman’s work at Paradisus Dei [12], which includes a couple’s ministry and “That Man Is You,” a ministry for men that particularly focuses on their roles as husbands and fathers.

“Our tagline is ‘Helping families discover the superabundance of God.’ That’s what we are: We’re all about family and finding God within the family,” he said.

Cultural Attacks on the Family

Staudt called John Paul II’s letter “prophetic” because it addresses not only the crucial importance of the family’s place in society, but some of the key ways it is under attack.

And if attacks on the family were urgent in 1994, they are all the more so today, Staudt said.

“John Paul’s famous line from the letter — ‘The history of mankind, the history of salvation, passes by way of the family’ — is actually chilling, at this point,” Staudt noted, “because what we’re seeing is that we don’t have hope for the future [as a society]; we’re not investing for the future of society or for the Church. We’re just living for the present moment for our own selfish desires. So I think John Paul was already recognizing that the foundation of society itself is already in jeopardy, if people are not getting married, if they’re not having kids, they’re saying No to the future.”

According to Pew Research Center, the marriage rate in the United States is currently hovering at around 50%, meaning half of U.S. adults aged 18 and older are married, a steep decline compared to the peak rate of 72% in 1960. The fertility rate [13]is also at a 30-year low in the United States and sits below replacement levels. As of 2014, less than half of children [14] were living in a traditional nuclear home with their married mother and father.

By many measures, marriage and family life today are in crisis, in ways that are perhaps even more pronounced than when John Paul II wrote this letter.

“I think the ‘crisis of concepts’ that John Paul II speaks of is an enormous challenge for the family today,” Sister John Mary, of the Sisters of Life, told CNA.

“Who can deny that our age is one marked by a great crisis, which appears above all as a profound ‘crisis of truth?’” John Paul II wrote. “A crisis of truth means, in the first place, a crisis of concepts. Do the words ‘love,’ ‘freedom,’ ‘sincere gift’ and even ‘person’ and ‘rights of the person’ really convey their essential meaning?” This crisis now seems to be even more profound than when the Pope first wrote these words, Sister John Mary said.

“Even more so today than when the ‘Letter to Families’ was written, modern culture does not recognize the truth of who the human person is, what we are made for, what constitutes a family, what freedom and human rights are,” she said. “So to truly live Christian family life becomes more and more radically countercultural. John Paul II addresses this in the letter by proposing the anthropology that corrects this crisis of concepts and allows for a civilization of love to grow by way of marriage and family,” she noted.

Another major challenge faced by families is the “radical individualism” present in current culture, Sister John Mary said, which is something else John Paul II addressed in the letter.

According to John Paul II, radical individualism is “based on a faulty notion of freedom and proposes personalism as the antidote,” Sister John Mary said. “The family is the first place where love is given and received. But if parents do not model authentic, self-giving love to their children, families become groups of persons pursuing their own selfish ends.”

Papal Cure for a Sick Society

Though John Paul II’s descriptions of these crises and the current state of affairs of marriage and family in the world paint a dark picture, John Paul also provides families and the Church a way out.

Bill Donaghy is a senior lecturer and content specialist with the Theology of the Body Institute [15]. The mission of the institute is to educate and train men and women to understand, live and promote John Paul II’s teachings in his theology of the body catechesis.

Donaghy told CNA that not only does he consider John Paul II’s “Letter to Families” the blueprint on how to live a holy life personally as a husband and father, he also considers it the “antidote” to everything that goes against a “civilization of love.”

“Without a doubt in my mind, in the providence of God, who could foresee today’s crisis in marriage and the family, the attempt to redefine marriage and the explosion of gender ideologies that detach our identity from our humanity, St. John Paul II’s thought is the antidote, the cure, the clear truth of who we are and how we are to live as human persons made by Love,” he said.

“I think the vision presented in this letter is actually more relevant now than it was 25 years ago,” he said. “It contains the secret for our joy, the mystical meaning of marriage, the way home for the prodigal sons and daughters who’ve tried everything else to bring joy and failed to find it.”

For himself, Donaghy said building the “civilization of love” starts in his own home — by treating his wife with love and respect, by spending time with and listening to his children and by modeling sacrificial love. At the parish level, he said the Church must help families by creating space for “real human interaction, conversation and formation.”

“Again, the ‘Letter to Families’ is a goldmine of a teaching, a school of love for humanity. But we’ve got to make time and space for it to enter into the everyday dynamics of our own family,” he said.

Staudt also told CNA that the words and teachings of Pope John Paul II on the family have deeply inspired his work in family ministry.

“It really is through John Paul’s teachings, the letter and his other teachings … that I’ve discerned that the way to build Christian culture is through family life,” Staudt, the father of six children, told CNA.

For the “Building Family Culture” retreats that he leads, Staudt said that he focuses on teaching families how to pray, the importance of which is heavily emphasized by John Paul II in his letter.

“Prayer must become the dominant element of the ‘Year of the Family’ in the Church: prayer by the family, prayer for the family and prayer with the family,” John Paul II wrote. “Prayer increases the strength and spiritual unity of the family, helping the family to partake of God’s own ‘strength.’”

“I think we take that for granted, that families know how to pray, and I don’t think they do. So I think that’s the foundation, that’s the core, and John Paul does talk a lot about that,” Staudt said. After prayer, he also focuses on how to build a family culture, which includes doing things that form children’s imagination in positive and beautiful ways.

Staudt said he hopes that more in family ministry “wake up” to the urgency of helping families become what John Paul II has called them to be.

“I don’t think enough people have woken up to the urgency in supporting family life and really making that a priority in their parishes, their dioceses, in catechesis, in evangelization,” he said.

“John Paul, I think, is truly prophetic in pointing us to the fundamental realities of man, woman, human love, family life as crucial for the Church and society at this time — that these are the key issues that we need to face.”

Sister John Mary and her fellow Sisters of Life say they help build a “civilization of love” through the women they help in crisis pregnancies, the women they counsel after abortions, or the young people who are early on in their journeys of faith.

“We are all called to do something great with our life and our love,” she added. “We are made for love and communion with God and others. John Paul II reminds us of this lofty call and encourages us that true love is possible.”