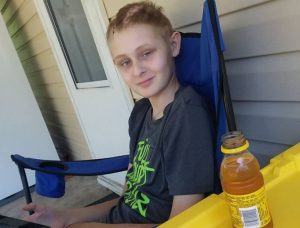 Like Jacob Marley, 13-year-old Trenton McKinley was dead. There is no doubt whatever about that. Or so the doctors said.

He had suffered seven skull fractures and traumatic brain injury in a freak vehicle accident last March. His mother reported [8] on Facebook that during emergency surgery he “died four times,” which, I presume, means he flat-lined; “one time,” she said, “for 15 minutes.”

After his heart’s final injection with epinephrine, “he had no brain waves,” including apparently from his brain stem. His eyes were dry and solid black. The doctors concluded — and [9] every [10] media [11] outlet [12] reported [13] — that the boy was “brain-dead.”

When doctors say a patient is “brain-dead,” they mean the patient has suffered the complete and irreversible loss of all brain function, including of the brain stem. The condition is called “whole brain death.”

Ever since the publication of the so-called Harvard brain-death definition [14] in 1968, clinicians the world over have taken brain death to mean human death; so that even if certain bodily functions continue, such as circulation and breathing aided by machines, the person, the living human being, John or Mary, is gone, and what remains is an elaborately functioning corpse the true state of which is being hidden by the effects of medical technology. These individuals are often even issued death certificates (see the case [15] of Jahi McMath).

The doctors were so certain of their diagnosis that his mother signed the paperwork to have his vital organs harvested for donation. Now to qualify for such donation, an individual must have died; this is the meaning of the “dead-donor rule” that prevails in the United States: Only corpses supply vital organs, although some [16] bioethicists [17] in recent decades have called for the lifting of the dead-donor rule.

If, therefore, Trenton’s body was a corpse, removing his heart, lungs, liver, etc. would have been no violation of human dignity. If, however, he were still alive, taking his vital organs would constitute homicide.

Happily, before his organs were harvested, Trenton began to exhibit signs of life: Brain activity resumed; his eye color returned; he regained consciousness, speech and mobility; they took him off the ventilator; and, finally, he went home.

It’s being called [18] a miracle. Perhaps. They certainly occur. But because this same report — “brain-dead” patient recovers consciousness — is increasingly common (see here [19], here [20] and here [21]), let’s doubt the miracle claim for the sake of argument and look at the situation empirically.

One may reasonably ask whether the boy ever was dead. For if he was, then he rose from the dead. But without a miraculous intervention, people do not, indeed cannot, rise from the dead. This is because death by definition is irreversible.

Death [22] is the definitive separation of the spiritual soul from the material body, not just a temporary separation, as seems to be the case in so-called “near-death” experiences. This causes the body to lose irretrievably the integrative functioning proper to a living organism. So the fact that a brain-dead individual wakes up means he was never dead to begin with.

Now, this implies one of two things: Either Trenton was brain-dead but brain death isn’t human death, and brain tissue can regenerate itself even when its entire living substrate is destroyed, and Trenton’s regenerated itself, so dramatically that he is now not only conscious but carrying out fine motor skills like playing [18] basketball; or Trenton was not brain-dead.

The second, it seems, has to be the case. Not because I am confident that all brain-dead individuals are humanly dead, or because I am a better diagnostician than his doctors, but because there is no evidence that brains can recover from total infarction (death).

Neurologists traditionally believed that damaged brain cells never regenerate; but recent studies [23] indicate that some cell regeneration does take place in the human brain, especially in younger persons (under 40 years of age). Moreover, it has long been known that neural tissue has a high degree of “plasticity [24],” which means when certain regions are destroyed, the functions associated with those regions are not necessarily lost; the brain can reroute the neural connections in such a way that those functions begin to be carried out by other regions.

But there is no evidence whatsoever, at least none to my knowledge, that any brain has ever recovered from total death. So Trenton must not have been brain-dead.

This raises an important educational point for all of us: Protocols (confirmatory tests) for diagnosing brain death can be [25] unreliable. Since there are clinical states that mimic brain death, such as certain neurological diseases and metabolic disorders, even a conscientious application of corroborating tests can render a false positive, as obviously happened with Trenton McKinley.

There are two lessons to take away from this:

First, when dealing with a loved one who may be brain-dead, make sure you get multiple corroborating opinions from doctors who are practiced in diagnosing brain death.

Second, make certain the doctors are asking the question of whole brain death. Some clinicians conclude that patients are brain-dead even when there is evidence, however minimal, of brain activity. These patients do not meet the criteria for brain death, and so do not fulfill the commonly accepted conditions for human death. And yet, as soon as they are defined as brain-dead, they become possible candidates for vital organ transplantation, which certainly will result in their deaths.

But there is one question left standing: Is brain death coextensive with human death? There is a lively debate among Catholic philosophers, scientists and clinicians about this. Some [26]ethicists are convinced that brain death is human death and that this has been officially taught by the Catholic Church.

But the doubters are many indeed and include faithful Catholic thinkers and clinicians, some quite eminent, such as Josef Seifert [27], Alan Shewmon [28], Robert Spaemann [29], Dominican Father Nicanor Austriaco [30], Alfonso Gómez-Lobo [31], David Albert Jones [32], Charles Camosy [26], Paul Byrne [33], Nancy Valko [34], etc. Each, after examining recent startling evidence suggesting that ventilated brain-dead individuals are living human beings — extremely disabled, to be sure, but not dead bodies — believe there are reasons for doubting [35] the now 50-year-old Harvard definition.

Doubts about the traditional rationale also exist among non-Catholics, some of whom don’t share a Christian view of the dignity of the human body: e.g., Truog, Miller and Halpern [36], Halevy and Brody [37], Youngner and Arnold [38], Robert Veatch [39], Karen Gervais [40], John Lizza [41]. They, too, doubt that functioning brain-dead bodies should be classified as corpses or dead organisms.

Err on the Side of Life

Listen to the words of the renowned Catholic physician, bioethicist, Georgetown professor and chairman of the G.W. Bush President’s Council on Bioethics, Edmund Pellegrino, who also expressed reasonable doubts [42], as he quotes the philosopher Hans Jonas, a man whose ideas have exercised a salutary but too-little influence on the development of bioethics in the West:

“Ultimately, the central ethical challenge for any transplantation protocol is to give the gift of life to one human being without taking life away from another. Until the uncertainties and imprecision of the life-death spectrum so clearly recognized by Hans Jonas are dispelled, his moral advice must be our guide for all transplant protocols”:

“We do not know with certainty the borderline between life and death, and a definition cannot substitute for knowledge. Moreover, we have sufficient grounds for suspecting that the artificially supported condition of the comatose [i.e., brain-dead] patient may still be one of life, however reduced — i.e., for doubting that, even with the brain function gone, he is completely dead. In this state of marginal ignorance and doubt the only course to take is to lean over backward toward the side of possible life” (Hans Jonas, “Against the Stream,” in in Philosophical Essays [43], emphasis added).

The conversation about whether brain death rightly diagnosed constitutes human death needs to make its way from the heady journals of medicine and bioethics to the pews. Catholics who face difficult questions about whether to submit themselves or their loved ones to transplant protocols based upon a judgment of death that’s grounded in a definition that many reasonable Catholic thinkers find doubtful have a right to inform themselves more fully on the question.

E. Christian Brugger [44] is a senior fellow of ethics and the director of the fellows program at the Culture of Life Foundation in Washington, D.C.