Editor’s note: This is an adaption of her talk at the National Youth Conference, Dec. 12, in Uganda. The full address can be found here [7]. 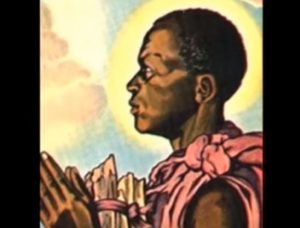 [8]Thank you for the kind invitation to address the 2019 National Youth Conference here in the Diocese of Kasana- Luweero. I am delighted to be able to learn more about Uganda, as I only know a few things about your country. I am aware of the Ugandan Martyrs. In union with the worldwide Catholic Church, I observe the liturgical feast of St. Charles Lwanga and his companions every year on June 3.

I also know that Uganda had a successful strategy for combating the spread of HIV-AIDS in the 1980s and 1990s. Your country did not blindly follow the lead of the international agencies that were promoting condoms as the one and only solution to the spread of the HIV virus. You developed your own program [9], encouraging people to reduce the number of sexual partners they had. And you continue to take a wholistic approach, seeing the person in his social and spiritual context.

I want you to know that many, many Americans share your pro-life and pro-family values. Many Americans have come to realize that the sexual revolution is a totalitarian ideology. Those same Americans are deeply ashamed when they realize how our government has historically thrust the values of the sexual revolution on people around the world, including you here in Uganda. I am not talking only about American Catholics. Eastern Orthodox Christians, evangelical Protestants, Latter-day Saints and observant Jews in America also share your family values. On behalf of those Americans, I apologize for our country’s role in spreading the sexual revolution to your country.

As Catholics, we stand by the Catechism of the Catholic Church, on the death penalty, as on all other serious matters. Pope St. John Paul II revised the Catechism to say:

“The traditional teaching of the Church does not exclude … recourse to the death penalty. … Today, given the means at the state’s disposal to effectively repress crime by rendering inoffensive the one who has committed it, without depriving him definitively of the possibility of redeeming himself, cases of absolute necessity for [the death penalty]… ‘are very rare, if not practically nonexistent’” (2267).

We cannot support the death penalty for homosexuality. We don’t need to belabor the point.

My purpose here today is to convince you that you should exercise all morally acceptable means for keeping the toxic ideology of the sexual revolution out of your country. One step in protecting your country is to refuse to use the terminology of the sexual revolutionaries. They have invested millions, by now, perhaps billions, of dollars to create certain associations of ideas and words. If you use their terminology, you will place yourself at a disadvantage.

For instance, the term “feminist” carries many positive associations for many people. “Feminism” means “freedom” and “equality” and “education for girls” and “women get to have good jobs.”

But “feminism” has other ideas associated with it. “Feminism” means “women don’t really need men,” and “women are too good to waste by staying home and caring for children,” and “children hold women back.” With these associations, “feminism” comes to mean abortion and contraception.

That is why I avoid using the word “feminism.” I urge you to avoid it, as well.

Another important term to avoid is the word “gay.” I strongly recommend that you not use the word “gay,” or even “homosexual.” I especially urge you to avoid these words as free-standing nouns, as in “He is a homosexual,” or “I’m gay.”

These associations with the word “gay” come from the United States. Let me tell you the backstory.

As you know, the United States has the terrible history of importing people from Africa to be used as slaves. The trans-Atlantic slave trade persisted for 200 years. We have spent the past 150 years trying to deal with its aftermath. All of this troubled history has left us with many problems of racial discrimination and prejudice. We have tried to solve these problems with laws forbidding discrimination.

By now, America has a well-developed body of law defining permissible and impermissible differences in how people are treated in employment, housing, education and so on. Unlawful discrimination is treating people differently on the basis of inborn characteristics over which the individual has no control. People cannot be treated differently on the basis of what the law calls “immutable traits.”

The sexual revolutionaries seized upon this distinction between “immutable traits” and “chosen behavior” in American law. Their strategy was to create the impression that “being gay” is comparable to “being black.” If they could succeed in making this comparison, then the whole body of anti-discrimination law could be used to protect homosexual acts.

Let me pause to assure you that American blacks deeply resent the way that the sexual revolutionaries have used this comparison between race and homosexual acts. Many American blacks are serious Christians who oppose homosexual acts. They are deeply offended by what they consider the hi-jacking of the civil-rights movement for defending a set of behaviors and political commitments.

Despite the protests of American blacks, sexual radicals have made a strong effort to create the belief that people are “born gay.” They say, no one chooses to be gay. Being gay is something a person cannot change, they say. It is an “immutable trait.” The sexual revolutionary elites have spent an enormous amount of money and effort to create the impression that these points are true. But none of them actually are true.

We now know that there is no “gay gene.” People may experience same-sex attraction as a deep part of their personality. They may not remember ever feeling differently. But no one is “born gay.” The scientific and psychological professions must now admit (somewhat reluctantly):

In short, “being gay” is nothing like “being black.”

My advice that you avoid the term “gay” is more than just a rhetorical strategy. It is also part of Church teaching. Homosexual desires do not define a person’s identity. This is why the Church uses the phrase [16] “men with deep-seated homosexual attractions.”

So, instead of saying “gay,” use a phrase that more accurately describes what you are actually talking about.

And if any of you, dear young people, find yourself feeling same-sex attraction, do not label yourself as “gay.” Seek help and counseling. But do not let anyone call you “gay,” or draw you into what they call the “LGBT community.” Be assured that, with prayer and counseling, those feelings can diminish, and you can live a normal life as a husband and father or as a wife and mother. These feelings do not define who you are.

That is conclusion my young friend Hudson Byblow came to. He was not very athletic. He was slightly built. The other boys teased him. He was confused about himself. He doubted his manhood. Then an older man molested him. So Hudson thought to himself, “I must be gay.” It took him a long time to overcome the problems he created for himself by adopting that label and the behaviors that went along with it. But now, as he says, he is doing “something more beautiful.” He has moved from “LGBT to Jesus Christ.” [17]

Chattel slavery and the trans-Atlantic slave trade was the old form of Western exploitation of Africa. Today, Western influence has the potential to create an even more serious form of slavery. Jesus told us to have no fear of those who could kill the body. Rather, we should fear those who can kill the soul. And St. Paul warned us long ago about the enslaving power of sin. In Galatians 5, St. Paul told us, “For freedom Christ set us free; so stand firm and do not submit again to the yoke of slavery” (1).

That is why we must continue to be inspired by the Ugandan Martyrs. These martyrs died for their faith at the hands of the king. Sometimes when the story of the Ugandan Martyrs is recounted, the homosexual element is omitted from the story. But we should not omit the fact that the king was a sexual predator who preyed upon young men. The king believed he was entitled to do whatever he wanted and that everyone was required to submit to his desires. Charles Lwanga and his companions refused the king’s sexual advances. The king was enraged and ordered their execution [18].

When Western aid agencies come around here pestering you to adopt their ways, tell them you reject sexual colonialism. Do not accept the lies of ideological imperialism. Remember the Ugandan Martyrs! The truth really will set you free.

Jennifer Roback Morse [19], Ph.D., is the founder and president of the Ruth Institute [20].

She is the author of The Sexual State: How Elite Ideologies are Destroying Lives and Why the Church Was Right All Along [21]