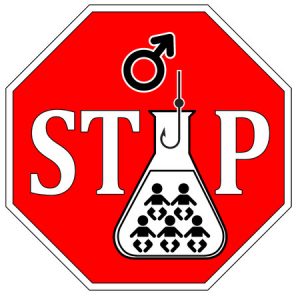 A New Jersey couple, who invested $25K and sacrificed the lives of four other embryos to insure they would have a baby girl, are just one example among many who see nothing wrong with a new trend called “family balancing.”

Breitbart [10] is reporting on the story of Janine Tardibuono who told NJ101.5 [11]  that having her daughter, Gianna Rosalia, after having two boys, was a dream come true. But the way she went about having this little girl is raising alarms about the use of reproductive technology in a modern world.

As Tardibuono described, she and her husband went through in vitro fertilization (IVF) at North Hudson IVF in Englewood Cliffs. The procedure produced five embryos, one of which was female. This embryo was then implanted into Tardibuono’s uterus and, nine months later, their little girl was born.

What the story doesn’t mention, however, is that four little boys died in the process.

Typical of the mainstream media, there’s no mention of the embryos that were thrown away. Instead, it goes on to interview Dr. Jane Miller, medical director at the clinic, who refers to the sex selection procedure as “family balancing.” The doctor says that she is seeing an increase in the number of couples who are using IVF to choose the sex of their children.

“There’s been so much good, solid science that’s progressed what we can do in the embryo lab,” she told NJ 101.5.

She claims to often work with parents from cultures who “value male children” as if this is a good thing. Apparently, she hasn’t read the news [12] about the demographic disaster being experienced in cultures where sex selection procedures have resulted in a lop-sided male to female ratio that is leaving many innocent young people without mates.

Tardibuono admitted to the station that their families were critical of what they were doing and accused them of “playing with God’s plans.”

She rebutted them by saying that “God created these doctors and these people that do the lab work. “So if God created them, then their work is good.”

Obviously, she never heard of free will and how a lot of people created by God use the personal freedom He gave them for evil purposes rather than for good – such as Hitler and Kim Jung Un and serial killers such as Ted Bundy and John Wayne Gacy.

This twisted reasoning is resulting in a new trend where the commodification of children is being raised to new heights.

For example, Breitbart cites a Daily Mail [13]article in which Vice correspondent Isobel Yeung said she spoke to biologists who predict that within the next five decades “we are going to completely change the way we procreate, so having sex for procreation reasons is going to feel a bit old fashioned.”

The Fertility Institutes [14], which operate in the U.S., Mexico, and India allow couples to use preimplantation genetic diagnosis (PGD) to choose a child’s sex as well as screen them for genetic defects. In fact, they are currently encouraging couples to commit the ultimate discrimination by offering a “special sale [15]” – a discounted fee of $14,880 for cycles with PGD gender determinations made until June 30, 2018.

As one couple told Yeung, they chose IVF for fertility problems, but then decided to select the sex of their child while they were at it. Because they both had strong women in their lives who they looked up, they decided they wanted a girl who they could raise to be a “strong feminist.”

Being a “strong feminist” has nothing to do with flouting God’s will for our lives and making other people suffer in the process – such as the millions of tiny human lives who are being flushed down the drain in fertility centers for no other reason than because they’re the “wrong” sex.

An authentic feminist does the exact opposite. As we read in Full of Grace: Woman and the Abundant Life [16], she celebrates who she is and the fact that she can be in loving union with God’s plans and thus “be a catalyst of His love in the lives of others.”

Isn’t that what the world needs – love and acceptance of all? Isn’t there enough intolerance in this world already?

Too many so-called feminists run around with their hair on fire over every slight, shouting “discrimination!” and “sexist!” and yet think nothing of committing the ultimate discrimination against the unborn babies they abort and the tiny embryos they toss down the drain because they were inconvenient or didn’t match their specifications.

We can only pray for those who resort to “family balancing” to get what they want. As history has proven over and over again, whether one is a believer or not, standing in opposition to God’s will never ends well – and that’s something technology will never change.

© All Rights Reserved, Living His Life Abundantly®/Women of Grace®  http://www.womenofgrace.com [17]