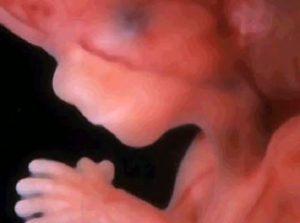 [8]The anniversary of Roe v. Wade and Doe V. Bolton approaches, marking the beginning of the debate over whether abortion is truly a Constitutional right and what that looks like in daily life.

Abortion advocates argue for access to their product along with federal funding and accommodation, justifying their demands because they say they have a legal product found in the Constitution. And since 1973, they have the court documents to prove it despite the uneasy legal foundation even in the eyes of six Supreme Court justices.

Though a right to abortion is never mentioned by the authors of our nation’s birth certificate, abortion has been hung on the concept of privacy (also not mentioned in the Constitution) and defended for more than 45 years.

But given the blanket assertion that constitutionality equals governmental facilitation, let’s consider how that might apply to something actually found in the constitution at our founding … the right to bear arms … actual guns that are sold with considerable scrutiny.

Ending preborn life should be an absolute right especially for the poor, according to Planned Parenthood’s new President, Dr. Leana Wen, who is direct that ending preborn life is necessary to avoid class struggle.

“Our narrative on choice is incomplete without recognizing choice is predicated on privilege and it’s all of our responsibilities to fight against systemic injustices that have gotten us to where we are,” she told ThinkProgress.

But why stop at abortion when it comes to issues of life, death and justice for the poor?

Those in poverty also endure an increased crime rate. In fact a recent study found that “the poorest Americans are 12 times as likely to be sexually assaulted as the wealthiest.” Does that mean government subsidized guns should be made available for their protection, to save their lives or their bodies from harm? Wouldn’t that also be a pro-woman policy — federally funded guns and gun safety classes in the name of access to a constitutional right that should not be unavailable because of financial resources?

Access is an important word for the abortion lobby today that could be defined as a commute. A 2017 story at CNN noted a study showing that women traveled 11 miles to get an abortion for the most part. The abortion lobby finds this a bridge too far, and in fact any travel for abortion is a problem.

Recently, the former governor of California, Jerry Brown vetoed a bill that would have forced California publicly-funded colleges and universities to dispense chemical abortion drugs on campus, pointing out that studies showed abortion facilities were 4-6 miles from every campus, and therefore reconfiguring school health centers into abortion vendors was “not necessary.”

Abortion advocates were outraged. “There are so many campuses where the pill is not close by and even within a mile or two or three, women don’t always have transportation,” Sen. Connie Leyva (D-Chino) told reporters.

Writing in the LA Times, columnist Robin Abcarian observed: “It takes a particularly privileged, out-of-touch person to tell California college students that it’s no big inconvenience for them to travel up to seven miles to obtain an abortion pill.”

Imagine the outrage when people find out that the average commute to a job is 16 miles each way or that gun stores are not easily accessible by all Americans and require background checks and other time consuming screens.

But in the name of access, abortion vendors have also fought against health and safety standards like an emergency plan if a woman was dying or requiring that an abortionist operating an abortion facility follow the safety laws that govern other types of outpatient medical centers. Case in point, Whole Woman’s Health v. Hellerstadt in which Texas officials had to fight for such protections.

Sadly abortion “access” won the day as Justice Stephen Breyer wrote for a five-justice majority finding, “We conclude that neither of these provisions offers medical benefits sufficient to justify the burdens upon access that each imposes.”

Abortion advocates are practically libertarians in their free market view of their product as any regulation that slows down an abortion from taking place is too horrifying to imagine. Imagine burdening abortion vendors with women’s safety.

With the logic of the abortion lobby, a short commute, a federal subsidy, and an unregulated process are hallmarks of a constitutional right. It’s a less-is-more philosophy until it comes time for taxpayer support.

Some may call this an apples and oranges comparison, between abortion and gun ownership, as guns can carry a risk to others, can end life and therefore need some scrutiny. But the same can be said of abortion, which always ends one life and leaves another harmed by the experience.

Most of the time, that fact that something is constitutional opens the door for a discussion on how to proceed, rather than ends the argument. It’s hypocritical to push regulations of one constitutional right while arguing that something not even mentioned in the Constitution must be singled out as deserving of governmental facilitation and billions of tax payer dollars. Even if one believes abortion is a constitutional right (and I don’t), that still does not mean it should be forced on Americans nationwide and paid for with precious taxpayer resources.