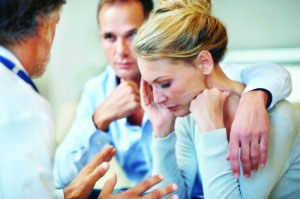 [8]by
Liliana Cote de Bejarano, MD, MPH
About 1.5 million couples in the United States opt for sterilization every year .1 According to the Guttmacher Institute, 9.9% of couples in the US use vasectomy as a contraceptive method, and more than 500,000 vasectomies are performed in the United States every year.2 The medical community and most family planning advocates consider vasectomy safe and simple. This pamphlet provides current research on vasectomy that indicates the procedure has a number of short- and long-term complications and is not a healthy choice.

What is required for fertilization?

Fertilization of a woman’s egg (ovum) requires sperm from a man. Sperm is produced in the male testicles. Around 4.25 million sperm are produced per gram of testicular tissue per day, and the average testicles weigh 16.9 grams. Sperm matures, becomes motile, and is stored in a structure called the epididymus, located in the side of the testicles. From the epididymis, sperm is transported by the vas deferens to the seminal vesicles and the prostate gland. Secretions from these glands contribute 90% of the ejaculate. The total ejaculate is then transported to the urethra/penis.

What is male sterilization?

How is vasectomy performed?

To perform a vasectomy requires three steps. First, the vas deferens is found by a single or double incision in the scrotum (skin that surrounds the testicles) with a scalpel, or without scalpel using special instruments. Second, the vas deferens on each side is disrupted by cutting, burning, or clipping, with the edges sewn or not. Finally, the scrotal tissue is closed.3

Is vasectomy 100% effective in
preventing pregnancies?

Recent research indicates that one or two women per 1,000 per year become pregnant when using vasectomy as a means of birth control.4 Pregnancy may result from natural healing, or failure in the surgical procedure.

Are there short-term complications?

Vasectomy causes damage to a healthy part of the body. As a consequence, males can suffer anatomical, hormonal, immunological, psychological, and social changes that are undesirable. Early complications include local hematoma, bleeding, swelling of the scrotum (range 2-29% of cases), and infection of the skin, urinary tract, testicles, or epididimus (range 12-38% of cases).5 Inflammation of the testicles and epididymus may require antibiotics and anti-inflammatories to resolve.
An additional potential early complication is the formation of a sperm granuloma. After vasectomy sperm production continues at the same rate as before since the testes do not “know” that the outlet system has been obstructed. Pressure builds in the entire tubular network proximal to the vasectomy and the testes eventually respond to this feedback by slowing production and shutting down entire areas of sperm production. In the meantime, however, the pressure may cause sperm to leak out the end of the obstructed vas. Because sperm contain only half the chromosomes of the body’s cells the immune system thinks they are foreign invaders and quickly walls them off, creating a firm nodule of tissue at the end of the vas. This so-called sperm granuloma may become quite tender to the touch and require removal for resolution of the pain.

Are there long-term complications?

Because vasectomy blocks the natural way to evacuate sperm, a buildup in pressure breaks down the natural barrier that exists between the teticles and blood, enabling sperm to enter the blood.This is important because sperm contain antigens (substances that can trigger the body’s immune system). About sixty percent of males who elect to have vasectomies develop anti-sperm antibodies.6 These can cause a number of local and full body reactions. Although no final conclusion has been reached about the cause-and-effect relationship between vasectomy and long-term disease, principally due to lack of long- term medical studies, many diseases have been reported in males post-vasectomy. In the book, Is Vasectomy Worth the Risks? the author states that in his medical practice he has encountered many young males who had undergone a vasectomy, and have diseases with unexplained causes. The following diseases have been reported in men after vasectomy: atherosclerosis, psychogenic impotence, rheumatoid arthritis, multiple sclerosis, migraine, hypoglycemia, narcolepsy, thromboflebitis, pulmonary embolism, infection, allergic reactions, kidney stones, and angina pectoris.7

What is post-vasectomy
pain syndrome (pvps)?

PVPS is another complication after vasectomy. It can occur up to ten years after the procedure.8 Some males suffering from PVPS report a sharp testicular pain during certain activities such as sitting, sexual intercourse, or during exercise. Others report dull, constant pain or pain radiating to the scrotal area or the back. Unfortunately, many cases of PVPS are misdiagnosed due to lack of association of their symptoms with vasectomy. The incidence rate for this condition is 1:10 9. Although the cause for the pain is still the object of research, it is believed that distention of the tissues due to pressure, inflammation, sperm granulomas, fibrosis and nerve entrapment
may explain the pain. Removal of granulomas, vasectomy reversal 10, and removal of nerves, and in extremes cases, removal of the testicles, are treatment options for PVPS.

Is vasectomy associated with cancer?

Is vasectomy associated with
psychiatric problems?

Researchers from Northwestern University in Illinois published a study that looked into one patient’s belief that his dementia resulted from his vasectomy.21 His was not a common dementia; it was a relatively new kind of dementia called Primary Progressive Aphasia (PPA). Its onset is characterized by language impairment (aphasia) rather than the forgetfulness characteristic of Alzheimer’s Disease. Another reason for the study was the interesting fact that the testicles and the brain have similar molecular substances. Vasectomy may have a role in the development of PPA based on the immune reactions to sperm after vasectomy and on the similarity of brain and sperm proteins. New antibodies produced after vasectomy may attack brain cells and cause PPA. The authors found that 40% of the men in their study who suffered from PPA also had undergone vasectomies. The study involved a control group of males who did not have PPA, and 16% of that group had vasectomies. The study revealed that PPA subjects had their vasectomy at a younger age—36 years old on average. In contrast, the control group had their vasectomies performed at an average age of 44 years. It appears that longer exposure to this sort of immune attack increases the probability of developing PPA. A recent case report analyzed whether or not the use of steroids (drugs that inhibit the immune system) could modify the symptoms of PPA. The authors of this study found improvement in one
patient suffering from PPA after the steroid treatment. Although more research with large populations is needed, the improvement in this particular case supports the hypothesis that PPA in men may be a treatable autoimmune disease related to vasectomy.22

Are there emotional disorders
related to vasectomy?

Emotional disorders such as anxiety, depression and changes in personality have been reported after vasectomy.23 Men who had undergone vasectomy have reported regret, resentment, and feelings that their masculine image has been threatened.

Are there social consequences
associated with vasectomy?

More research is needed to determine the social consequences from sterilization. It has been suggested that vasectomy can open the door to infidelity and marital instability. Looking to the divorce rate in the USA and other developed countries where vasectomy is a widely used method of birth control, we come to the hypothesis that vasectomy may have contributed to the increase in divorce rates.

Many authors tried to warn about the powerful negative social consequences that would result from the widespread use and acceptance of artificial methods of birth control and voluntary sterilization-such as the potential for abuse by governments which might institute programs of forced abortion and sterilization for population control.24 We can now verify the accuracy of those predictions and see that the voluntary use of artificial methods of birth control and sterilization did indeed open the door to forced abortions and forced sterilizations for population control.

Are there alternatives to vasectomy?

Natural Family Planning (NFP) is a safe, healthy, and effective alternative to sterilization. NFP is morally acceptable. Studies have demonstrated that couples who use NFP are more satisfied with their marriage, and these couples have lower divorce rates compared to couples who use contraception or sterilization.25 For males who have undergone vasectomy, the reversal procedure is an alternative to alleviate some secondary effects and to restore fertility. The reversal procedure is not 100% effective in restoring fertility. Microsurgery is highly recommended. Our web site, www.OneMoreSoul.com includes a list of NFP-only physicians (some offer sterilization reversal in the United States), NFP teachers, and NFP Centers.