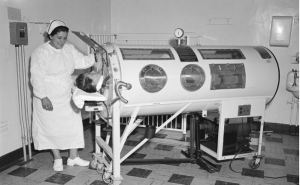 When I was a small boy, polio terrified me. Each year, it would strike thousands of children like me—and you never knew when or where it would hit next. In the 1952 epidemic, a very bad year, there were nearly 60,000 reported cases in the United States and more than 3,000 deaths.

Summer was the worst time, and I recall my parents’ tension as “polio season” approached. Most vividly, I remember my horror at the prospect of being encased in an iron lung. I had seen the photographs: hospital wards with children in iron lungs, only their heads visible outside the great metal beast, a mirror strategically angled so they could view their immediate surroundings.

That long-ago era came to mind the other day as the National Right to Life Committee’s executive director, Dr. David O’Steen, introduced me before a lecture on euthanasia. O’Steen described having polio as a youngster and wondered whether the same unequivocal commitment to recovery that he and his fellow patients experienced would continue to prevail in a health care system increasingly driven by utilitarian decision-making and cost-containment imperatives.

In those difficult days, there was never any question of letting a child with polio die based on a determination that his or her life would not be worth living. This included my late friend Mark O’Brien, who contracted a catastrophic polio infection at age 6 and spent most of his nearly 44 remaining years in an iron lung. Even so, Mark graduated from UC Berkeley, became a journalist, a published poet, a disability rights and anti-assisted-suicide activist. (He was the subject of the Academy Award-winning documentary Breathing Lessons and a motion picture, The Sessions.)

It’s comforting to believe today’s far more sophisticated health care system would swing into action should a similar decades-long epidemic leave tens of thousands of disabled children in its wake. To be sure, medicine’s full armamentarium would be deployed to treat the acutely ill and find a vaccine. But what about the Mark O’Briens—people whose lives might be saved with extended intensive interventions, albeit with a high probability of profound disability? Would they receive the same unequivocal commitment as during the polio epidemic, or would the greater impetus be toward letting them die—with “dignity,” of course?

And if the patients and their families insisted on continued care against medical advice, would hospitals and doctors force them off life-sustaining treatment—would care be deemed “futile” or “inappropriate,” to use the jargon already prevalent among bioethicists? Indeed, would seriously disabled patients such as Mark be considered candidates for the lethal “treatment” of euthanasia, as they are today in the Netherlands and Belgium?

I fear so. At the very least, I suspect that the unequivocal commitment to saving the life of every polio victim that so benefited America’s O’Steens and O’Briens in the 1950s is already a relic of the past. Today, people with disabilities often complain about being pressured by hospital personnel to sign “do not resuscitate” orders under circumstances in which able-bodied patients are not. Families of elderly patients and parents of children with developmental disabilities may meet similarly cold attitudes.

Victims of a contemporary polio-style epidemic might even be rationed out of receiving expensive treatment based on principles of “distributive justice.” This would especially be the case if the disease, unlike polio, affected their cognitive capacities. Thus, bioethicist Ezekiel Emanuel—an influential adviser on Obamacare—strongly implied in a 2009 Hastings Center Report column that care considered basic for most people should not be guaranteed for those “who are irreversibly prevented from being or becoming participating citizens. .  .  . An obvious example is not guaranteeing health services to patients with dementia.”

And how would people caught up in such an epidemic fare if we ever adopted the “quality-adjusted life year” (QALY) form of medical rationing, currently applied in the United Kingdom and popular among bioethicists? For example, the New England Journal of Medicine called (unsuccessfully) for QALYs to be deployed as a tool of Obamacare cost containment, saying “the best way to improve health and save money at the same time is often to redirect patient care resources from interventions with a high cost per QALY to those with a lower cost per QALY.”

What does that mean? QALY formulas can be complicated, but to illustrate the concept, consider a highly simplified hypothetical. Let’s say I have a serious illness and that Medicine A will give me two calendar years of life as an able-bodied man, or two QALYs. Now, let’s say that my friend and contemporary Mark O’Brien is sustained by an iron lung. Let’s say he has the same illness and Medicine A would also give him two calendar years of life. Because he is confined to the breathing contraption, his two remaining years might be deemed worthy of only a .5 QALY. His continued life would be deemed of less benefit than mine due to his disability.

Next, the cost of the treatment is measured against the perceived benefit. Let’s say the cost for each of us would be $200,000. Under a QALY rationing system, I would be more likely to be approved for the treatment than Mark because that expense would buy me 2 QALYs and in his case would buy a mere .5 QALYs.

In supporting such an invidious system, the authors of the NEJM article deploy an extreme example:

For that matter, the QALY approach dictates that if the situation were reversed and the child had the severe cognitive disability, the child would be allowed to die while the older adult received support.

To say that one human life has greater value than another based on health prospects or disability is to declare the most weak and vulnerable among us, essentially, expendable. So David O’Steen was wise to worry. Many things have unquestionably improved in medicine since he came down with polio. But the introduction of a pernicious “quality of life” judgmentalism into the ethics of health care sure isn’t one of them.

LifeNews.com Note: Wesley J. Smith, J.D., is a special consultant to the Center for Bioethics and Culture and a bioethics attorney who blogs at Human Exeptionalism [8].