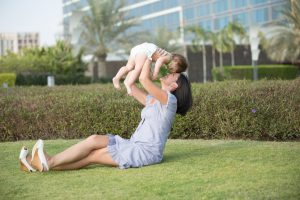 Think about the purity, holiness, and magnificence of the Blessed Virgin Mary. She was the only human being ever to be sinless and constantly in a state of grace. Because Mary was such a beautiful symbol of grace, her mother, St. Anne, must have also been a devout woman of God.

Though Anne’s name is not mentioned in the Bible, we can learn about her from tradition [8] and legends. From these stories we learn that both Mary’s mother and father had a tremendous amount of faith.

Anne and her husband Joachim were an extremely pious couple, but they were unable to conceive a child. This burden weighed heavily on Joachim’s shoulders, so he spent much time fasting and in devout prayer pleading for God to bless him and Anne with a child.

According to tradition [9], Anne also became distraught. She went into her garden and prayed for God to bless her with a child, promising that the child would be dedicated to the service of the Lord. As Anne wept in prayer, an angel appeared and said to her, “The Lord has looked upon thy tears; thou shalt conceive and give birth and the fruit of thy womb shall be blessed by all the world.” Then the angel appeared to Joachim as well, and the couple rejoiced as they conceived a child, whom they named Mary.

For nine months Anne carried in her womb the future mother of Jesus Christ. She was such a pious daughter of God that she was chosen to bear a sinless child who is now the mother of all mankind. God most definitely answered her and Joachim’s prayers.

The story of St. Anne reminds us to continue to have faith in the Lord, even when things look impossible or hopeless. Anne never thought that she would be able to have a child, but she gave birth to the mother of Jesus Christ.

St. Anne understood that all children are a blessing from God and that God alone has the power to decide when the life of a person will begin and end. When God blesses us, it can be easy to merely accept the gift and move forward with our daily lives. But St. Anne did more than receive the gift of a child. She went a step further and trusted in the plan of God by promising her child to God’s service.

As we work to build a culture of life, we can easily become discouraged. But like St. Anne, we must put our faith and trust in God and His ultimate plan for our happiness. We can turn to God and pray for children, pray for an end to abortion, and pray for the gift of adoption. With God’s help, nothing is impossible.

Emily Brown graduated from Mount St. Mary’s University in May 2015. She began working for American Life League this summer and is the director of its new youth department, ALL Life Defenders [10]. She plans on educating and collaborating with young adults all over the country to empower the new generation!