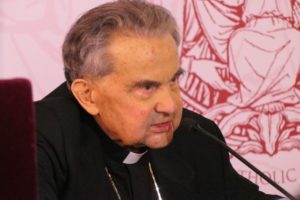 Cardinal Carlo Caffarra, archbishop emeritus of Bologna, Italy, has a key message to deliver: Great efforts must be made in Catholic education and catechesis if the Church is to combat today’s attacks on marriage, life and the family.

In a May 19 interview with the Register in Rome, the founding president of the Pontifical John Paul II Institute for Studies on Marriage and Family, also called on Catholics to be present in the public square and to call things by their real names. “Error is error,” he says. “There is no peace between truth and error.”

One of the four dubia cardinals [8], he preferred not to discuss that topic in the interview, but warned about a current trend in the Church of separating doctrine or theory from pastoral practice, ostensibly to be more pastoral and compassionate. “Theory without praxis is like a wheel without an axis,” he says. “Praxis without theory is a blind man on the road. To give primacy to praxis: First of all, this is theologically false.”

Your Eminence, much is said about the importance of the family. But what does the Church have to do to defend it against gender ideology and other attacks?

I think that the first choice has to be a very clear, very complete and very profound proclamation of the gospel of marriage and of the family, because the situation has now already reached the extreme point, even of putting into question the definition itself of marriage.

Humanity has always defined marriage as the legitimate union between a man and a woman, with a view to procreation and education. Today that definition has been put into question; some juridical laws have even put in place another definition of marriage. It was in this sense that I said that we have arrived at an extreme point. Therefore, the Church needs to say to man: “This is what God had in mind for marriage; this is what Christ has done — because marriage is a path to salvation for a man and a woman who marry.”

The gospel of marriage has two great chapters: The first is the good of marriage in creation; the second is the announcement of the salvation of marriage, which Jesus came to bring forth, both in words and behavior.

We must not forget that the first miracle brought about by Jesus was in favor of two spouses during the marriage banquet. So that is the first thing that the Church needs to do. The second thing, no less important, is the need for great efforts in educating the young generation, because the heart of every boy and every girl desires to love and be loved, in the truth. Otherwise, after a while, the thing becomes boring because it was not what the heart wanted.

So this desire, it is necessary to say, is inscribed, sculpted in the heart of every man and woman. Education is needed to liberate it from all that impedes it, so that this desire is fulfilled.

I’ll give you an example: If there is a stone covering a spring of water, the spring continues to exist, but the water doesn’t flow. I have to get rid of the stone; then the true spring gives all of its wealth of water. It’s as if a stone is covering this human desire, and the Church, with its educational work, needs to remove it.

How can the Church better resist the current crisis she is facing within?

I believe — I’ll say this right away — the point at which we have arrived is a station at the end of a long process. I am speaking of the West and a process that has lasted centuries. It would, therefore, be naïve to think that in a few years — at times, I think, in a few generations — one could correct this process, turn it around. This must be said as a premise. It’s not as if St. Benedict saw immediately the consequences of the communities he founded in the woods around Rome. It was necessary to have a whole process of civilization. We have to always remember this in order not to be naïve.

Coming now more precisely to address the question, I believe there is, above all, a swift-acting strategy, and it is this: We cannot continue to let ourselves get used to this real absence of lay Catholics from places where juridical norms, laws are formed. So there should be a strong presence of Catholics, for it’s not just a good for the Christian; on the contrary, it’s a good that pertains to creation, marriage and the family. However, laws by themselves don’t resolve the problem. Therefore, the more long-term strategy is to busy ourselves in a great educational work.

Third, St. Thomas, at the beginning of the Summa, says that antithesis cannot exist together. He gives an example: He says the doctor, by the fact that he wants the sick person to recover, fights against the illness. Wanting one [the person’s health] means he doesn’t want the other [the illness]. Thomas continues: The wise man seeks the first principle, God the creator; therefore, he fights the error which obscures the truth he is seeking.

Augustine is even stronger: For he says, love the one who errs, but persecute the error. The corresponding Latin verb is one grammarians call emphatic. It doesn’t mean tolerate the error, but tear it out and to show its insubstantiality.

Therefore, there are three things: laws, the presence of Christians in parliaments, public institutions; second, a great work of instruction; and, third, call things by their real names. Error is error. There is no peace between truth and error.

Is the problem today that people do not speak out strongly enough against sin?

Yes, in places of learning. Thomas’ strategy at the beginning of the Summa against the Gentiles [of calling out sin] is not followed. On the contrary, it is even belittled.

I also often saw this when I was the titular pastor in Bologna. In my opinion, in the places of learning, there’s also no education of true love of the truth anymore. On the contrary, many people teach the young that the search for the truth is a sad and useless passion that can breed only intolerance. At this point, the human person is lost and finds himself, the famous philosopher would say, before paths that don’t lead anywhere.

What is your view of Amoris Laetitia in this regard?

First of all, there is a whole chapter on education, which, for me, is very important. Second, the initial chapter is supposed to, through commenting on a Psalm, describe marriage and family life in the light of God’s plan. These are, with regard to Amoris Laetitia, the second part of Familiaris Consortio — all the great catechesis of John Paul II on marriage and the family.

We have a wealth [of teaching] that can help us at this difficult moment. But, says a great German poet, where the danger increases, there salvation increases

Looking back at your time with the Pontifical John Paul II Institute, what, according to you, should be its priorities?

With regard to the institute, I believe I can say it was one of the things dearest to John Paul II. I can show this with numerous proofs. The priorities, the motives, for the research are written in the apostolic constitution, which direct the institute.

Every great pastoral program for marriage and the family points to, and therefore requires, a true knowledge of marriage and the family. It is not the case that, in diminishing the doctrinal dimension, one becomes more pastoral. One becomes more ignorant. In medieval times, they said that theory without praxis is like a wheel without an axis. Praxis without theory is a blind man on the road. To give primacy to praxis: First of all, this is theologically false.

A Christian life without faith is like the house, which Jesus talks about, built on sand. It’s no longer built upon the word of God, so it doesn’t stand. To put charity before the faith through the category of compassion brings us to a street that does not have an exit, if you stop only with compassion. The Samaritan did not stop just to say: “Poor devil, look how they treated him,” and then went on his way. No. He who is truly compassionate takes care of the person, using the adequate instruments, or how do you take care of a person if you don’t know what a person really needs?

The result is disorder.

Thomas quotes this text approvingly. It’s evident that you need to feed a hunger, without which man is no longer a man — he loses his dignity. However, these are not the only needs of man. A great medieval theologian, St. Albert the Great, says that the needs of man are two: in dulcedine societatis inquirere veritatem — “in the sweetness of a good life with others, seek the truth.” This shows us the greatness of the man.

Is the problem that, in the Church, we have lost sight of heaven, that there’s too much attention paid to this world and not the next?

I would say when you speak of the Church you are speaking of such a vast reality. But I would say we’re running a risk of doing this; we are in danger of doing this, forgetting that the Church, at her base, is not an NGO [9] or an emergency room of the International Red Cross. The Church exists, above all, to free man from sin and to accompany him into eternal life. This is the purpose of the Church.

Jesus taught us nevertheless that this implies, also, attention to the human person and his needs. Around Jesus, there were always sick people. Jesus cured them. Jesus found himself before a hungry crowd. Jesus multiplied the loaves. Jesus knew well who Zacchaeus was, that is, a collector of unjust taxes, because taxes can also be unjust.

But he cured him of this profound sickness of the heart. As I was saying before, this is the ultimate end of the Church.