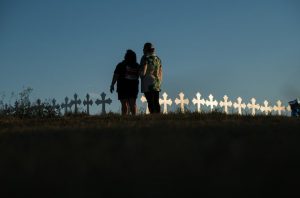 Assessing the grim toll of the massacre in Sutherland Springs, Tex., sheriff’s deputies found 22 of the bodies inside the First Baptist Church, but by their reasoning, one more victim died there — inside the womb of Crystal Holcombe, who was killed in the pews along with three of her five children.

Texas is one of at least 38 states [9] with a law that recognizes a fetus in utero as a potential crime victim separate from the mother, or where stiffer penalties apply when crimes are committed against pregnant women. Federal law recognizes unborn fetuses as separate victims of federal and military crimes.

The laws, some recent and others decades old, are another battle front in the long, passionate political war over abortion and the question of when life begins. Anti-abortion groups have lobbied for fetal homicide laws as part of a broader campaign for “personhood,” hoping to persuade the public to regard prenatal life at any stage of development as a human being deserving of legal rights and protection.

The federal Unborn Victims of Violence Act of 2004 [10] took five years to get through Congress. It gained momentum after the killing in California of Laci Peterson, who was eight months pregnant. Her husband, Scott Peterson, was convicted in 2004 of two counts of murder, one for his wife and one for the unborn child she was carrying.

“This has been a longstanding priority for us, and something we were instrumental in pushing,” said Jennifer Popik, director of federal legislation for National Right to Life, an anti-abortion organization based in Washington. “The principle here is that there’s two victims. For a family already invested in the child, for the grandparents, this is a loss.”

Ms. Popik said that she had not seen prosecutors hesitate to use the laws, even though they have often been politically contentious. “Prosecutors like to have this in their toolbox,” she said.

Abortion rights advocates have sometimes opposed fetal homicide laws out of concerns that they could be used to lay the groundwork for criminalizing abortion. But their stance has depended on exactly how the laws were worded.

Kaylie Hanson Long, national communications director for NARAL Pro-Choice America, said in a statement, “We need tougher laws on the books that increase criminal penalties for individuals who target pregnant women, and we stand with our allies in support of meaningful legislation to prevent future acts of gun violence.”

Ms. Holcombe was one of eight members of the Holcombe family who died in the rampage, including her mother-in-law and father-in-law, a brother-in-law and a niece. The baby she was expecting raises the count to nine. Her husband, John Holcombe, was struck by shrapnel but survived.

Other than in the death toll, the Texas law on crimes against an unborn child will not come into play in this case, because the gunman, Devin P. Kelley, was found dead shortly after he fled the church.

Texas is one of many states with broad fetal homicide laws that define a human being as including “an unborn child at every stage of gestation from fertilization until birth.” The laws in some other states specify a “viable fetus.”

Carol Sanger, professor at Columbia Law School who has written extensively on abortion, said that fetal homicide laws have not been a legal threat to Roe v. Wade, the Supreme Court decision that legalized abortion. Fetal homicide laws are criminal statutes, she noted, while Roe v. Wade concerns a constitutional right.

Fetal homicide laws in some states include language specifying that they do not apply to otherwise legal abortions.

Professor Sanger noted that the campaign to define life as starting at conception was nonetheless making headway in government and elsewhere. A new strategic plan proposed for the Department of Health and Human Services says the department will serve and protect “Americans at every stage of life, beginning at conception.”

The memorial at the World Trade Center in New York, Professor Sanger noted, includes the words “and her unborn child” after the names of 10 pregnant women who died in the terrorist attack of Sept. 11, 2001, and one who died in the 1993 attack at the center.

It is part of a broader effort, she said, “to acculturate us, to get us used to thinking about prenatal life as being like a born person.”